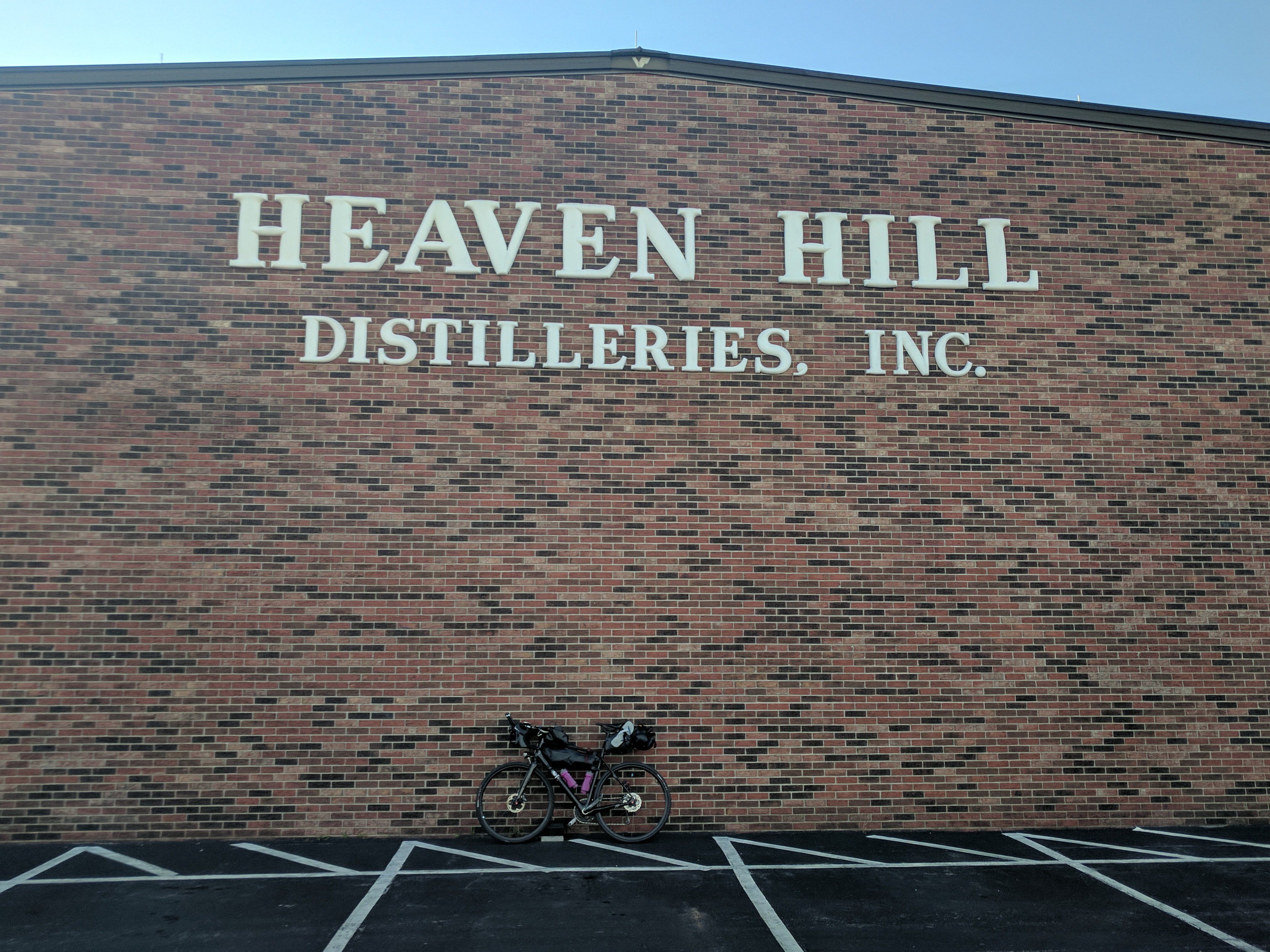 Sunday June 25, 2017: I slept well in intervals that corresponded with the gaps in the Sebree overnight train Timetable. I’d completely forgotten about the rail line which was only about a block from where I had pitched my tent, although with the earth shuddering effects of the coming and going freight trains, it felt a lot closer. Each passing earth tremor was heralded by the world’s loudest and longest horn as well. Despite all this though I felt well rested as I army crawled out of my nylon sarcophagus/tent at around 4:15 am.

I had high hopes for the day. My average daily distance had fallen off a cliff over the last 3 days (195 km per day vs 295 km per day over the first 3 days of the week), and it was time to stop the rot. An early start and a belly full of Burrito and Gatorade (I had purchased extra the night before) meant that I was already ahead of the game.

It was surprisingly chilly as I rolled out of the church grounds at 4:51 am but my mood and the exercise soon warmed me. I made steady progress from Sebree, covering the rolling 75 kilometres to Whitesville in 3 hours. I was not hungry, no doubt the burrito I had had for breakfast would have kept me going strong for another couple of hours but I was low on water, so stopped at the gas station on the main street to restock. As had also become the custom at these morning rest stops I ditched any remaining snacks in my food pouch from the previous days riding which had congealed into a multicoloured mess, washed it out and replenished it with a fresh supply of gummies, skittles, trail mix and peanut m&ms

I had gone into the Trans Am with honourable intentions of keeping my nutrition as unprocessed as possible but unless you are insanely well organised and disciplined, highly processed sugary snacks from Gas Stations are the only way to go. Needs must when you’re burning 6,000 calories a day but when you’re not, ie post Trans Am, the resultant hardcore sugar addiction is extremely tough to break.

Suitably refreshed and restocked I recommenced the days riding heading in a south-easterly direction out of Whitesville on State Highway 54.

As I mentioned in my Day 22 Report, I was to find Kentucky “a rather mind-bending place” but all was rather normal in this part of Western Kentucky, just rolling hills of lush green farmland. The farm plots seemed to be quite small, no doubt family owned and run. Humble, hardworking folk in these parts was the opinion that I arrived at whilst pedalling away. Humble, hardworking folk with strong feelings about the past, as indicated by the many confederate flags flapping in the gentle breeze.

As rooted in the past, although with a very different ideology were the Amish people who also inhabited this part of Western Kentucky. Apparently, they were relatively new to the area having only moved here in the mid 20th Century and it was obvious that the road infrastructure had not been updated to account for their means of transport, horse and cart. As I have mentioned previously a lot of my training was done out in the countryside west of Philadelphia where the Amish have been since the early 18th Century and the roads there have been built with a very wide hard shoulder to give them plenty of room. Alas, no such room for the Kentucky Amish however. Or the Kentucky cyclists for that matter. I love a good lawn. The feeling of it under bare feet, the smell of it particularly after it has just been mown. It is an appreciation that comes from a childhood spent running around on it and playing a whole range of sports on it. Cricket, rugby, golf, tennis. My father spent a huge amount of time in the garden every weekend watering, fertilizing, re-seeding, manicuring and mowing the lawn and over time he would entrust me with various aspects of its upkeep.

The point is, that it took a lot of effort to keep a lawn well kept in the suburbs of Sydney, Australia but out here in Kentucky, the most amazing grass just grew wild. Extraordinarily lush, green, consistent stuff with no sign of weeds growing in it. All you had to do out here was mow it and you could easily have an Augusta National quality fairway in the backyard.

As I pedalled away into the late morning up and down some increasingly steep rollers I had to really fight the urge to pull over to the side of the road, take off my shoes and have a good old lay down in the pristine grass.

The resistance didn’t last long however and as soon as I spied a spot in the shade, out the front of a Church under a tree I rolled on over to assume the position. Spreadeagled on the grass, shoes off, looking up into the blue sky through the foliage of an old oak tree. Although I didn’t fall asleep, the restorative effects of a little 20 minute lay down in the shade, in the grass is quite extraordinary and with a renewed sense of vigour, I got back on my bike.

A couple of hours later, just outside the town of Sonora, I came across an Australian couple who were touring the Trans Am route from east to west. For the life of me, I can’t remember their names which is a real shame as I’d love to get in contact with them to see how their adventure ended up and whether they were able to get to Astoria before their 3 month tourist visa expired. We had a great old chat about all sorts of stuff, wild dogs included and on that topic I rode away from the conversation a lot wiser, yet more concerned. Sure I’d had a couple of run-ins in Missouri but I hadn’t even seen a dog thus far in Kentucky and I was beginning to believe that the dog stories were all just a case of Chinese whispers. Surely it couldn’t be as bad as everyone had made out.

However, my new friends made it crystal clear that it was that bad, and that I’d have the pleasure of finding out for myself soon enough. I was rather keen in finding out how soon and they informed me that the town of Berea which was a couple of hundred kilometres down the road marked the end of the “demilitarized zone” and that it would be on like Donkeykong from that point on.

Oh well, at least I was forewarned. But was I forearmed enough? As I pedalled away from my touring compatriots I began to ruminate about other means of self-defence that could complement my pepper spray and be strapped to my bike. A long stick perhaps or maybe even a police truncheon that I could perhaps buy from a gun shop?

Yep, I was rather concerned about the dogs at this point, or more truthfully, shit-scared. I had a well earned late lunch at a gas station Subway in Sonora and was off the road for about an hour. It is amazing how quickly an hour can pass; order food, eat food, use the bathroom, top up water bottles, buy snacks for the bike, make any required adjustments to the bike setup. An hour barely gives you enough time to just relax.

Such is the rhythm of the Trans Am….it ain’t a bloody holiday!

I was back on the road by around 3 pm, keen to add to the 200 kilometres already in the bag.

A couple of hours out of Sonora the rolling hills took a turn for the less steep, just gentle rollers that required no gear changes. I could just power over the top and build up some nice speed on the descents…..and then repeat. It was very pleasant riding in the late afternoon and with some fire up music pumping through my headphones I was well and truly in the whooping and hollering zone.

It was on one of the descents that I passed a motorcyclist going the other way. There was no debating the fact that he was an outlaw biker, a 1 percenter. He had all the gear, the howling Low Rider Harley, the leathers, the patches, the sunnies, the beard, the attitude etc, etc.

I was in the drops just powering away on the downslope and he was cresting the next hill. As we passed each other he ever so subtly raised his right index finger and nodded his head in acknowledgement. I did the same.

Without crapping on too much it is a moment that I will never forget. Two very different yet kindred spirits of the Open Road, united in their badassery and their abandonment of societies norms.

We were both 1 percenters!

As the late afternoon became early evening the countryside became decidedly more pleasant on the eye. More manicured as wine country tends to be. But this wasn’t wine country it was Bourbon country.

It became pretty obvious that there was plenty of money in Bourbon. I passed massive manor houses surrounded by well-kept crops related to Bourbon production and then golf courses and mansions as I made my way into Bardstown.

It was about 7 pm and I was still feeling pretty good but for some inexplicable reason spent the next hour trying to find a hotel instead of grabbing a quick meal and cracking on into the night. On my second attempt (the first was booked out) I found a ridiculously overpriced hotel about 5 kilometres off route.

As I was checking in I chatted away with the clerk and another hotel guest. They were noticeably awestruck by the fact that I was in a bike race across the country. If it wasn’t for my wild man aesthetic I doubt they would have believed me.

I really did feel like a bona fide 1 Percenter!

Once checked in I rolled across the carpark to a Taco Bell. Ate and drank a lot. Rolled back to the hotel. Showered and hit the sack.