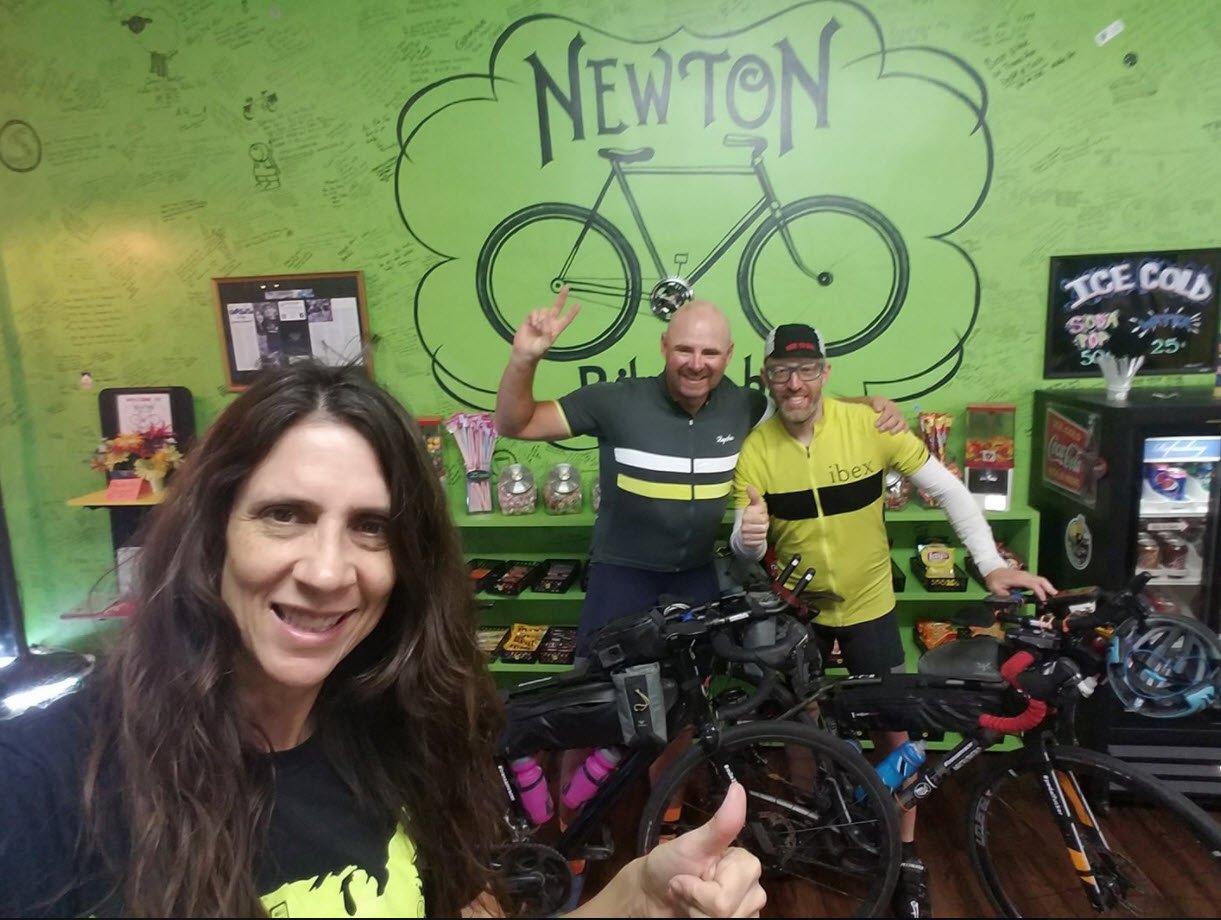 Monday June 19, 2017: Having holed up in a hotel room in Ness City for 24 hours I was well rested but I really didn’t feel like riding my bike.  The intangible force that compelled me each morning to pack up and hit the road regardless of how I was feeling was seemingly no longer with me. Eric’s passing had changed everything for me. The race’s innocence had been lost. The Trans Am was no longer about grand adventure and fun. It was now just about survival. What then was the bloody point?!

Yep, I wasn’t in the best frame of mind as I hit the road that morning at 7:18 am.  The overcast skies matched my mood. I needed to get out of my own head and ride with another racer for a while. I’d made a loose plan with Mike Benigni the night before to ride with him that day with the aim of getting to the legendary Newton Bike together. He was only about 20 kilometres behind me so I would not push the pace and he would hopefully catch up with me at some point. 52 kilometres out of Ness City and the route took its first turn for 450 kilometres, off of State Highway 96 and onto US Route 183. I’d been on State Highway 96 for over 2 days. I will never forget that long, flat, straight, dry, hot and at times windy stretch of tarmac on which I experienced close to the full range of human emotions. Just beside it, 8 miles east of Leoti, Kansas there will soon be a permanent memorial to 2017 Trans Am rider 26, Eric Fishbein. May he be Riding in Peace.

Apart from a change in direction US Route 183 and then State Highway 156 offered little change in scenery and then all of a sudden I was in the largish town of Larned, Kansas. I’d been riding for 4 hours and needed a break and some company. I wasn’t really that hungry but pulled into a Subway for an early lunch. I slso sent a message to Mike letting him know that I would wait for him there. Mike arrived a while after I finished my lunch. We hugged it out right there and then in the Larned Subway. It was quite an emotional moment, so much water under the bridge since we had last seen each other over 12 days ago in Idaho. There was also, almost a tangible sense of relief that we could both now focus on getting through the shock of Eric’s tragedy, together.

Mike got some food and we chatted for a while before heading across the road to a gas station to load up on water and snacks. We downed our Redbull’s, clinked cans and then rolled out of town on State Highway 19 with the joint goal of getting to Newton Bike shop that evening, 175 kilometres away.

We rode in single file for a while and then when the road became particularly quiet we pedalled side by side and chatted no stop. We talked about Eric and about our struggles deciding whether to continue in the race. We talked about our love of cycling and of our families and how truly lucky we were that they had gifted us this time to follow our dreams.

Every now and again Mike would read out a joke sent from one of his kids and we would share a good old laugh.

We were very much on the same page. I could not think of a better person to ride with during that time. We made good time to Nickerson, covering the 95 kilometres in 3.5 hours which included a stop for water and to tape up a broken spoke on my rear wheel. Under normal circumstances a broken spoke would have been a real nuisance but the makeshift fix only need last a few hours until the pros at the Newton Bike Shop fixed it properly. Thank goodness I’d purchased a few spare spokes in Portland before the race. I love it when a last minute plan comes together.

We were hungry and decided to stop for a meal in Nickerson. Despite some rather aggressive and in my opinion poor taste “Pro-Life” billboards on the road into town we found a friendly enough bar for burgers and icy Cokes. Whilst munching and slurping away Mike texted James at the Newton Bike Shop to let him know we’d be there at around 8/9 pm. Future racers: yep, the Newton guys keep an eye on your dot on Trackleaders but as they are so incredibly busy during the Trans Am it is just common courtesy to give them a bit of a heads up as to when and indeed if you’ll be rocking up.

It was hard to believe that we were only 80 kilometres from the famous Newton Bike Shop. Such an integral part of the race and a real milestone of progress. We both couldn’t wait to meet James and Heather whom we had seen on our countless viewings of Inspired to Ride (I believe Mike might have just outdone me at 16 views), and via their antics on social media. We were also excited to talk to our families via the live video feed in the shop.

Fueled with this eagerness to get to Newton, a damn fine burger and numerous Coke refills we hit the road with a little bit of a spring in the old peddle stroke. Back In The Game

Slowly but surely the melancholy of earlier in the morning was dissipating. We were excited about getting to Newton. We had food in our bellies. The road was flat and smooth. The late afternoon sky was crystal blue and there was not a breath of wind in any direction….almost perfect riding conditions.

Earlier that day I had questioned the point of the race believing that fun and adventure, key motivations for participation in the first place, were no longer possible. However, by simply turning the peddles on my bike, moving forward and spending time with a fellow cyclist, these negative beliefs were melting away.

“Life is like riding a bicycle. In order to keep your balance, you must keep moving.”

We were back in the game and we both couldn’t help but smile as you can see in the following photos. Pedal to the Metal

[WARNING: Strava references! I included some Strava stuff in my Day 15 Report, this will be the last time I do so……promise 😉 ]

Ably assisted by some lovely cycling conditions and the whiff of Newton Bike shop hospitality we gave the next 65 kilometres to Newton a red hot crack. Head down, arse up cranking it out. Time Trial effort minus the aerodynamic efficiency.

Speaking of crack Mike was going really hard and it was a real battle to keep up with him to the point where about 10 kilometres from town I had to rein it in a bit and he flew off out in front. He got a tad lost finding the bike shop so I actually arrived just before him. The Oasis in the Grass Desert

I had high expectations of the Newton Bike Shop and amazingly they were well and truly exceeded. What a place. Whoever coined the phrase “Oasis in the grass desert” was definitely onto something there but it is so much more. Now I could wax lyrical for pages on my experience there but for brevities sake I’ll throw a few words and phrases at you in no particular order; amazing hospitality, good people, ahhh thats better, beer, super organised, recuperation, fully stocked kitchen, just like being looked after by mum, Trans Am memorabilia, stories, stand up comedy, for the love of the Trans Am, getting your bike serviced while you sleep, TV studio, live video feed.

Another highlight was the extraordinary display of freshly washed long hair as provided by the 2 Russell’s who had both arrived a few hours earlier than Mike and I. This extra time had afforded them more than enough time to freshen up and I must say I haven’t seen more impressive manes since the glam rock late 80’s.

And yes lads, I was more than a little bit jealous…..as would of the lead singer of Poison. 🙂

Long story short Mike and I were very well looked after and after making an arrangement with Heather to wake us at 4 am, we hit the sack out the back in the hostel.