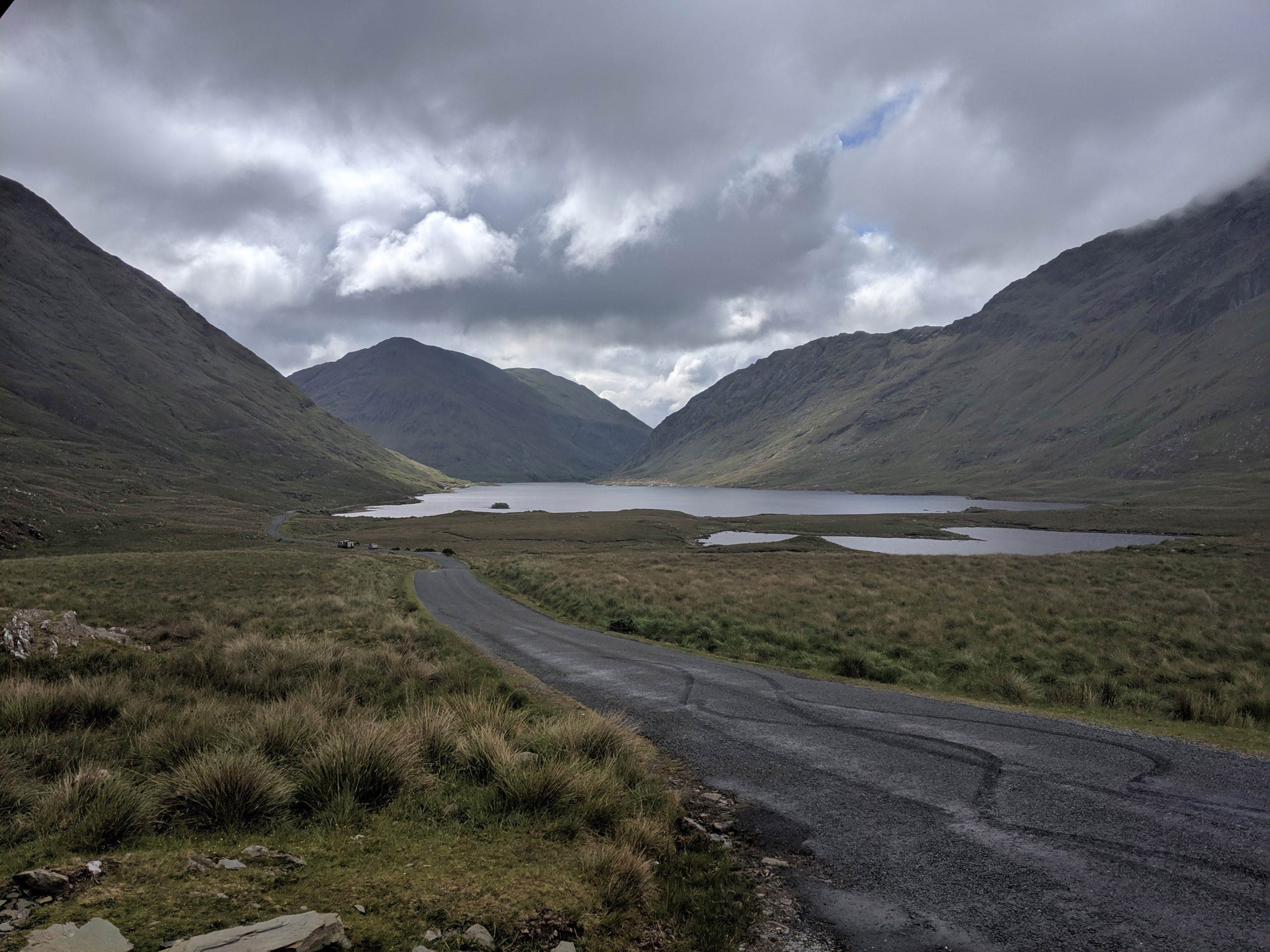 Tuesday June 11, 2019: It had been a late finish yesterday and I’d been so wired from such an exhilarating day that I hadn’t managed to actually fall asleep until well after 2:00 am. I thus gave myself permission to “sleep in” to 7:15 am. I could have done with more, a lot more but I was racing not touring, well trying to anyway. I had checked Trackleaders just before I hit the sack and noticed that I had made up good time on quite a few blue and yellow dots, 15 of which had overnighted at Checkpoint 2, only 60 kilometers up route. I could already feel my body was not capable of another 350+ kilometer day but a solid 250 k effort could well put me in and amongst it.

Speaking of time, ’tis a precious commodity in ultra racing. From the start to the finish, the clock never stops meaning it is absolutely critical to minimise time spent off the bike. Going fast on the bike means bugger all when you spend 2 hours faffing around packing your bike, chatting to other hotel guests and making a pig of yourself at the hotel breakfast buffet.

Which is what I proceeded to do. 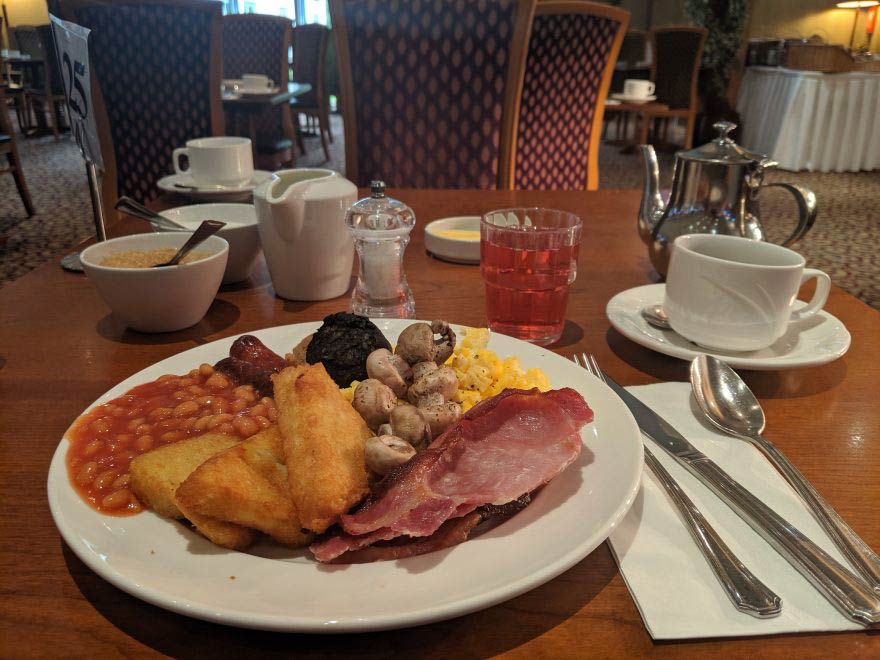 I was feeling a bit sorry for myself once I finally got back on my bike at 9:10 am. Pissed off that I had wasted so much time and in general feeling pretty damn rough. (ref Exhibit A below).

I was in need of some love and took another glance at a whatsapp message from Andrew Shand, a Scottish mate based in Seoul, South Korea who I’d met at the finish of the 2017 Trans Am. At the time he was working near the finishing town of Yorktown, Virginia and had driven up to congratulate his hometown friend, Russell Jones on a strong ride. (Russ also doing this TAW by the way). Anyway, he was following my dot and lending plenty of support via daily messages which were really helping. I look forward to reciprocating during this years Trans Am. Andrew has overcome a pretty hardcore back injury and will be on the start line come June 7. Keep an eye out for his dot and if you want to know more about Pilates he’s definitely your man.

Pedaling out of Westport I got a call from my Dad in Sydney, Australia. I hadn’t spoken to him since the morning of Day 2 in Derry. It was good to hear his voice.

“You had a big day yesterday”.

The old man has always enjoyed watching me compete, namely cricket and rugby as a youth and then as a young man. Unexpectedly for both of us, this spectating has in the last couple of years undergone a renaissance as I set up camp in middle age and he attacks his 80’s. The new sport is age friendly ultra distance cycling. I have adventures and pedal away on one side of the planet and he watches a dot on a computer screen on the other.

Whatever the format; text message, phone call or via road side dotwatchers and trail angels, the support helps, a lot! It can feel very lonely “out there” and knowing someone cares makes a huge difference and definitely spurs you on. 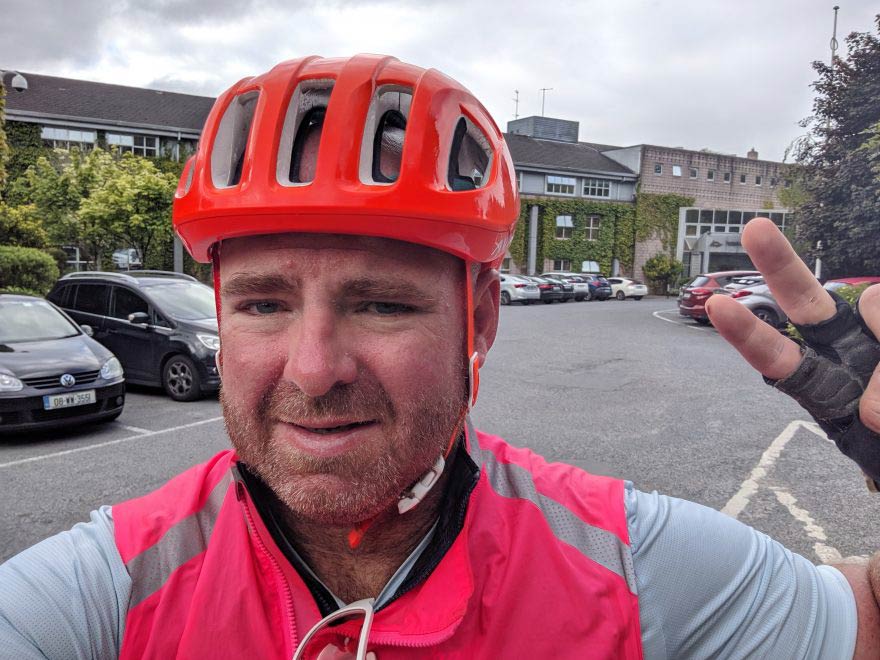 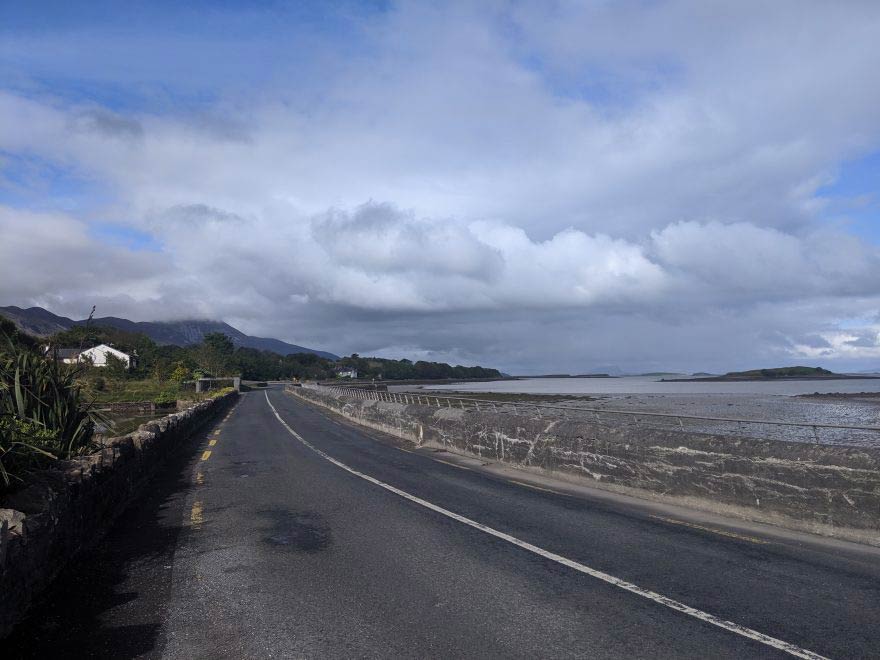 Tuesday June 11, 2019. Heading out of Westport. The Carrowbeg River off to my right. 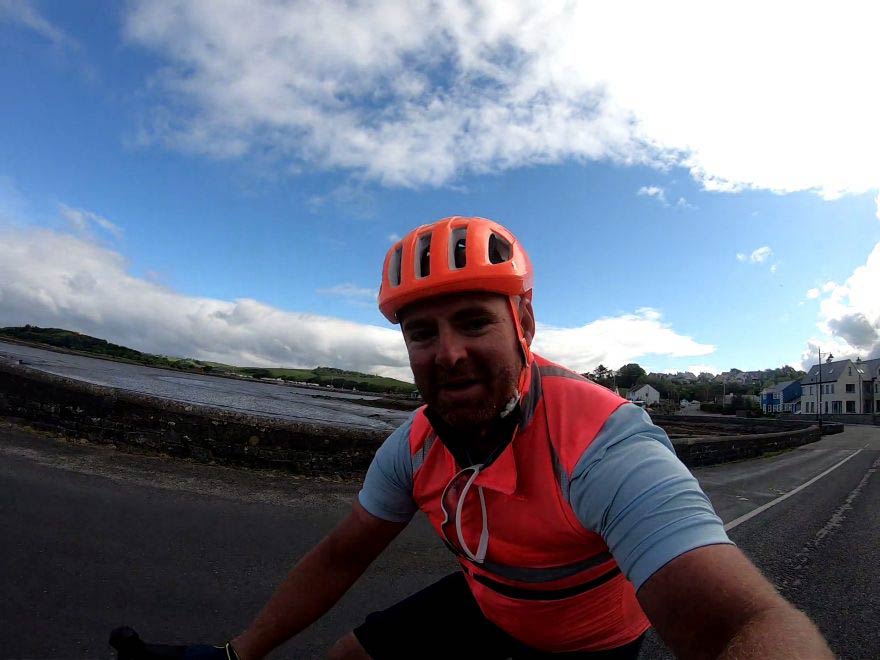 Tuesday June 11, 2019. OK, feeling rough but lets gets this show on the road. (Heading out of Westport)

A Tale of 3 Loughs and 1 Fyord

Perhaps over stimulated by the “support” and a strong desire to claw back some time from the late start I pushed hard early. Too hard as it turned out and I needed a 10 minute breather / lay down only 25 kilometers into the days play.

Heeding my poorly recovered body’s warning I thus chose an easy gear and pedaled on, very much within myself as the R335 rose upwards towards some impressive looking mountains and associated rain clouds. I stopped briefly to put on my rain jacket, something I was getting rather adept at.

As I crested the next hill, quite the scene was unveiled before me. A spectacular view down into a valley, the road winding its way downhill (yay downhill) past a large lake, surrounded on all sides by a series of triangular green mountains. I stopped, as I am sure most TAW riders did, to take a photo. I then quickly remounted keen for the thrill offered by the downhill section.

Topographical bingo anyone? Ireland ain’t a bad place to play.

It was all rather pleasant on the eye but at this point I just wanted to get to Checkpoint 2. 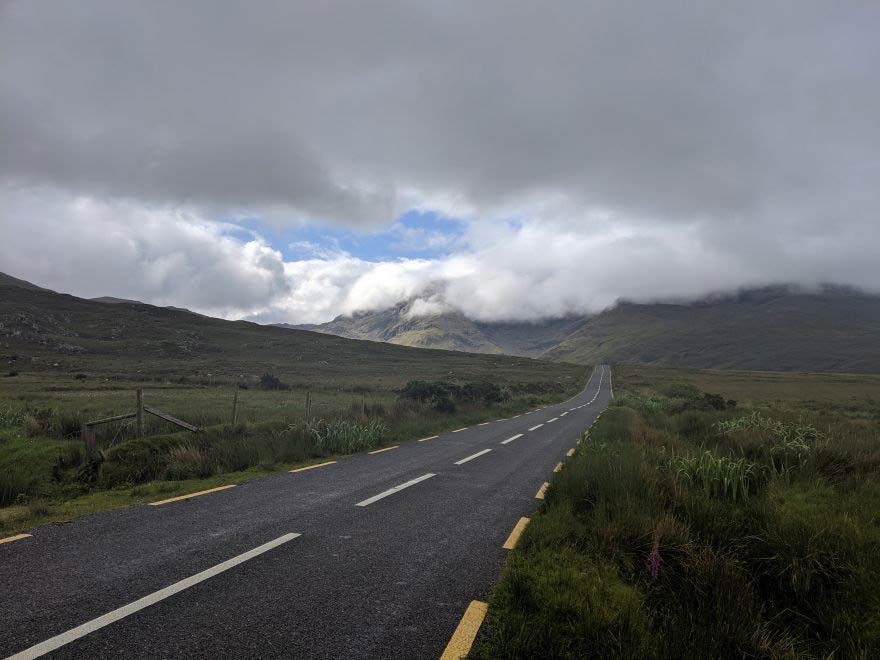 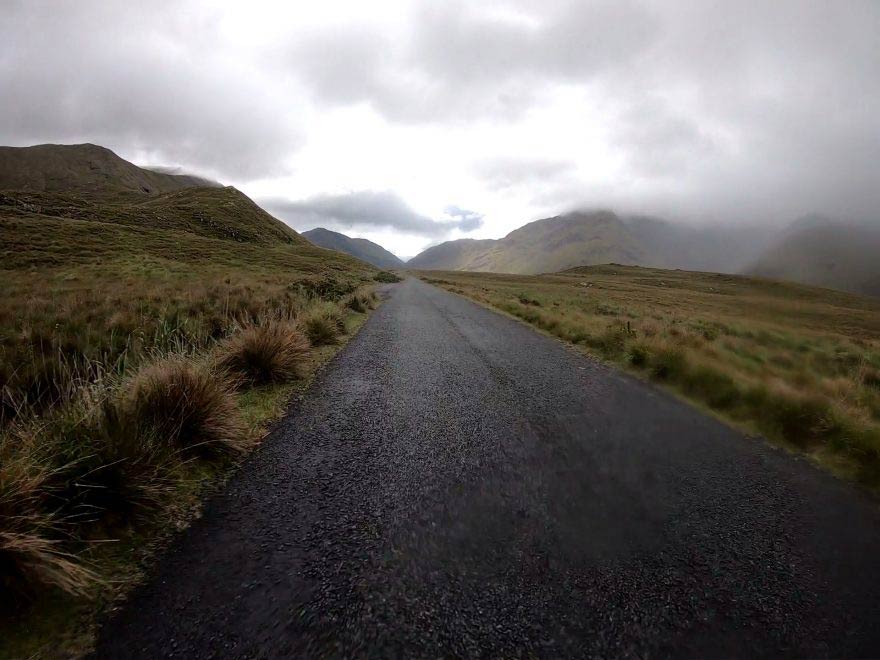 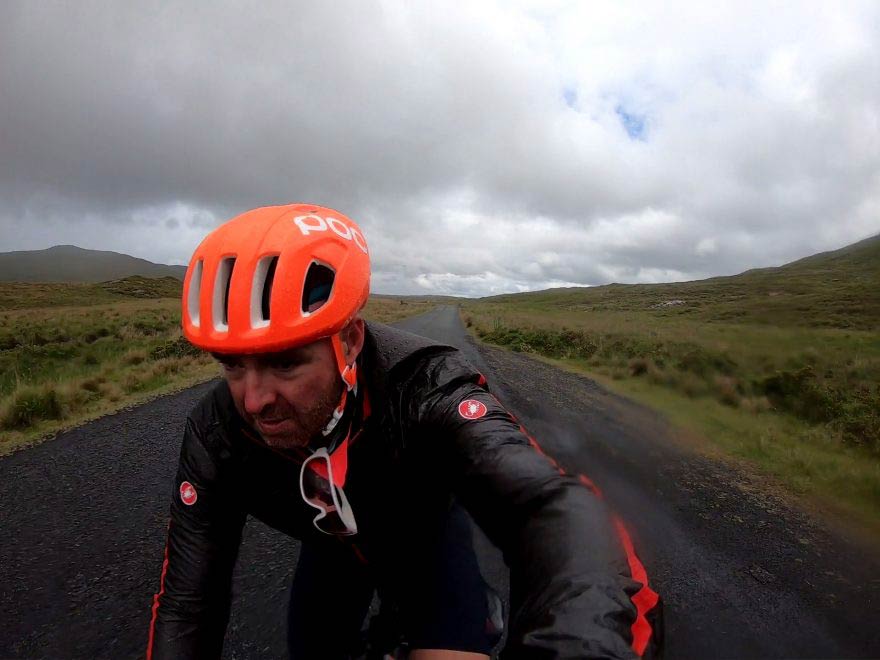 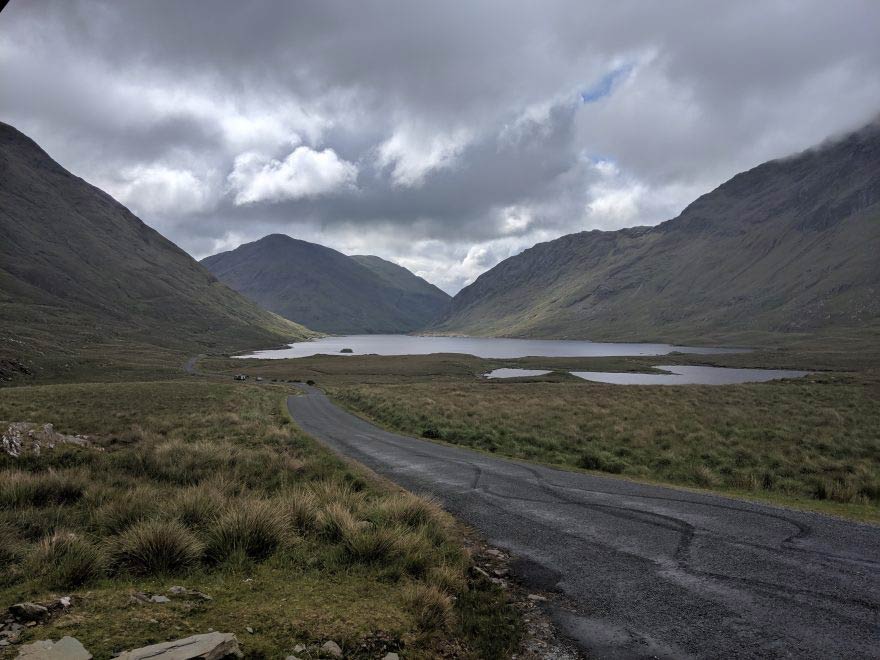 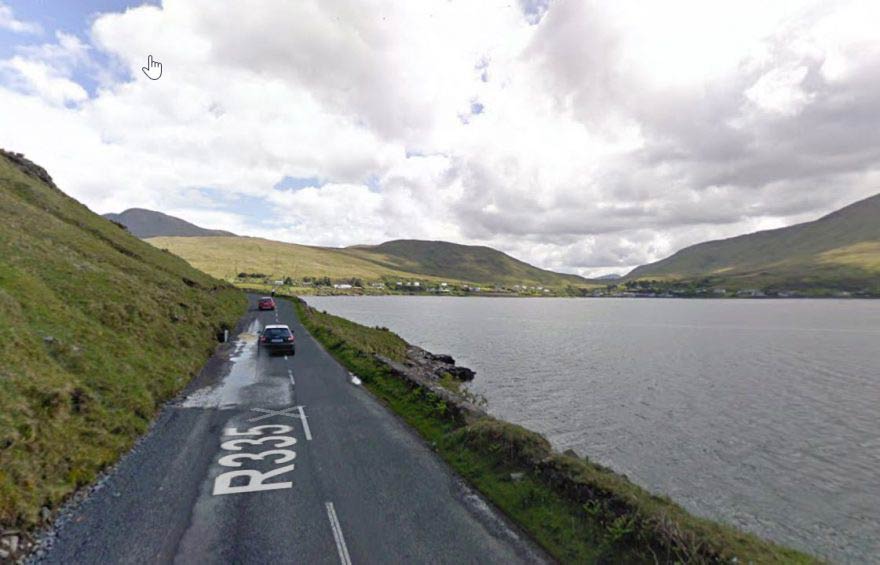 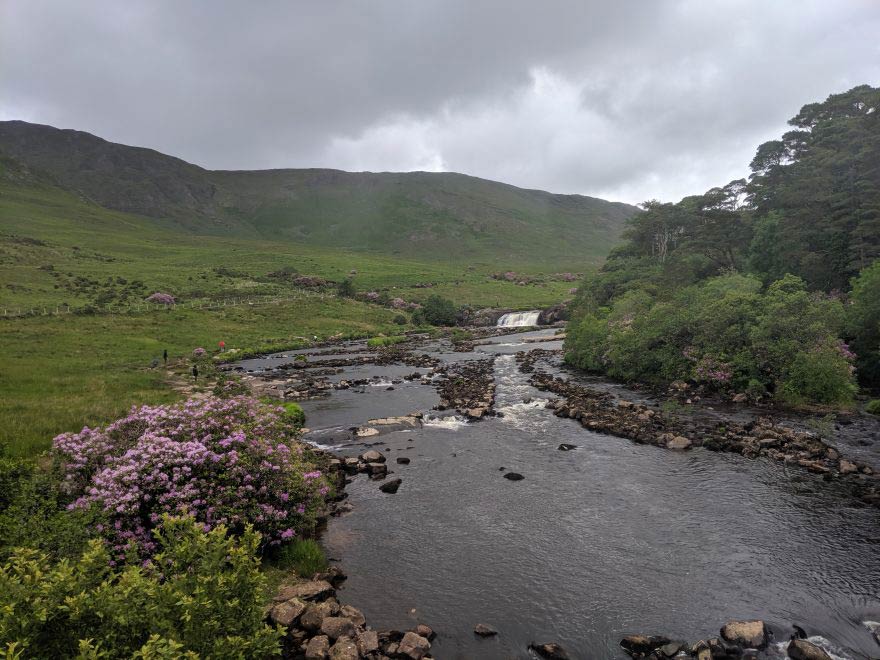 Tuesday June 11, 2019. One of the many streams that flowed into Killary Harbour. This one is the Erriff River. 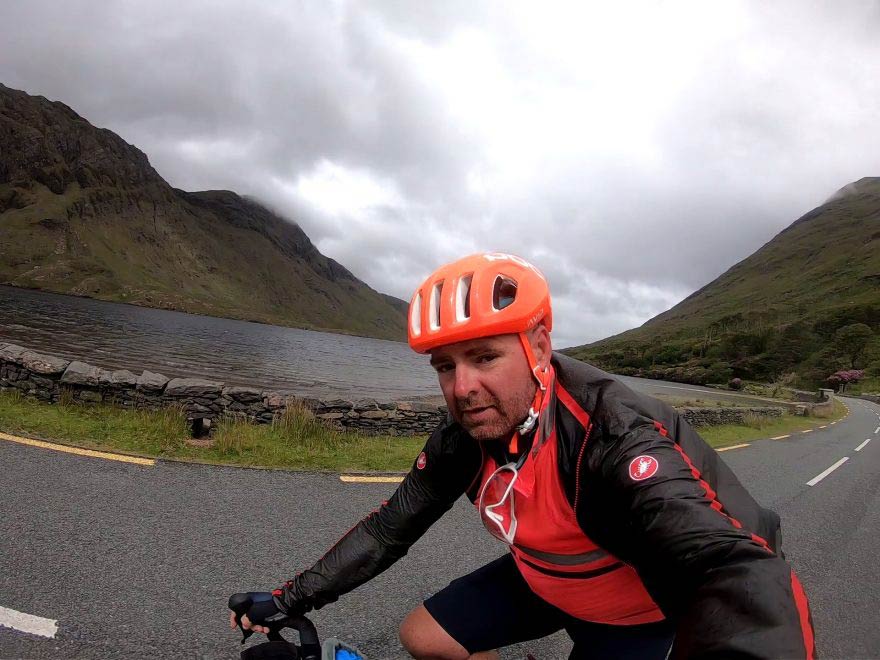 Tuesday June 11, 2019. The Southern side of Killary Harbour. Game face morphing into “I just wanna get to Checkpoint 2” face. 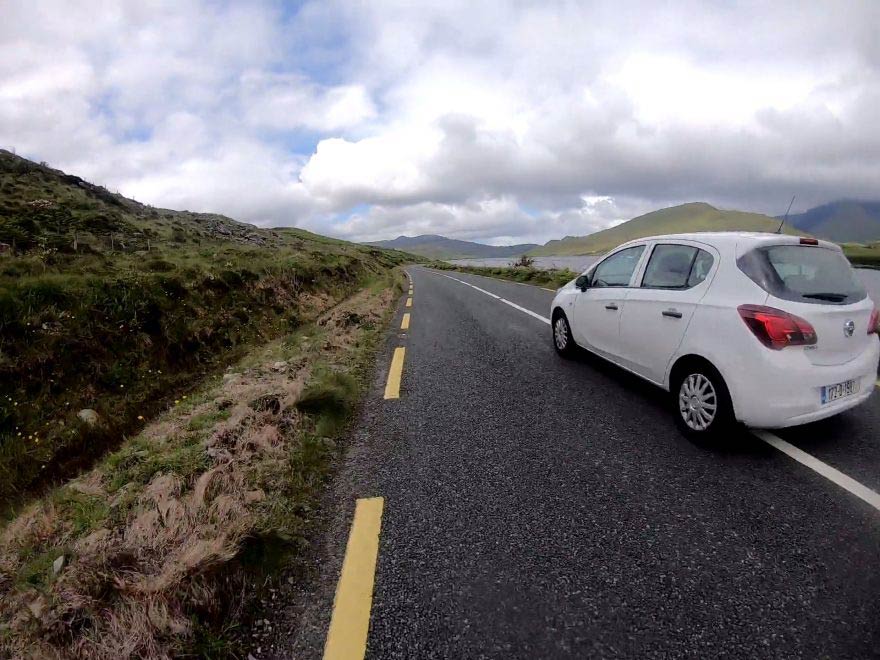 I couldn’t resists a quick pit stop in the lough-side village of Leenaun. It had been way too long between Magnums and Lucozades and there were no guarantees that these essential food groups would be on offer at Checpoint 2. I was not willing to take the risk and so bought up from a little store that adjoined a pub on the main street and then indulged on a picnic table out the front watching the many tourists go about their business.

My race notes indicated that Checkpoint 2 was 5 kilometers out of Leenaun but I hadn’t noted the name of the place where I needed to stop. I just remembered it was a hotel or hostel of some type as accommodation was on offer if required.

As the N69 bent around to the south, away from Killary Harbour I saw signs for the Connemara Hostel and then 100 yards further on for the Killary Adventure Company.

Which one I wonder?

At the time the Connemara Hostel sounded more likely to be the venue you for Checkpoint 2 so I proceeded to roll on down a kilometer or so long driveway to a sprawling campus of various accommodations and outbuildings. I walked around for a while but there were no people or indeed bikes to be seen.

I rang Adrian but the phone rang out….

I finally found signs of life in the kitchen of the main building. A Frenchman, but he had no idea about any Checkpoint 2.

Option 2. Killary Adventure Company. Back up the hill from whence I had come.

Bingo! I soon tracked down Adrian’s welcoming grin and associated bear hug and all became right with the world.

Given I had just wasted 30 minutes finding the place all I planned on doing here was get my Brevet Card stamped, have a quick chat and quickly get back out there. However, I was seduced by the hospitality on full display. Hugs, conversation, coffee and pasta. Pretty damn impressive given these guys had been working around the clock for the last few days ensuring us riders were well looked after.

An hour and a quarter later I finally extracted myself from the warm embrace of Checkpoint 2. It was now 1:30 pm and I’d only banked 60 kilometers. A 250 kilometer day now looking less and less a possibility. Maybe Galway, another 150 odd k’s up route would be more realistic. 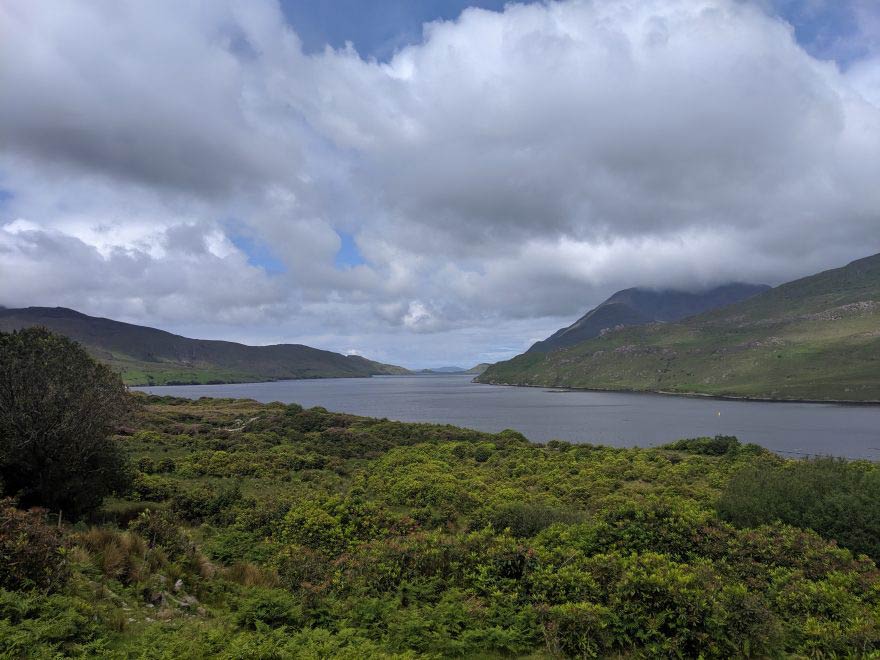 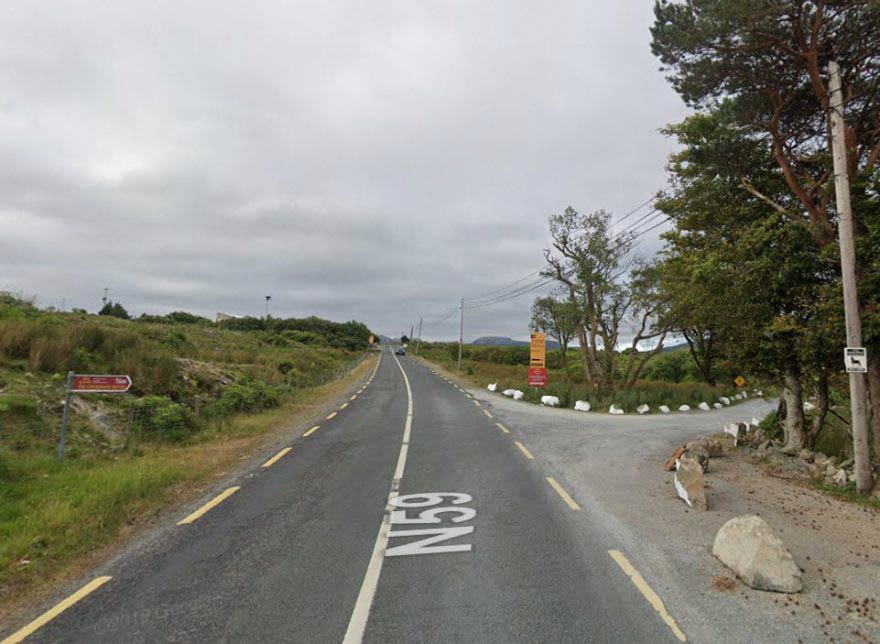 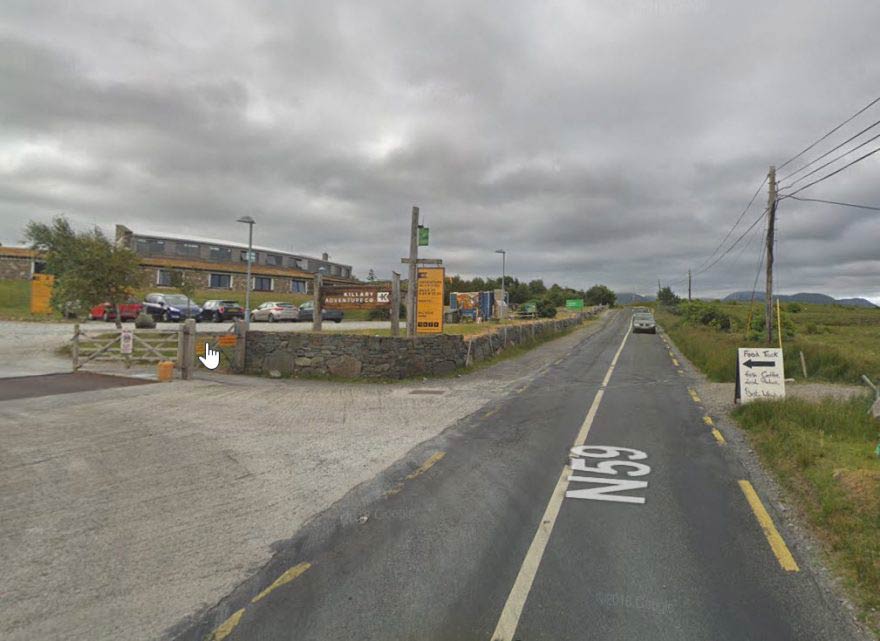 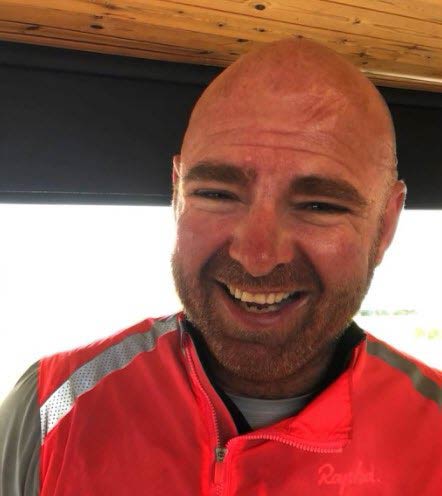 From Checkpoint 2 it was past another Lough and then back to the coast for the standard Wild Atlantic Way scenery of rugged coast, harbors, headlands and undulations.

All very pretty stuff providing ample photo opps but it was slow going. 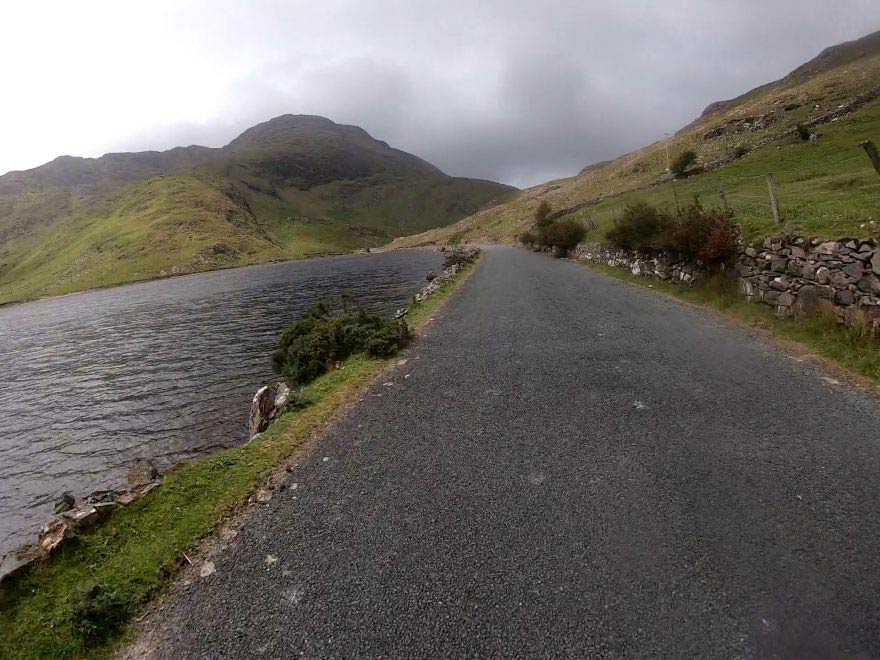 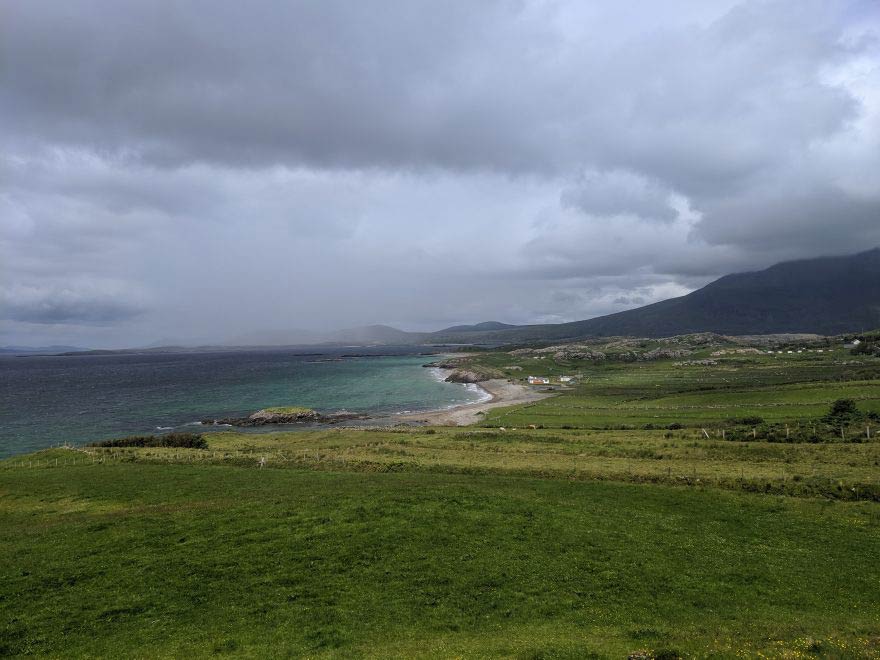 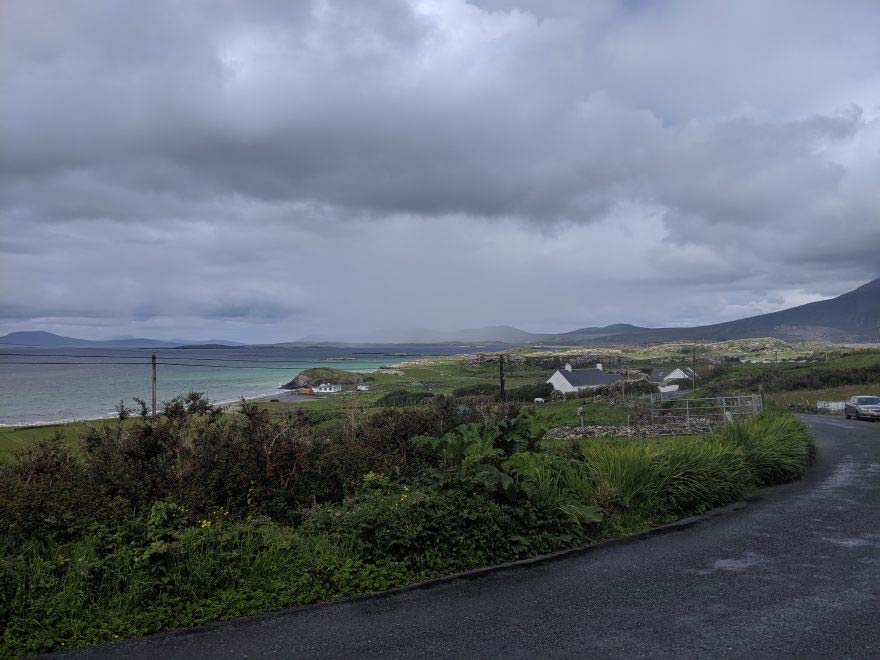 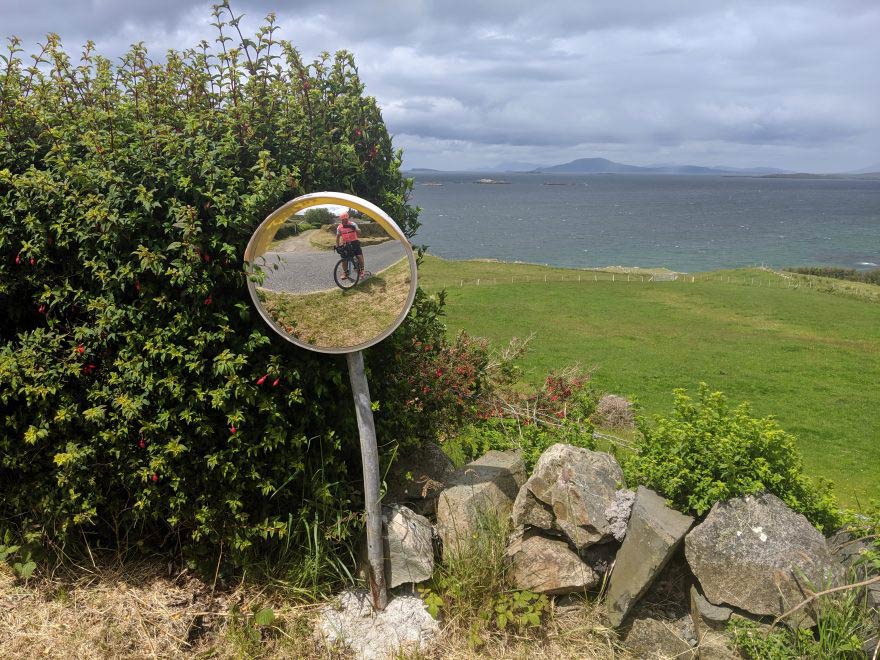 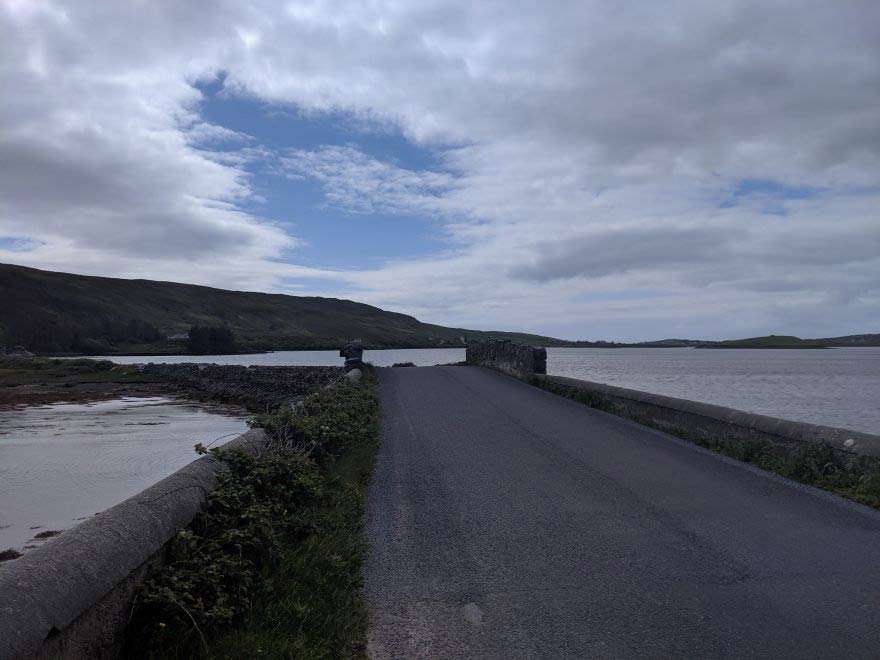 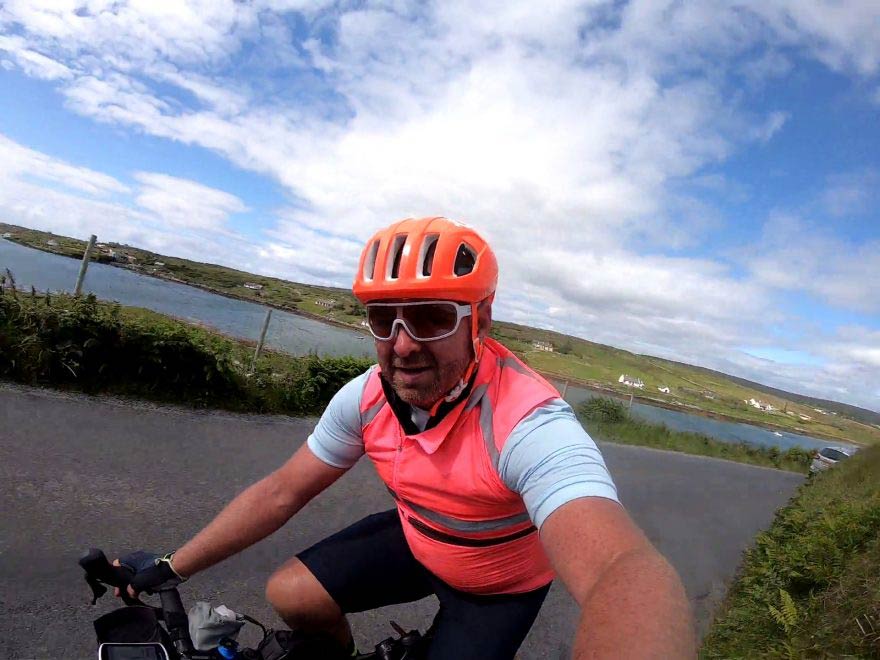 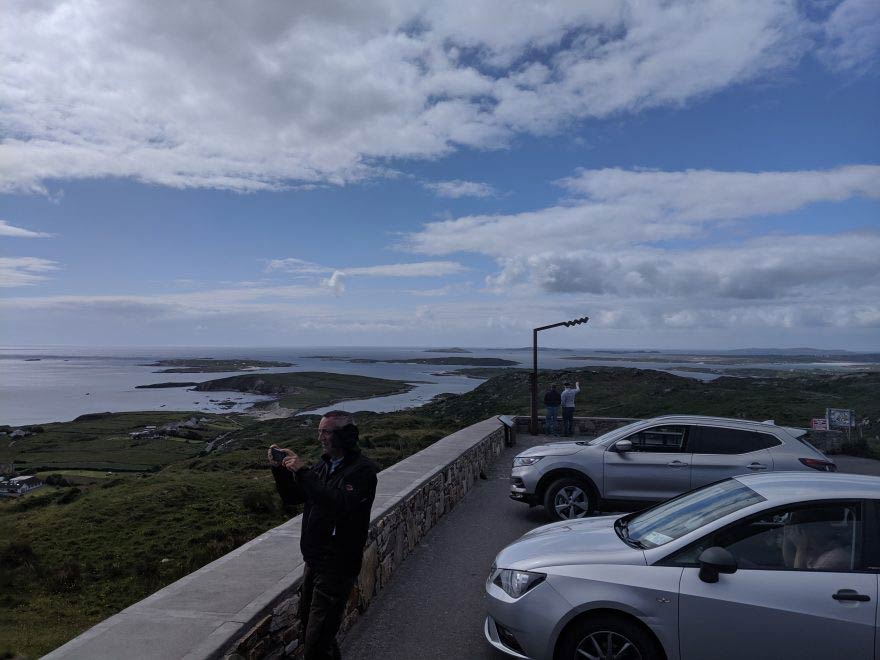 Tuesday June 11, 2019. And yet more coastal views. This one from the lookout on the Sky Road, County Galway. 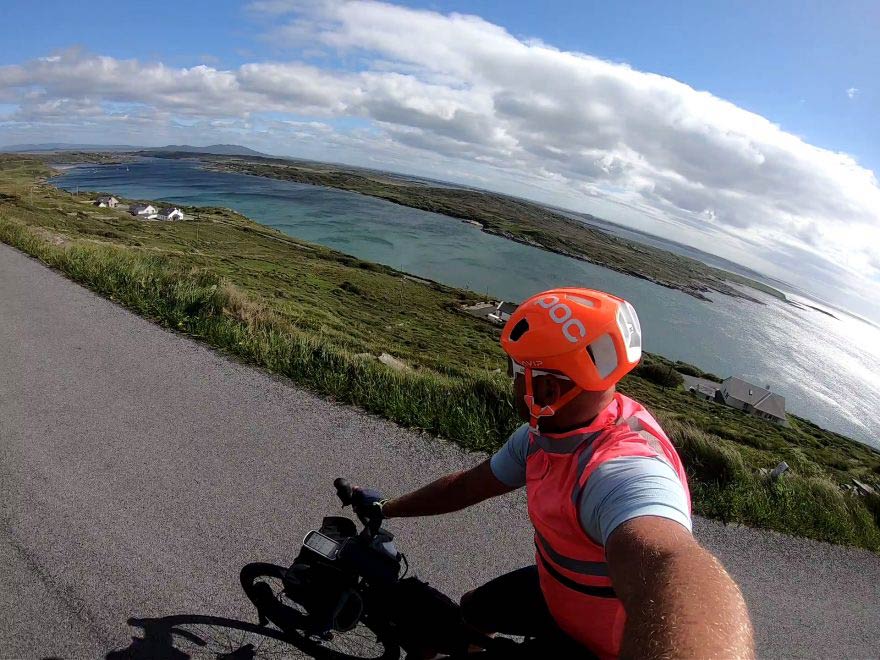 Not so Same Old….

About 5 kilometers past the largish town of Clifden the scenery changed quite dramatically from the standard fare mentioned above to a wide open expanse of bog-land which was pock marked by seemingly hundreds of little bodies of water. This swampy scene was flanked to the north by a mountain range of sharp peaked summits that I later learnt where known as the Twelve Bens. I reckon there were more than 12 but anyway….

It was only a 10 kilometer stretch on an unnamed back road but it felt incredibly remote. Mystical even. The only signs of life was a solitary peat farmer out on the bog harvesting the ancient decomposed plant matter. 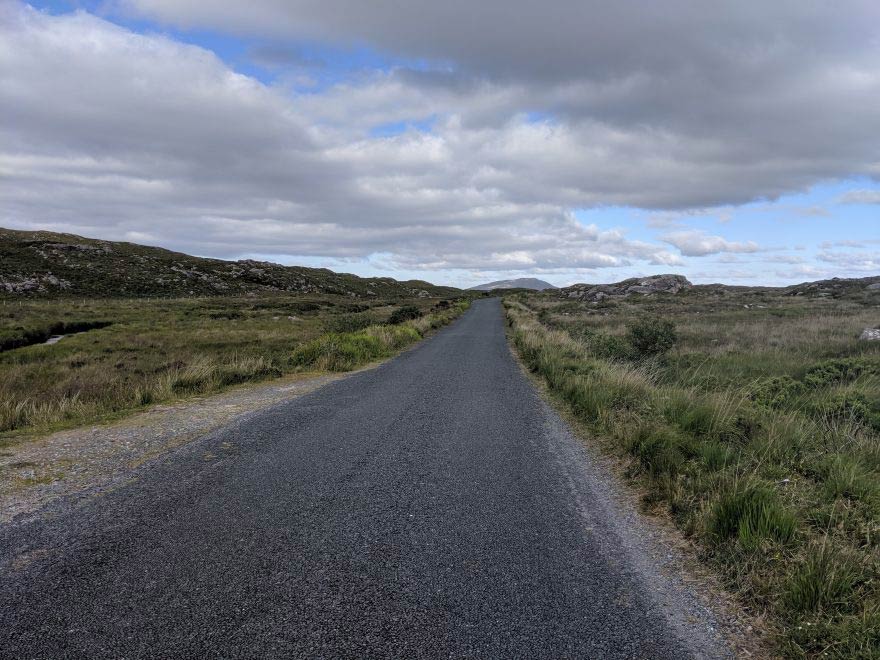 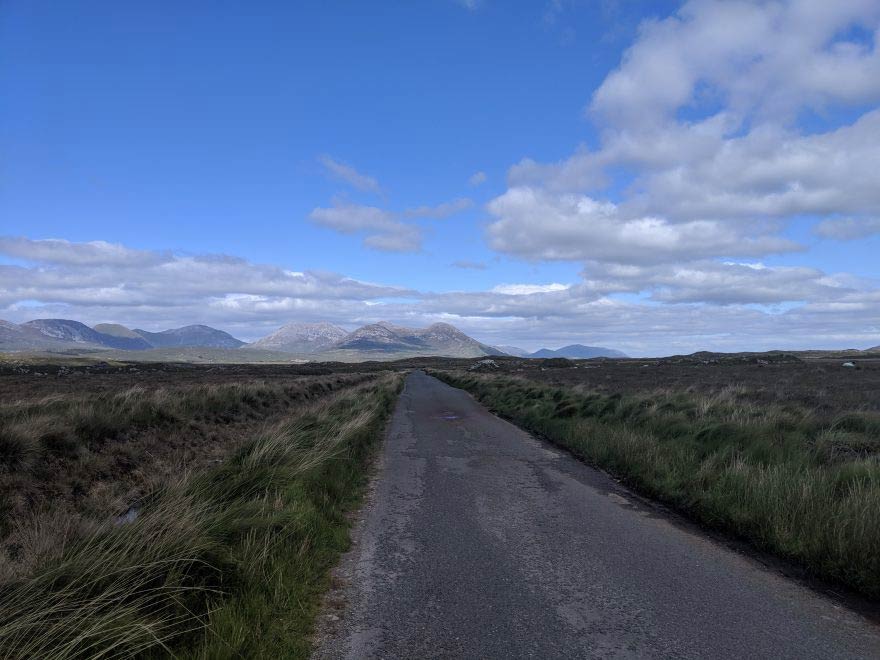 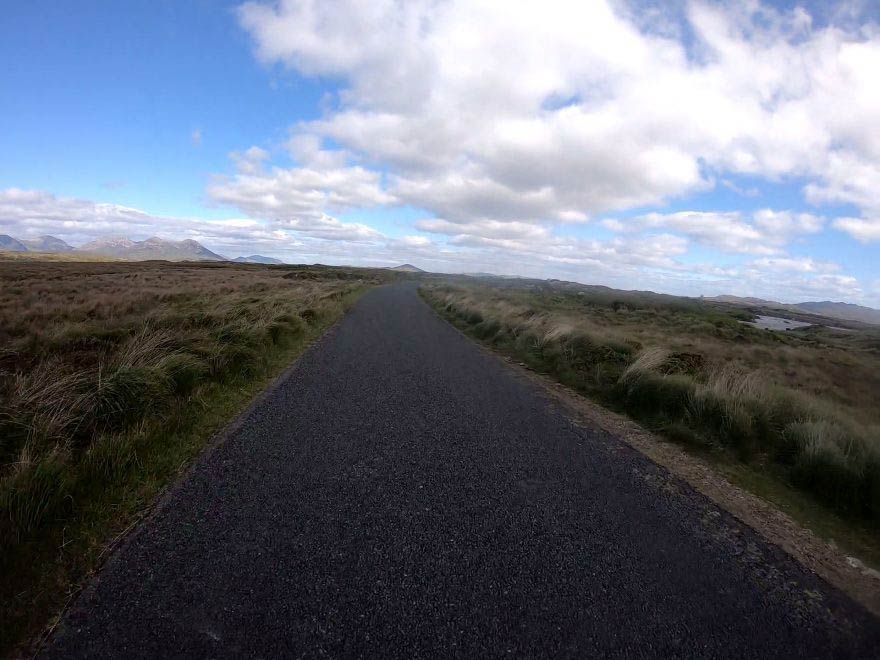 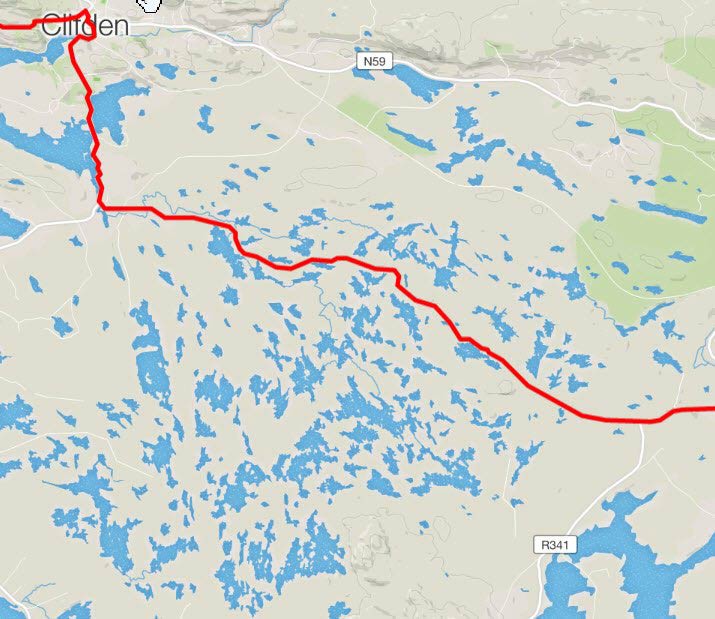 Bing Crosby took Arthur Colahan’s lyrics and made the song ‘Galway Bay’ famous around the world. The first verse goes:

If you ever go across the sea to Ireland,
Then maybe at the closing of your day;
You will sit and watch the moonrise over Claddagh,
And see the sun go down on Galway Bay.

I was pretty damn keen to get to Galway but seeing the sun go down over the bay was the last thing on my mind. I just wanted to get out of the wind, eat and sleep. Where’s the song about that?

The last few hours riding just seemed to drag on, and on, and on. First a section heading south through a wide open expanse of rocky nothingness and sprawling houses along the R336. A stiff breeze blowing at right angles from my left making forward progress tough.

And then a left turn directly into the wind for a mind numbing 35 kilometer effort which took just over 2 hours. Damn sluggish considering how flat the terrain was.

I finally rolled into the city of Galway at around 9:30 pm and headed straight to Galway Hospital. Nother major. Long story short, the days riding had been punctuated by a huge number of piss stops, way more than is usual for me. I was not drinking much too and after checking symptoms online I had convinced myself that I may have a urinary tract infection. It would also explain why I had been felt so shit for the first 4 days of the ride. Anyway, once I saw the overcrowding at the A&E and had a quick chat with a very friendly nurse who informed me that I’d be looking at a 4 hour wait minimum to see a doctor, I was soon convinced otherwise.

It was now getting quite late. I had missed the moonrise over Claddagh and just wanted comfort, food and to shut myself away from the world. I booked the first hotel that I found online and pedaled over to it near the River Foyle. The kitchen was closed and I just couldn’t be arsed heading out again so ordered Uber Eats.

A decent day but I’d have to do better tomorrow if I was to make the finish in Kinsale by Saturday. 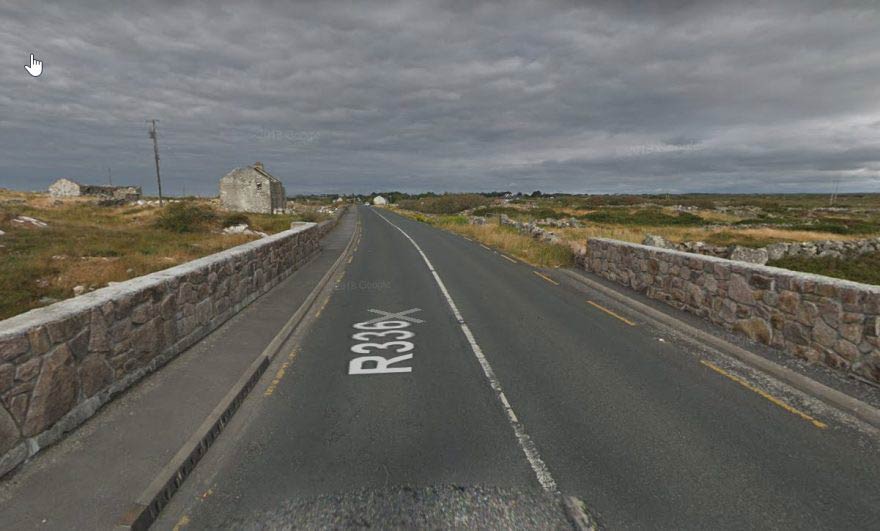