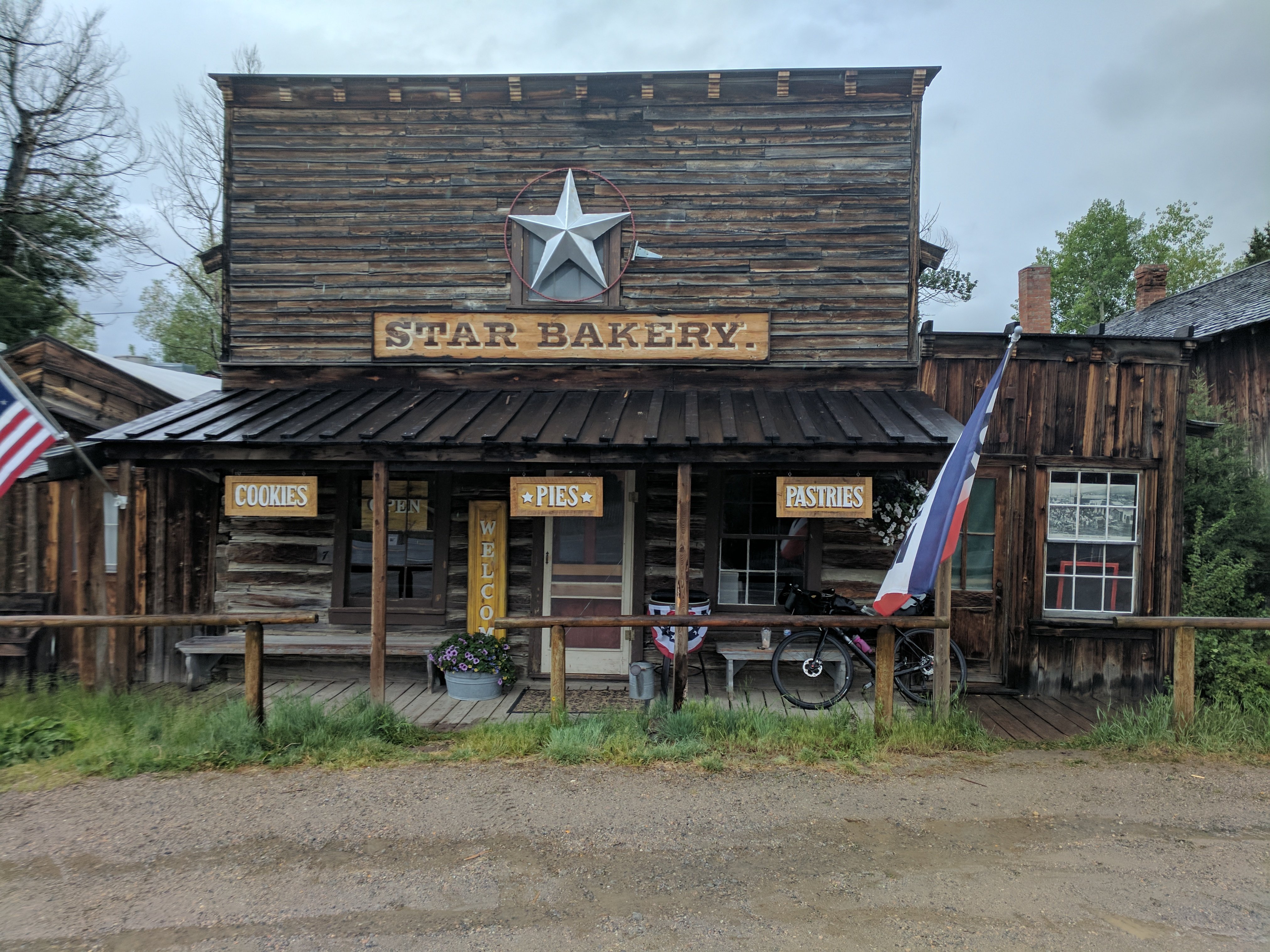 Saturday June 10, 2017: I woke up late, about 7:00 am with an Arrrrrrrgggghhh. Mind, body and soul far from rested. I took what seemed like an eternity to pack up my stuff and then sluggishly headed downstairs for the hotel breakfast hoping that caffeine and food would set me right.

The eggs looked shit….again, so I settled for a selection of brown foods and plastic cups of urine coloured apple juice and blood in urine coloured tinned style peaches…….Yes, I was also in a foul mood!

My partner from last nights ride into Dillon, Chris Owens was also in the breakfast room. My frown the perfect Ying to the Yang of his smile. I reckon it would take a lot to get Chris down. Another Chris and Trans Am racer Chris Lombardo was also there and I let the two Chris’s chat animatedly away whilst I sat with my back to them under the cloud of my own self pity. I was on the bike at 8:06 am, plenty of food in my belly but still feeling totally unenthused by the prospect of a full day on the bike. I’d spent plenty of long training rides in this kind of funk and I knew coming into the Trans Am that I would have to battle against low motivation and energy levels many times but it didn’t make it any easier at that particular moment.

What did make it simple however was the fact that I had bugger all else to do that day but ride my bloody bike.

I made good progress to the next town of Twin Bridges covering the 45 kilometres in about 90 minutes, more so due to flat terrain and a friendly tail wind than a renewed sense of vigour. In fact I still felt decidedly crap. Not the feeling of oncoming illness but just a general feeling of exhaustion which was proving hard to shake.

Thinking more calories and caffeine could be the answer I pulled up at a convenience store and cafe on the main street as Chris Owens rode on by, waving and yelling out that he would see me down the road. If only I could channel some of his effervescence. Inside, I ordered a massive coffee which was big even by American standards, a Coke and a couple of pieces of homemade cake. If that wouldn’t give me a good kick up the backside then nothing would.

I finished up and just sat there for a while trying to psych myself up.

Back on the bike and heading out of Twin Bridges it was becoming glaringly obvious that the extra calories were not the answer. My body and mind were simply feeling the effects of a week on the road. I would just have to put my head down and grind out as much forward progress as I could that day and then ensure that I got a good nights rest.

Nowhere near in the mood for company a local dotwatcher  (sorry, can’t remember his name) who was riding the other way turned around and joined me for a while. He had plenty of questions and I did my best to answer them as enthusiastically as I could but it was a real struggle. Perhaps sensing my sombre mood he peeled off after a short conversation and headed back from whence he came.

Thanks for stopping by though ole’ mate…

When it Rains it Pours

The weather was beginning to match my dark mood with a steady headwind bringing with it rain. It was the first real rain I had encountered so far on the Trans Am so I couldn’t really complain. Although of course I did at the time. I stopped by the side of the road just outside the town of Alder to put on my wet weather gear. In a panic the week before flying out to Portland before the race I had realised that I didn’t really have enough wet weather gear so I hit the Gore Bike Wear web store hard….very hard. I stocked up on all sorts of stuff; a lightweight rain jacket (very worthwhile purpose – got plenty of use), rain pants (wore once and posted home), helmet cover (ditto rain pants) and shoe covers (ripped zipper on my first wear – sent home).

Now adorned in head to toe rain gear I was transformed from a brightly coloured Mamil to what I would describe as a yellow crested road Yeti. Thus quite the sight as I entered the Star Bakery on the main street of the highly touristed old gold mining town of Nevada City. It was around 1:30 pm and I had been thinking of how a meat pie and/or a cheeky cornish pastie or 5 would really hit the spot and the sign outside the bakery lured me in. I must have been delirious because of course no such baked goods would be available in a US bakery. Although I did ask however and my disappointment must have been palpable. I thought the owner, a lovely lady was going to jump over the counter and give me a big hug, right then and there. God knows I needed one.

Anyway, I literally couldn’t make up my mind what I wanted so I settled on a chocolate milkshake which I drank out the front. My Parade Was Not The Only One Being Rained On

A couple of kilometres up the road in Nevada City’s sister town of Virginia City I stopped to take a few photos of an Irish-American parade coming through the town. It was on the steady climb out of Virginia City in the steady rain, dropping temperatures and low energy that my resolve was finally broken. You can almost see the point at which it snapped in the following photo series that I hereby name, “Fuck this I’m getting a hotel in Ennis”: “C’mon! Let’s get to the top of the hill and enjoy the descent”. “Fuck this. I’m getting a hotel in Ennis.”

With a solid crosswind the descent into Ennis was downright scary. I thought I was going to be blown off my bike a couple of times at high speed. It was also bloody cold and at one point I had to stop to put on my gloves.

I rolled into Ennis at about 3 pm.  There were tourists everywhere and immediately I grew concerned that there would be no hotel vacancies in town. I spied Chris Owens out the front of a restaurant and bar on Main Steet and chatted with him for a while before he headed inside for food and warmth. He asked me to join him but I declined. I told him that I was having a shit day and just wanted to find a hotel and crash. I sat out the front of the restaurant and rang 3 hotels. All were booked out…….Bugger!

In despair, I just got back on the bike and started aimlessly riding down Main Street. I was almost out of town when I spied the Riverside Motel and Cabins on the left. They had vacancies……Halle-freaking-lujah!

I checked in, rode back into town to pick up a whole pile of food for dinner and for the next morning’s breakfast. Once back in my room, I ran a bath, lay back and forgot about the world for a good 90 minutes. It was bloody magnificent! Incredible just to relax the mind and body.

I then ate and put a message on Facebook explaining that I had struggled that day mentally and physically and had called it quits early to rest up. I checked it a while after and was quite overwhelmed by the responses that were coming in. They brought more than a couple of tears to the eye I must admit. I was really touched by the support.

Here’s a selection of the messages of support: With the extra time I also washed my clothes in the bath and shaved my head and face, of course leaving my nicely developing Moustache well alone which I was growing as part of my Movember fundraising efforts. I even watched a little bit of TV.

I was starting to feel a shedload better. I was starting to really relax for the first time in weeks what with the frenetic build-up to the race and then 8 days of the race itself. I also had a growing sense of determination that I was going to have a massive day the next day to make up for the early finish.

As if to signal its approval of my rejuvenating optimism the weather changed for the better. The rain had stopped and the sun was coming out in a beautiful sunset. I took a photo of it out of the window of my cabin: I then got everything organised for a quick and early departure and hit the sack.