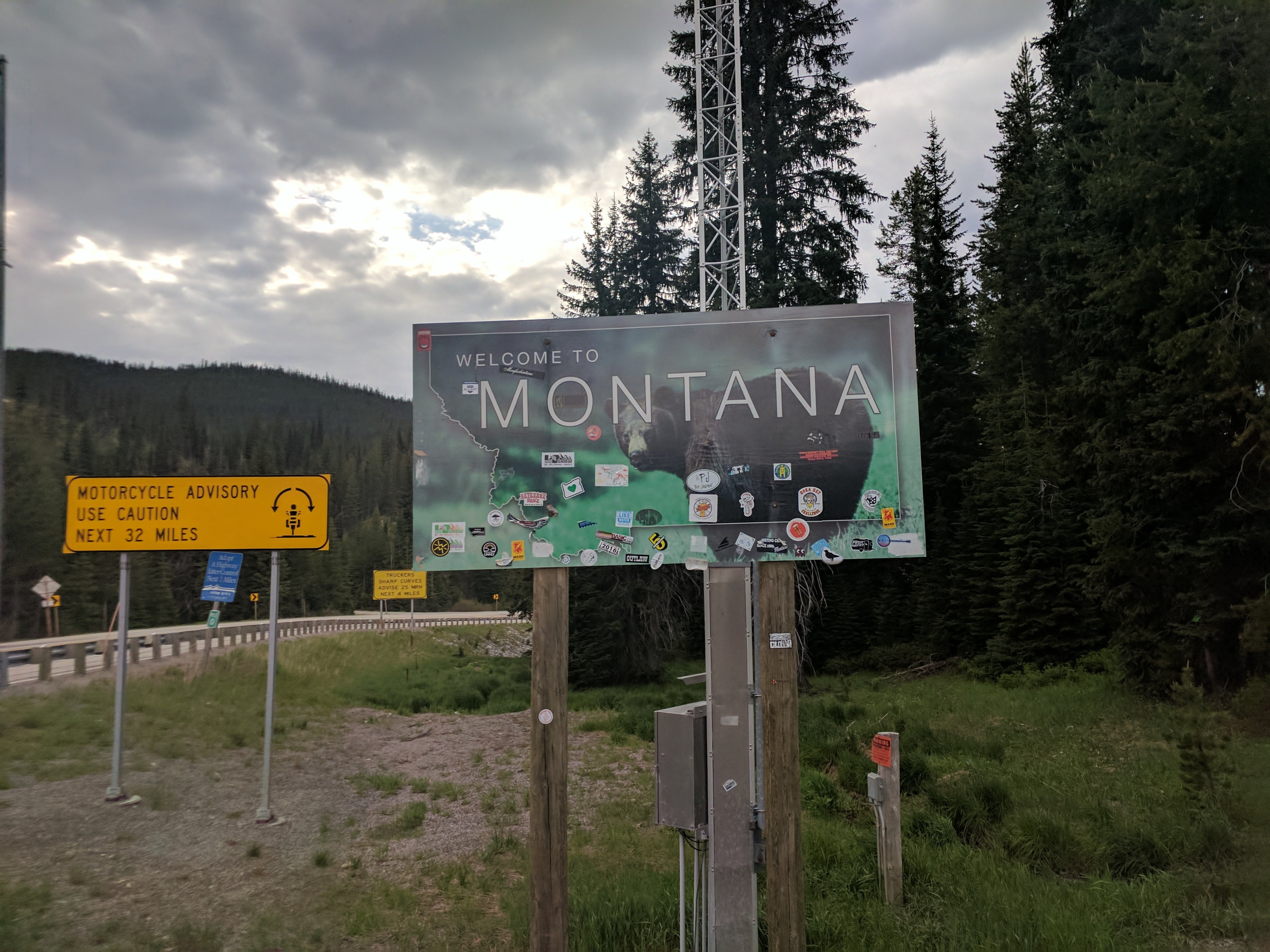 Thursday June 8, 2017: I woke up lethargic and sore on the morning of Day 6. The effort from the day before had taken its toll. Pain in my left knee which had only been a dull ache the previous 2 mornings had really started to hurt overnight and had actually woken me up a few times. There was also an ominous clicking sound emanating from the kneecap when bent at certain angles as well. Worrying yeah but absolutely nothing that would prevent another big day.

I would however take it a bit easier today. My effort would be all about consolidation rather than all out racing.

I decided not to fight my lethargy and took my time over the hotel breakfast watching CNN and briefly chatting with another Trans Am Racer John Egbers from Minnesota. He had also gotten in relatively late the night before.

When CNN turned to live coverage of the James Comey Senate Intelligence Committee hearing it was well and truly time to get the hell out of Dodge. I grabbed a couple of handfuls of breakfast pastries to munch on the bike and hit the road.

I was on the bike at 7:22 am. Literally at the moment I was engaging cleat with peddle the bleep bleep of an incoming Skype call hit me. It was my dad calling from Sydney. I was not really ready for it as I was still working out how to get back on route but it had been a few days since I had spoken with him and I was keen to hear his voice. He was the only one ballsy enough to constantly remind me of how I was tracking against my 270km per day target so I was also keen to hear how my big day yesterday was affecting my progress against that goal. No doubt he was keeping tabs in a spreadsheet. I was back up to an average of 255km per day. Another few big days and I would be back on track.

I finished up the call with Dad and headed out of Grangeville into flattish open pastoral land at a solid pace, my earlier lethargy and soreness in my knee disappearing with every peddle stroke. In no time I was in Kooskia, known as the “Gateway to the Wilderness”. Thursday June 8, 2017. Not grimacing rather an expression of determination for another solid day.

Yep, another movie reference although I was not going anywhere near as hardcore as Christopher McCandless.

I’d only been riding for just over an hour and a half by the time I arrived in Kooskia. I didn’t feel like stopping but thought I’d better heed the warning issued in big red caps on my cue sheet; “LIMITED SERVICES NEXT 200km”. Shit eh, Kooskia really is the “Gateway to the wilderness”. Better load up on calories.

I wasn’t hungry or thirsty and walked up and down the aisles of a local supermarket in a state of indecision for a while before settling on a Turkey wrap, fruit and the usual suspects of water, Coke, Gatorade and sugary snacks.

Back on the bike, out of Kooskia. Over a bridge. Right turn onto Highway 12 with the Clearwater River on my right. Into the wild I go… Thursday June 8, 2017. The Clearwater River out of Kooskia. About 4okm further down the road the Clearwater River joined with the Lochsa River and the water became noticeably rougher. In fact I have since learned that Lochsa means “rough water” in one of the many languages of the original native inhabitants, “it has salmon” in another. Furthermore, from mid-May to mid-June the Lochsa River is rated as one of the world’s best for continuous whitewater.

Thanks Wikipedia but I digress. Thursday June 8, 2017. The rough waters of the Lochsa River.

Again not really ready for a stop, the necessity of utilizing the services when available had me stopping at Ryans Wilderness Inn near Lowell. Food was not necessarily the issue, I had enough on the bike. The concern was water in the warm and humid conditions. I needed enough water to last me to the next services at Lochsa Lodge 110km up the road. I didn’t particularly feel like wetting my whistle in the river with the known risks of giardia.

Cell phone coverage had long disappeared and there was not much vehicle traffic at all. It was really starting to feel quite remote.

Highway 12 along the Lochsa River was monotonous. Spectacular scenery but it never changed and just seemed to go on and on and on…..and on. It was also quite a hard slog, an endless false flat of circa 1/2%.

I stopped by the river for a rest and to relieve the boredom.

As I lay next to my bike, eyes closed, listening to the sounds of the river I heard someone or……something approach me.

No, not a bear but a bloke with a pistol in a holster on his waist. Not a scene that I was used to or indeed was expecting. Consider my boredom suitably relieved. It turns out that he was a hunter from Portland on the trail of a 400 pound bear which he had last spotted meters from where I was lying.

Never a dull moment in the Trans America Bike Race.

Anyway, we were both starved of conversation and crapped on for a while about our respective areas of expertise. Me riding my bike, him killing stuff, before I took my leave to get back on the road. Suffice to say I wasn’t too fond of the idea of being in 400 pound bear country when the sun went down.

I topped up my water bottles from the massive water tanks in The Bear Hunter’s campervan, nervously spying a couple of large rifles and then hit the road again. Another couple of hours steady slog ever so slightly uphill with only the very occasional kayaker for temporary human company and I finally arrived at Lochsa Lodge. It was about a kilometer off route but I was out of water . If I hadn’t come across The Bear Hunter earlier and topped up my water bottles I may well have been in a spot of bother.

It was quite a sprawling complex with log cabins and a large restaurant but I settled on the country store for some water and an ice cream. It turns out Lochsa Lodge was quite a popular spot for cycle tourers to stay and I chatted with a couple of Canadians from Montreal and a couple of other American guys who were touring the Trans Am route.

This was my first real glimpse into the world of the cycle tourer. Incredibly heavy steel bikes with massive panniers. They would take 3 to 6 months to travel what would take us racers 18 days to 6 weeks. Their distance per day would be based on mood and energy levels and if they found a nice place to stay they would simply hole up for a couple of days. I was envious of their ultra relaxed attitude vs my “gotta ride, gotta ride” anxiety but I doubted my patience to string out the ride over that time frame.

I was particularly touched by one of the guys (unfortunately I can’t remember his name) who was riding the route solo in tribute to his mother who had died recently. He had dreamed of riding his bike across the US from when he first learned to ride as a kid. His mother knew this and her dying wish was for him to follow that dream.

He was living the dream.

We were all living the dream. Thursday, June 8 2017. My new mate who was riding the Trans Am route in tribute to his recently passed mother.

I pulled out of Lochsa Lodge at about 5 pm and resumed the steady climb up Lolo Pass. The gradient shifted noticeably up and after about 20km and 2 hours I was at the summit. I was also in Montana!

I have since been informed that the Lolo Pass climb was not just this last 20km section, rather it had started way back near Lowell, 130km back. It can be seen quite clearly on the following elevation chart of the days riding: The next 50km to Lolo was all downhill and only took an hour and a half but it seemed to go on and on. Monotomy was definitely a recurrent theme of the day.

I rolled into the town of Lolo at around 8 pm, more than ready to jump into a vat of fast food. As luck would have it the golden arches presented themselves when I needed them most. 2 Trans Am riders were inside; Russell Slater whom I’d met a few times over the course of the race to date and Martin Cox from the UK. I hadn’t met Martin before and didn’t quite know how to react to his “lovely to meet you but with due respect I hope I never see you again” greeting. I thought he must have been taking the race a tad too seriously at the time but over our many subsequent meetings, I’d learn that it was probably just his ironic British sense of humor at play.

Macas consumed. Time to find a hotel. An additional 253km in the bank.

Yep, below the 270km but all I wanted to do was sleep now.

Awrighty then, after quite the sabbatical I'm bac

We're not in Kansas anymore. . Snaps from today