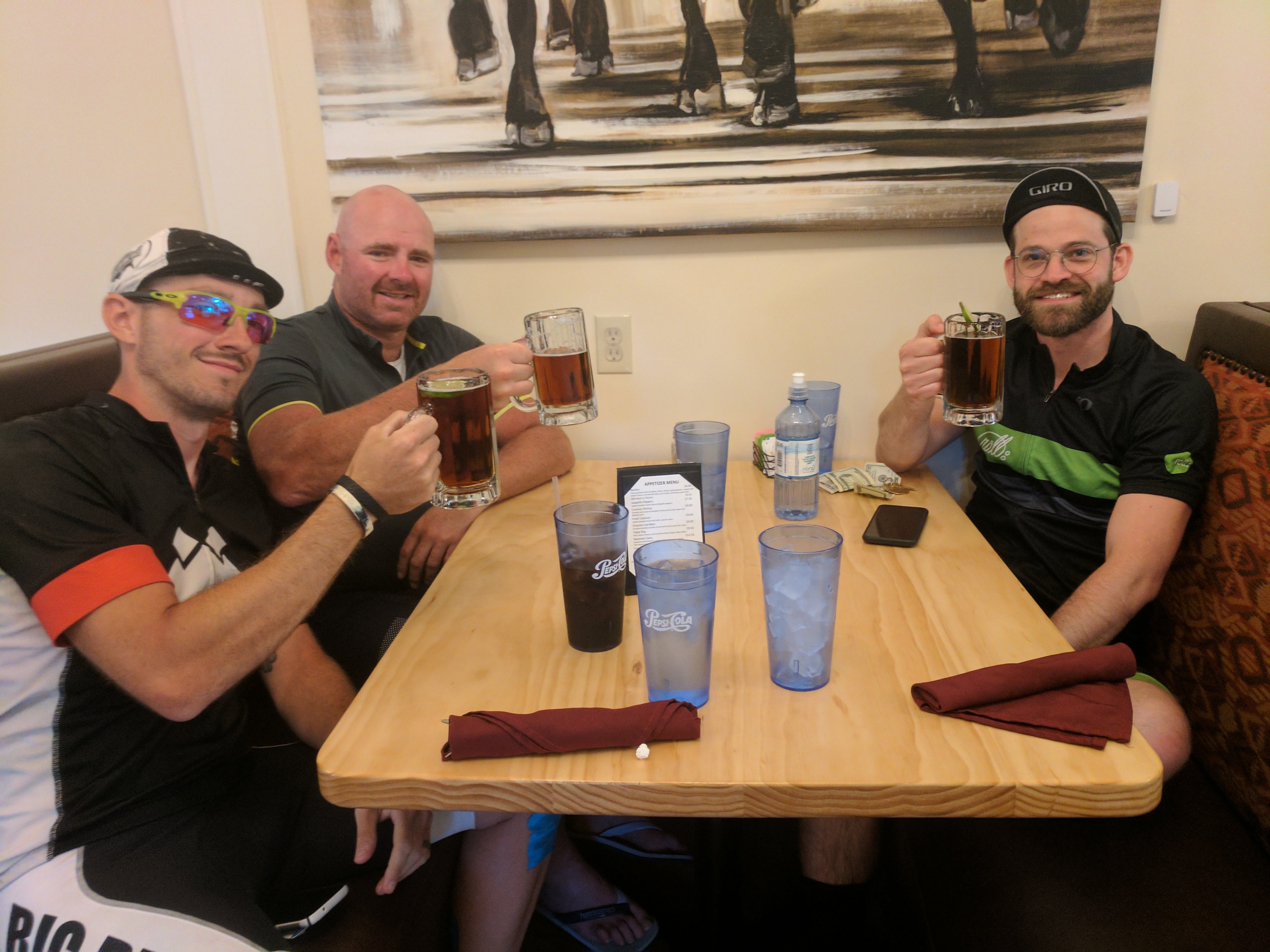 Having packed up the night before (wonders will never cease) I was out the door at about 5:30 am with the plan of grabbing some breakfast at Prairie City 20ks down the road. The hotel breakfast buffet however was open earlier than advertised so I lent my bike out the front and headed in to take advantage of the bounty on offer. I needed to fuel up. Might as well do it right then and there. Tuesday June 6, 2017. Mmmmm Breakfast. No expense spared with the paper plates and plastic cutlery. This cost-cutting effort would be evident at all subsequent hotel breakfasts across the US.

Well fed and in high spirits, I was on the road at 6:11 am. I caught up with Ben Greene from Montana as I rode out of town. We chatted briefly about our experiences to date and shared a laugh about how he would no doubt get waylaid by friends and family who were going to come out and see him on route.

Ben referenced this conversation when I next saw him 25 days later in Yorktown but I had completely forgotten about it. My memory can be pretty crap (how I am managing to put these reports together over 3 months after the fact amazes me sometimes) and it was quite embarrassing at the time.

I was feeling strong so took my leave of Ben and peddled on ready to tackle the 3 climbs that I had identified the previous night when I was planning out the day. I was keen to tick them off one by one and then crank on perhaps hitting Idaho by the end of the day. Oregon had been great but after 3+ days I was looking forward to having my progress in the race measured by States rather than just kilometers.

The first climb was a good 14km long out of Prairie City and with the scenery becoming quite spectacular I stopped briefly at a tourist rest stop to take a few photos. The snow-capped peaks on the horizon and the foothills in the foreground really reminded me of the old “Cowboy and Indian” westerns that I had seen as a kid. I half expected to see the menacing silhouette of scores of “Indians” on horseback appear over the crest of the hills making ready to swoop down and encircle me as they did the wagon trains in those movies. Tuesday June 6, 2017. The view par way up the climb looking back towards Prairie City. Tuesday June 6, 2017. A wagon from the old days suitably enhancing my “Cowboys and Indians” scene.

I called Wilson, a mate in London to wish him a happy birthday on the second climb. He was a big reason for me getting back into cycling 6 and a bit years earlier and it was great to share my experiences of the Trans Am thus far. I had actually bought him the Inspired to Ride DVD for his previous birthday with the aim of inspiring him to join me for the 2017 race but unfortunately work commitments prevented him from doing so.

These calls to friends and family really helped pass the time and soon enough I had ticked off that second climb although it was prematurely cut short by a lost cell signal my end. Nice chatting though Wilson m’boy!

On the 3rd shorter climb of about 6km I caught sight of Chris Stellato off in the distance but then lost sight when I had to stop and put my chain back on which had come off in a really clumsy gear shift which actually sounded like I had broken something. I remember remonstrating with myself to be more freaking careful in future. I was pretty much in the middle of a 100km stretch between Prairie City and Baker City with no phone reception and bugger all vehicle traffic. Not an ideal place to break down.

With the ‘3 Peaks’ under the belt the next 50k’s was an enjoyable stretch that trended downhill to Baker City.

I managed to catch up with Chris and road with him for a while. I’d seen him here and there over the last couple of days and it was nice to chat for a while and get to know each other. I’d only just met the guy but could tell he was riding a very disciplined race. He was getting around his inexperience of long distance riding (his longest training ride was 70 miles……..amazing!) by methodically spending long days in the saddle, consistently hitting the road very early in the morning.

That’s the way to do it.

After a while I rode on making good time to Baker City arriving just after 1 pm and ready to eat! Tuesday June 6, 2017. Looking back at one of the three morning climbs. Tuesday June 6, 2017. The view from a “comfort” stop looking down on Phillips Lake. Tuesday June 6, 2017. The modern day Griswalds heading the other way… Yep I was hungry all right. The jockey would be in danger once I’d eaten the horse. And it wasn’t going to be gas station food for me either. I needed a decent burger dammit!

And oh my did I find one… Tuesday June 6, 2017. The Burger to end all Burgers. T’was higher than my helmet for crying out ‘loud!

Perhaps attracted by my ample plate of food some other Trans Am racers joined me. David Horton, then Kenny Cherry and Aaron Ehlers and then a couple of other lads I don’t recall the names of.

It was here that the lesson of being efficient at stops really kicked in. David Horton rocked up a good 10 minutes after me but he left at least 15 minutes before me. He was calling for the cheque pretty much at the same time as ordering to ensure he wasn’t waiting around at the end of the meal. I mentioned this to Kenny and Aaron whom then informed me of David’s pedigree, an ultra distance running legend that had been the first person to run the entire Pacific Crest Trail in 2005. (A 4,265 km trail from Mexico to Canada through California, Oregon, and Washington. There is documentary on this amazing feat called The Runner).

He was also a 2 time Veteran of the Tour Divide . No wonder the guy was so damn efficient. I was learning from the best. Thanks David! Out of Baker City and Into The High Desert

It was starting to get hot, mid 30’s Celcius. Before rolling out of Baker City I stopped at a gas station to fill up all my water bottles, including the spare soft bottles that could be strapped to my bikes top tube before tackling the next 70km to Richland.

Chris Stellato had also taken a break in Baker City and we rolled out of town together before he rode off into the distance. The heat was starting to affect me so I was taking it steadily. Chris was keen to make progress having previously joked that he was getting sick of Oregon. Tuesday June 6, 2017. You can just about see Chris Stellato as he rides off into the distance.

At the top of the hill documented in the 2 photos above I stopped to take in the awesome scenery and take a few photos. I was awestruck by the sheer expanse of the Oregon high desert. I felt like I was riding off into the Frontier on a proper adventure. ….I need your company once again.

I’d been riding for a good 3.5 hours, was getting low on water and was really starting to feel the heat. I wasn’t struggling but I was dead keen for a break and a very cold drink or three. The next town of Richland was a good 30km away though which would take me at least another 75 minutes.

The Powder River which had been around earlier in the day then reappeared and its presence really seemed to buoy my spirits and help the miles pass easier. It had taken on a really lovely form, flowing over gently sloping landscape, meandering back and forth, creating an oasis of green in the otherwise barren countryside. It was scenery that would not have been out of place in Tolkien’s The Shire. I could almost picture Hobbit Villages nestled amongst its banks.

In no time I was in Richland. Tuesday June 6, 2017. The sun was beating down but the Powder River was back to keep me company. Idaho Can Wait, One More Night in Oregon

I was pretty dried out by the time I got to Richland and spent a while out the front of the Richland Hitching Post replenishing my fluids, eating ice cream and just generally trying to cool down.

Chris Stellato was already there, then Kenny Cherry rocked up and a good while later David Horton who had run out of water 30k’s out of town. I thought I was dry. Whilst kicking back Chris, Kenny and I made a loose plan to meet up at Halfway another 20km up the road.

I had an open mind when I rolled out of Halfway about 10 minutes after Chris. Ideally I wanted to get into Idaho that night but the 10km climb out of town put those plans to rest. I was done. Halfway would be my resting place for the night, although I almost changed my mind during the fast and incredibly scenic descent in the early evening shadows which really seemed to recharge my energy levels.

I got into Halfway and checked into a hotel just before 7:30pm. I was disappointed at another early finish. It hadn’t been the big comeback day that I was after but any disappointment was soon washed away by a beer, half a cow and great company in the form of Chris and Kenny. Tuesday June 6, 2017. The descent down into Halfway in the early evening light. Fast n’ Pretty. A good stint in the saddle today. Into Idaho = 1

Down onto the Great Plains and within sniffing dis

Alrighty then, the dust has settled and it is now