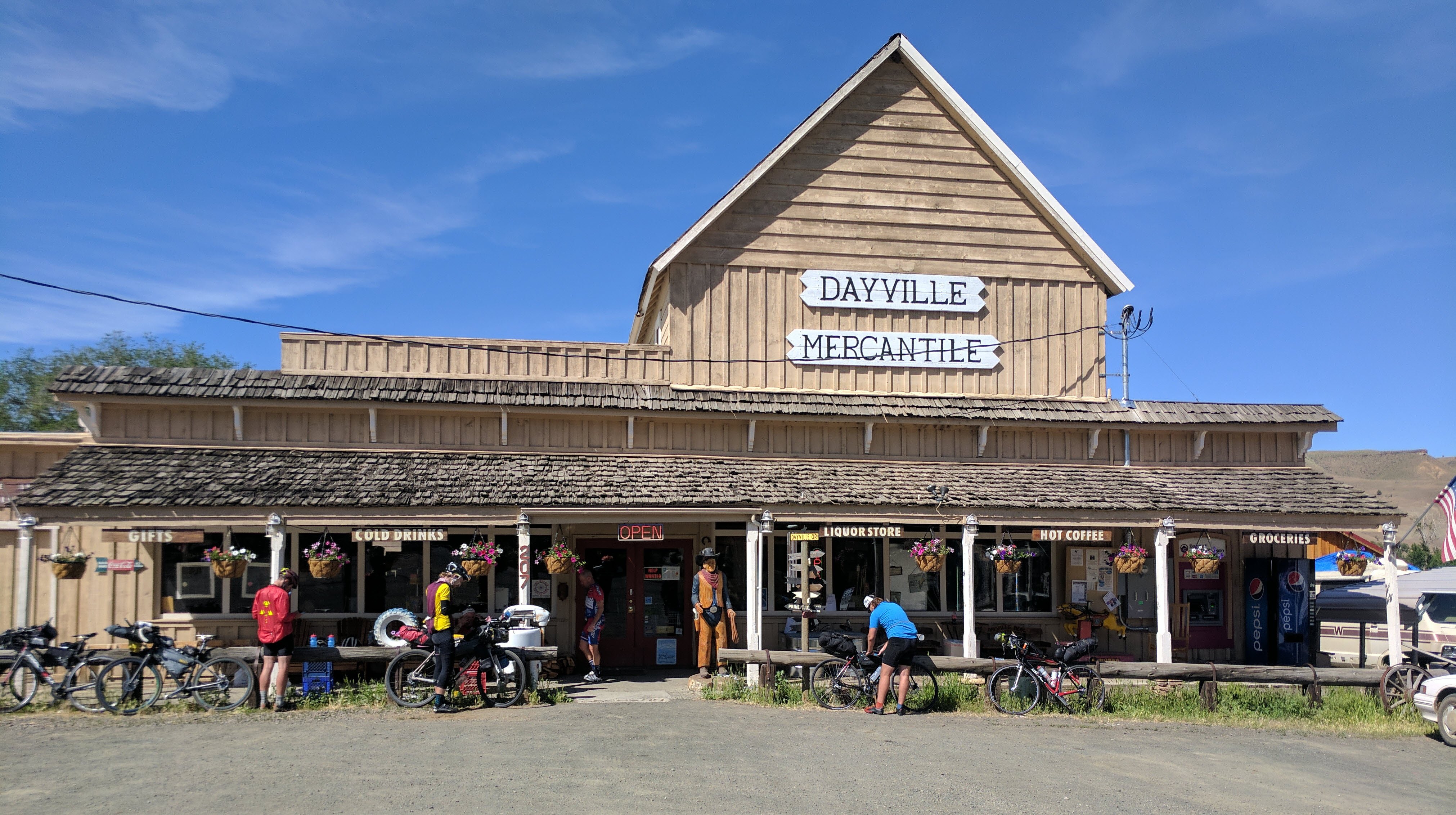 Monday June 5, 2017: I was up at 5:45am, a little later than planned but I really needed the sleep. My body definitely felt the almost 600km in the legs. Just general stiffness not the fabled knee pain that I’d heard and read about that seemed to plague long distance cyclists from around Day 3 of an ultra distance event.

Still having not learnt my lesson from the 2 previous race mornings I chose instant sleep vs packing my bags the previous night so I faced the extremely frustrating task of packing. Fiddly and mind taxing.

I however regained some semblance of initiative by making a quick decision on certain items that would no longer be coming along for the ride of a lifetime; The Adventure Cycling Association Trans Am route maps (the Garmin seemed to be working ok…..hopefully this decision wouldn’t bite me in the arse – fingers crossed), shorts and T-shirt (what the …. was I thinking), mirror (ditto what the f was I thinking), small towel, glasses cleaning fluid, spork and electrolyte tablets. Good f’ing riddance! Monday June 5, 2017. Identified items that were superfluous to need. I posted them home.

By the time I finally extracted myself from my hotel room and headed downstairs I was bang on time for the breakfast buffet which I gave a good nudge. Whilst munching away I checked my phone and read a couple of nice Whatsapp messages of encouragement from my sister and parents.

Suitably fed and encouraged I was ready for the day and ready to roll out at 7:06am. Monday June 5, 2017. Motivating WhatsApp messages from my sister and parents in Australia. (note the times have been converted back to east coast time). I rejoined The Ochoco Highway out of Prinville and headed due east into the morning sun, not that it was providing any warmth. It was a very chilly morning, just above freezing. The steady climb up into the Ochoco National Forest definitely helped warm me up though.

Did I mention the climb was also bloody long, it seemed to go on for ages. Infact it was a good 45km steady slog trending up hill until a very enjoyable decent down into the tiny little town of Mitchell. Monday June 5, 2017. The Ochoco Highway heading east out of Prineville into the morning sun. Monday June 5, 2017. I took a quick breather at a rest stop in the Ochoco National Forest.

Mitchell and the Spoke’n Hostel

Mitchell, population around 120. Otherwise a town that you’d blink and miss but home to the Spoke’n Hostel, a converted church that exists to service the hundreds of bike tourers that pass through every year. There was cold water and plenty of encouragement on offer as I rolled up at around Midday.

I filled up my water bottles, pumped up my tyres and chatted with Lochie Kavanagh who had stayed in the hostel overnight and was getting ready to start his day. He had arrived at around 2am that morning and I couldn’t help but think that I’d made the right choice staying at Prinveille rather than cranking on into the night as he’d done. It was a tough section in the bright of the morning let alone in the very cold pitch black of night.

I also shared a few words of greeting and “see ya down the road” with Chris Stellato with whom I would spend a bit of time over the next few days. I would also keep in contact with him after the race. Monday June 5, 2017. Volunteers at the Spoke’n Hostel cheering the Trans Am riders as they rolled up. I needed food so I took leave of the oasis of hospitality that was the Spoke’n Hostel and pedaled about 100m off route to a Country Store in the main street of Mitchell where I stocked up on what was becoming the habitual purchacing of sugary snacks and drinks. I kicked back on a seat outside to consume and chatted with David Horton who had rocked up just after me.

It was whilst I was kicking back savouring the pure pleasure of a double caramel Magnum that a bloke pulled up in a truck right in front of me (it is actually pictured below) and made some loud remark about me taking up the whole pavement, and then again 5 minutes later made a very similar remark as he left. He was not being aggressive and it was not something that overly bothered me or drew more than a flippant “F you” under my breathe, but it did make me think.

The Trans Am route was getting remote as we headed out into the high desert of Central to Eastern Oregon. Life was serious out here. You had to work hard to survive and here I was with my fancy bike, lycra and abundant free time, galavanting across the countryside, munching on magnums late on a Monday morning.

The word hate is way to harsh in this context but the lyrics from ‘Common People’ by Pulp come to mind:

‘Cause everybody hates a tourist,
Especially one who thinks it’s all such a laugh I’d heard about the magnificent Painted Hills which were 9 miles off route from Mitchell but they were for another time. I had spent enough time in Mitchell. Back to The Race.

The next section involved a 10km steady climb out of Prineville where I rode there or there abouts with David Horton and two Kiwi lads. They were big boys too and wouldn’t have been out of place in the second row of a rugby scrum. One of them was blowing pretty hard on the hill and the other (I’m going to have to track down their names – nice blokes) took a photo of me at the summit while we waited for his mate.

John Day must have been the man back in the day out this way – one day I’ll hit t’interweb to find out why.

It was starting to get hot and I was more than ready for a rest and food/drink stop. The Dayville Mercantile in Dayville was the perfect place. I had been riding for a good 9 hours plus breaks so it was around 3:30/4pm by the time I rolled up to the Dayville Mercantile. There were at least 10 Trans Am Racers kicking back and refueling out the front in the shade or stalking the aisles inside looking for suitable stuff to cram into their hungry and thirsty mouths.

I must say that this stop was a real highlight of the early part of the race. It was great to have a good chat with other racers and share their experiences of the first 3 days of the race, most of which had been stuck inside our respective heads due to the solitude of the event. Stephen Pope from the UK sharing his tip of stashing frozen Burritos in your back jersey pocked to then consume a few hours later when you were hungry again and they had suitably defrosted. David Barstow Robinson from Portland offering around his spare McDonalds Cheeseburgers. Chris Stellato, the Kiwis and Russell Slater from Canada who I would see a lot of over the next few weeks, were also there.

Everyone seemed really relaxed. It was far from the hustle and bustle of my first rest stop back in Pacific City on Day 1. You could tell that everyone was settling into their own rhythm. If ever there was a more appropriate context for the saying “its a marathon not a sprint” then the Trans Am was definitely it.

It wasn’t all ‘beer n’ skittles’ though. There was a racer who was having some issues with his heart. Irregular heart beat I believe. He was saying that his doctor had told him that if he had any heart related issues during the race then he should get himself to a hospital asap. We were in the middle of Oregon on the high desert for crying out loud. Where the …. was the nearest hospital?

He was unable to get phone reception so I lent him mine to make a few calls and then shook his hand and wished him all the best.

In hinsight I really regret not helping him out more. I hope all worked out ok. I can’t remember his name but if anyone knows what happened to him I’d love to know. Thanks!

If you’ve ever wanted to know how long it takes to defrost 2 frozen gas station burritos at the same time in a microwave you need to add at least another minute to the combined recommended time on the packaging.

Also, another free tip. Even if you haven’t consumed 2 half frozen burittos I would still not recommend eating a whole pack of Haribo gummys and then go ride your bike.

Why I hear you ask?

Well dear reader because said snacks and physical activity in combination will create a reaction in your gut that will have you urgently dismounting your bike whilst scrambling for some semblance of roadside cover with your bib shorts around your ankles and your dignity permanently affected.

Have a look at the following photos – there ain’t many porta pottys in da hood! Time for Some Fiber

Despite sitting a tad lighter in the saddle I only put in another 50k’s before calling it quits for the day rather early at around 7:30pm. Perhaps my need to replace the lingering emotional pain from my little roadside ‘trauma’ with Fiber and Vitamin C trumped my desire to make any further progress in the race that day.

Regardless I got some take out Subway and checked into a hotel on the main street of John Day.