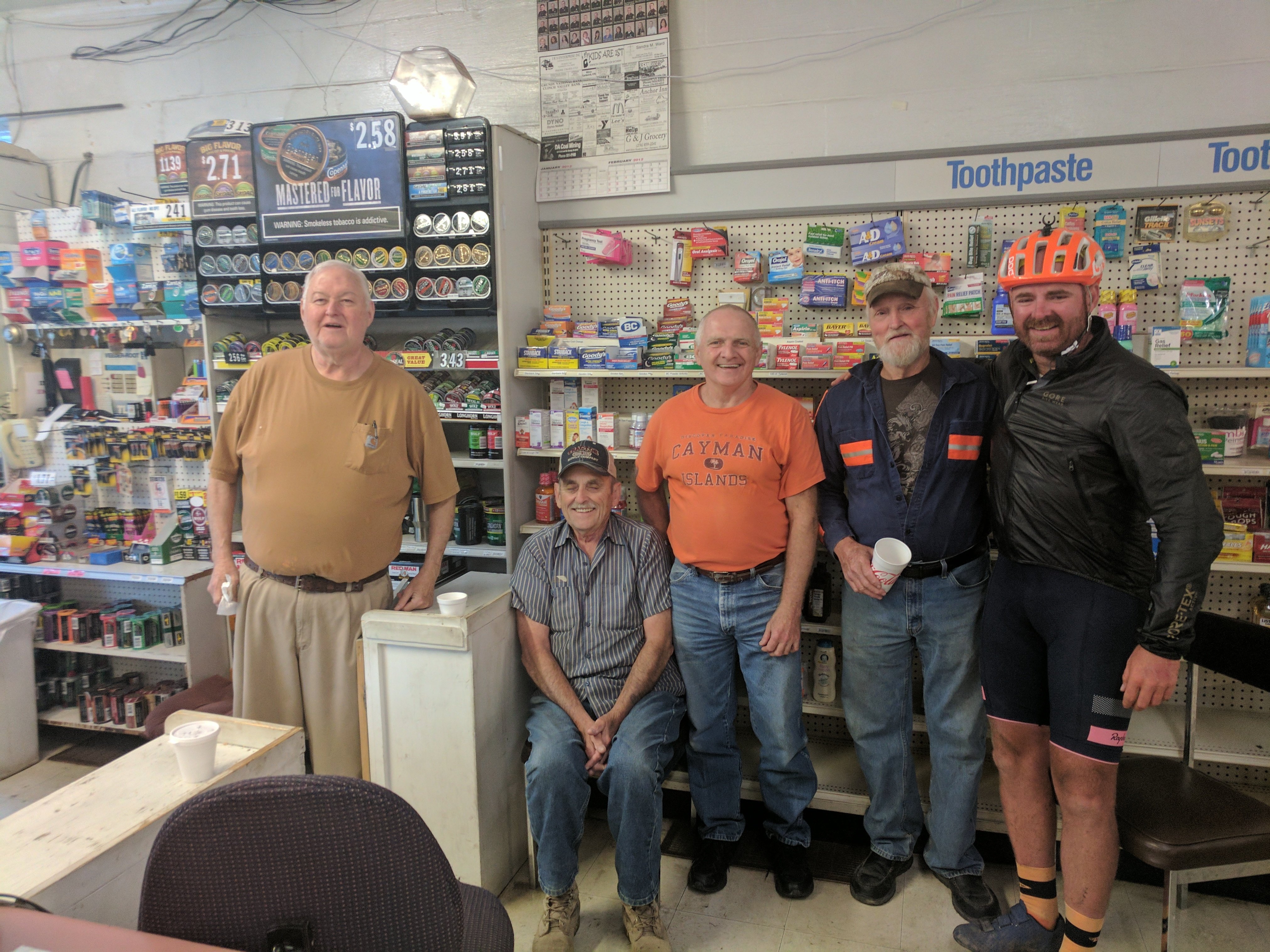 Wednesday June 28, 2017: Over a beer the previous night JJ and I had calculated the distance to the finish in Yorktown. The end of the Grand Adventure was now only 900 kilometres (560 miles) away. Shit eh, we were getting close. Despite the “wake up” call from my wife 2 days earlier and her request for an estimated finishing day, 2 hard days in the Appalachians since had knocked the concept of actually finishing back into the abstract. But now it was an undeniable short-term reality. 900 kilometres could be 3 days riding. Fact! The “holiday” was over. Time to head home and see my family.

(Never mind the fact that I had never previously put 3 x 300 kilometre days together in a row, or 2 in a row for that matter)

Another relatively early start, 5:44 am meant that Operation FOF (finish on Friday) was off to a promising start. The first 20 kilometres from Haysi trended ever so slightly up hill but JJ and I were able to ride at a leisurely pace side by side and have a good old chat. We’d gotten to know each other pretty well by this stage and we started to make some loose plans on catching up after the race. It’s bizarre how things work out. Racers had come from all over the world to participate in the Trans Am but the one that I had ended up riding with the most lived only an hours drive from me in Philadelphia. A nice little piece of serendipity.

We both needed to stock up on snacks for the bike so we stopped at the first open gas station in the town of Davenport. Despite it being before 7 am there was a bunch of good old boys hanging out near the front counter engaging in some pretty high spirited banter. There were “morning boys” expressed all ’round as we poured ourselves a coffee from the freshly brewed pot. We then settled back for a while and joined in the banter. A great bunch of blokes and we shared quite a few laughs. Probably the most raucous one being at our expenses though as they took great delight in explaining the mountains that we’d be climbing later that morning.

We chatted away for a good 45 minutes but it could have been a lot longer. It was really nice just hanging out and chewing the fat / lollygagging (I’ve always wanted to use that word in a sentence) but Operation FOF was calling my name. We said our goodbyes, took a few photos, then headed back out into the chill of the morning to tackle those hills. We didn’t have to wait long for the first solid climb of the day, ‘Virginia 80 Climb’ (3.4km @ 7% average gradient) which snapped me out of chit-chat mode and sharpened my focus on the job at hand.

I was feeling good so pushed the pace up this first lump as well as the next few. The next 40 kilometres took just over 2 hours for a grand total of 60 kilometres since setting off from Haysi 4 hours earlier. Progress was slow, unsurprisingly so with the hills but it was something I needed to be very aware of if I was to hit the planned 300 kilometres for the day. I could not do much about the hills but I could control how much time I took for breaks (ie no more lollygagging) and how fast I went on easier terrain (ie I could go faster).

Speaking of breaks, I needed one so pulled over to the side of the aptly named Mountain Road. I leant my bike up against a road sign and just stood back to catch my breath and soak up the serenity.

I was getting ready to head off when JJ rolled up, so I stayed to chat for a little while. I’ll always make time for a good old JJ chat. Besides I also wanted to check his maps to get an idea of the profile for the next couple of hundred kilometres so I could plan my energy consumption as best I could.

It turns out there was plenty of climbing to be had over the next 100 kilometres and then it was just rolling for the following 100.

Ok, back into it. I rolled into Meadowview at about midday with a massive hunger and was overjoyed to spot the golden arches in a large gas station complex that served the Interstate 81 through traffic. Conscious of my newly acquired focus on reducing downtime (not that I’d been doing that good a job of adhering to it so far that day) I wolfed down my Macas, used the restroom and picked up some snacks and water, as quickly as I could manage. Even so, that all took 45 minutes.

Although I didn’t know it at the time, that brought a majority of the days hard climbing to an end. I’d banked 155 kilometres in 10.5 hours. At that rate, a 300 kilometre day was looking very doubtful. The decent out of the mountains of the southern section of Jefferson National Forest was a most welcome change, although I’d already expended a fair bit of energy and couldn’t really take advantage of the new friendlier terrain of rolling farmland.

I was actually starting to struggle a bit and rode quite conservatively until I finally arrived at a town with services, Rural Retreat. Damn right I needed a rural retreat although on this occasion a run down looking old gas station would have to suffice. I purchased ice cream, chicken fingers, Coke and Gatorade and then clumsily made my way across the road, juggling calories and bike to a patch of shade offered by the brick wall of a derelict building. It must have been quite the scene, as a local stopped to ask if I needed any assistance….”Nah thanks mate, all good”.

As I sat back on the sidewalk to consume my “afternoon tea”, me ol’ mucker JJ rolled up. It had been over 7 hours since I had last seen him and I had been thinking that I might not see his smiling face again that day, or indeed for the rest of the race giving how close to the finish line we were getting. It was great to see him and catch up on how his day was going. We also, had a good old laugh on how tough that previous hilly section had been. I mean sometimes you just gotta laugh right?

Perhaps attracted by the frivolity of 2 sweaty cyclists on the main street of his otherwise very quiet hometown, the guy who had asked me earlier if I needed help approached us for a chat. Once he found out what we were up to he was utterly astonished at our exploits. “I couldn’t even ride 5 miles around town”, that kind of thing. He was so impressed he wanted to help us in some way, buy us food and drink, give us directions. At one point I thought he was going to offer us cash.

We chatted and laughed with our new admirer for a while but it was soon time to get back to it. But first I needed more of those chicken fingers. They were rubbery and stale but oh so tasty and at the same time no doubt assisting in getting some salt back into my system. I bought another large paper bag of them to store on the my bike as well as the customary water and snacks.

It was just after 6 pm as we made ready to leave but our exit out of Rural Retreat was rudely interrupted by an extremely long cargo train which took at least 5 minutes to rattle on past. It gave me a chance to check Trackleaders on my phone and for JJ to check his maps, though. There were about 5 dots that I had been keeping an eye on over the last few days and I was closing in on them. The first one was only 3/4 hours riding away. Wednesday June 28, 2017 (Day 26). Checking Trackleaders in Rural Retreat. Keen to get on with it and hunt down some dots. (Photo Credit: JJ Simon) The next 70 kilometres took 3.5 hours which was far from quick but a lot more spritely than earlier in the mountains. It was still tough going though, through rolling terrain with quite a few steep pitches here and there. My newly adopted superfood, chicken fingers, was kicking in nicely and I was feeling particularly strong and thus I quite enjoyed this section.

Early evening had become night. JJ and I were riding near each other and when we could we would pull up side by side for a chat. It became obvious that we had differing goals for the day. I wanted to crack on into the late night while JJ was keen to call it for the night near Newbern at some services he had spotted on his maps.

All this came to a head on the corner of Old Route 100 and Newbern Road at about 10 pm where we pulled over to finalise the plan in the pitch dark. JJ was adamant he was going to continue on a couple of kilometres off route to grab a hotel room, whilst I was racked with indecision.

Turn right onto Newbern Road and continue on into the night, or share a hotel room with JJ?

Arguments for the former: I was still 50 kilometres short of my 300 kilometre goal for the day. If I stopped then I would be running out of time to catch those 5 dots. I was feeling strong so why the f@*k not.

Arguments for the latter: I had no idea about terrain and didn’t want to get stuck in the middle of nowhere. 250 kilometres was still a respectable dent in the remaining 900 kilometres – I would just have to go extra hard over the next 2 days to achieve a Friday finish. This could well be the last night to hang out with my mate JJ. And so it was decided….I would get a hotel room with JJ.

We pedalled a couple of kilometres further up Old Route 100 to a large complex of hotels, restaurants and gas stations which no doubt serviced the nearby Interstate 81. (It was actually the second time that day that I had taken advantage of that Interstate’s infrastructure).

We sorted a room first and then headed back out to grab a meal at one of the restaurants but they were all closed. A couple of soggy pieces of take-out pizza and a warm can of beer from the gas station would have to do.