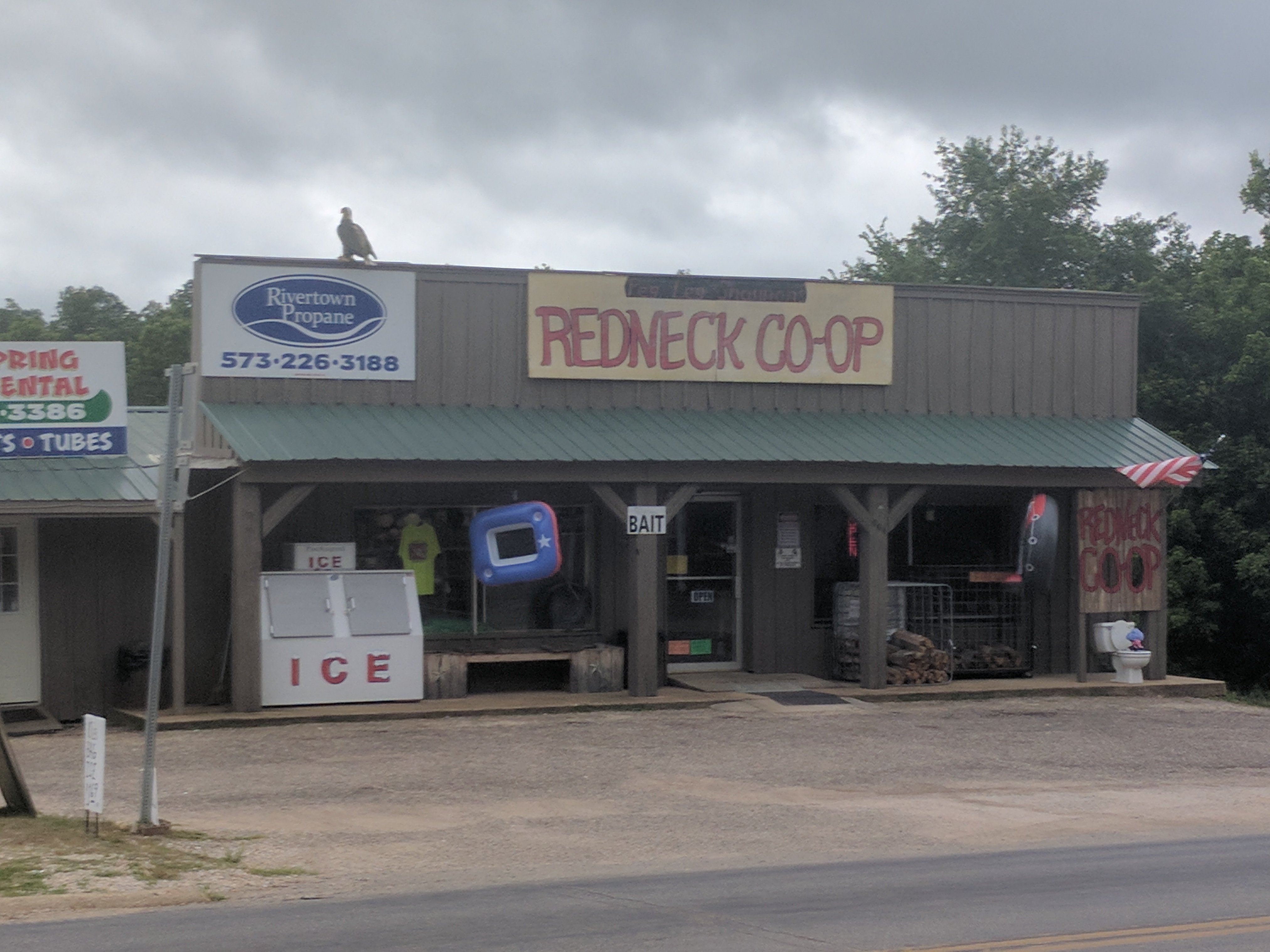 Thursday, June 22, 2017: Lethargy and body soreness were my companions on the morning of Day 20. It was the sting in the tail from my increased effort over the last 3 days over which time I had averaged 295 kilometres per day vs the 233 kilometres over the previous 17 days. It was not a totally unexpected feeling but it did mean that I had a lengthier battle with the snooze button and I was a lot slower packing up. In fact I wasn’t on the bike until 7:59 am, my latest start (not including waiting around for the bike shop to open in Lander, Wyoming) since Day 8 in Dillon, Montana where I also woke feeling like crap.

In my “fragile” condition, a big breakfast was probably a good idea but it was just too damn late. A few handfuls of trail mix and gummies would have to tide me over until I got to the next town of Summersville, 40 kilometres down the road.

As I peddled away from Houston and tackled the first few hills I was monitoring my body and energy levels closely, hoping that both would kick into gear, as can sometimes happen once you just get going. It soon became glaringly obvious however that this wasn’t going to be the case. I had nothing in the legs.

Today was going to be one of those days…..hard yards through gritted teeth.

A nice phone call with my Dad and a Mennonite buggy sighting which provided pleasant memories of training rides in the countryside outside Philadelphia put me in a decent enough headspace but my body remained in its malaise. Who Let The Dogs Out?

As I rolled into Summersville at about 9:45 am looking for fast food I was welcomed into town by a stray dog which was plodding aimlessly down the middle of the main road into town without a care in the world. It was completely oblivious to passing traffic. The occasional car would sound the horn but it wouldn’t budge from its course and the cars would have to drive around it.

Cyclists, however, were a different story. As soon as it spotted me it let out a loud bark and proceeded to chase me down the road. It got up to cruising speed well before me, so the only way I got away from the damn thing was to veer to the other side of the road and take the left turn a tad earlier than planned.

I spotted a gas station and pulled in looking back nervously as I dismounted to see if the crazy mutt was still on my case. It wasn’t thank goodness so I leant up my bike and headed inside for a bite to eat.

Suitably satiated and restocked I was back on the road within 20 minutes only to have my second canine confrontation of the morning. Not long out of Summersville I spotted 3 really mangy and aggressive looking dogs lurking on either side of the road. Their mad mate on the other side of town must have signalled ahead as it was if the bloody things were waiting for me.

As I would find out in Kentucky a few days later, an overwhelming majority of the roaming dogs I came across there were prone to chase me, but not many actually tried to consummate the encounter with an actual bite. The ones that did, found out the hard way that I wasn’t keen, via a short sharp burst of pepper spray to the face. But that’s a story for another time and alas on this occasion, I wasn’t packing heat.

So odds are these disgracefully poor representations of mans best friend were only going to chase after me for a while. But there were 3 of the bastards, thus increasing the odds of a bite. I’d read on the race Facebook page that Janie Hayes had been bitten in Kentucky which had required a cautionary hospital visit. I therefore didn’t particularly want to pedal the gauntlet until I had had a little think about the best way to approach the situation.

I pulled to the side of the road about 100 yards from my menacing mongrel oppressors.

And then all of a sudden an old pickup truck noisily sped on by, oblivious to my peril but bringing with it a bright idea. As the truck passed the dogs, they scattered from the sides of the road. These dogs were actually scared of the passing traffic. Ah ha, I had discovered their Kryptonite. All I had to do was wait for the next vehicle and somehow ride its slipstream to safety.

I didn’t have to wait long until another pickup truck appeared from around the bend. No time to think, I was off, straining like an Olympic track cyclist when pulling away from a standing start. The truck obviously sped quickly past me but I it afforded me the short window of opportunity to sprint on by the dogs, unchased, unbitten and triumphant.

Back To The Grind

The adrenaline rush was shortlived and soon enough it was back to the hard yards, grinding it out as State Highway 106 wound its way into the Ozarks proper.

The next 30 undulating kilometres to Eminence took around 1.25 hours. It was way too soon for another break but I just had to stop briefly to take a photo of the “Redneck Co-op”. Hey, wear it proudly I say although I wish they’d keep their bloody dogs under control. Or was it the Hillbillies that were responsible for the recalcitrant dogs? And indeed what is the difference between a Redneck and a Hillbilly? The real up and down of the days riding came after Eminence. Although I was feeling better than earlier in the day the rollercoaster-like roads that I had quite enjoyed yesterday were starting to piss me off.

The up-dow-up-down-up-down-up-down of yesterdays riding had been replaced by up-down-up-down-uuuuuuuup or uuuup-down-uuuuuuuuuuup. In other words the climbs were a shedload longer and steeper. Yesterday I was able to remain in the large chainring and just power over the top but some of these beasts were hitting upwards of 15% gradient and I had no other option but to utilise the small chainring as well. My chain was skipping all over the place and I was getting increasingly anxious that it would break. I made a mental note to pop into a bike shop for a new chain at the earliest opportunity. The rest of the days cycling was pretty damn monotonous. A continuation of the relentless up, down, up, down, up with the only real highlights being a couple of brief interactions with touring cyclists.

The first came about 75 kilometres from Eminence where I caught up with a guy and a girl who were  riding the Trans Am route together, west to east but they had started their adventure in their native Seattle. I was in awe of their efforts. They had set out on a whim 2 months earlier with zero training yet had built up to a daily mileage that was well in excess of the average tourer I had come across. They were also carrying a huge amount of weight on their bikes (including a gun apparently!) and in the case of the guy, their bodies. He was a big boy who despite having lost 25 pounds (11 kilograms) thus far on their tour still would have had at least another 25 pounds on me. He had a triple chainring on his bike and thus plenty of gears but the effort required to get up those Missourian hills must have been massive.

Everyday people doing amazing things in the name of adventure!

We chatted for a while and then again about an hour later in the town of Ellington where I and then they stopped for lunch.

The second interaction was extremely brief, just a shout out, “Hey mate, looking good!”, and a wave to a bloke heading in the opposite direction, but it still brought a broad smile to my face. Every time I would pass a touring cyclist like this I would wonder about the places and landscapes that they had ridden through to get to that point. Scenery that I would be riding through soon enough. I would wonder about the stories that they could tell and of the stories I, in turn, could tell them of my 20 days on the road.

We all had our various motivations for riding and/or racing our bikes across the country but without exception we were all pilgrims on a journey of self-discovery. It was about 7:30 pm when I finally rolled into the large town of Farmington. My mind was preoccupied with hunger and tiredness and I only just noticed the person waving at me, as I was upon him. The road was quite busy and I couldn’t see any place to safely stop and roll back to him, so I just rode on.

I had the opportunity to apologise for my unintended rudeness the following morning when the same dotwatcher came out to ride with me for a while. It was Wayne Linnenbringer, a lovely chap and a keen local cyclist.

Thanks for coming out Wayne!

A couple of kilometres down the road from Wayne I passed a hotel on my left. Should I or shouldn’t I? I pulled off to the side of the road and sat on some grass to think. I had banked 200 kilometres for the day but I wanted more. However, the next full service town was not for another 75 kilometres across the state line in Chester, Illinois and given how hungry and tired I was at that particular moment I chose the hotel option.

I got a room at the Inn, drank, ate and slept.