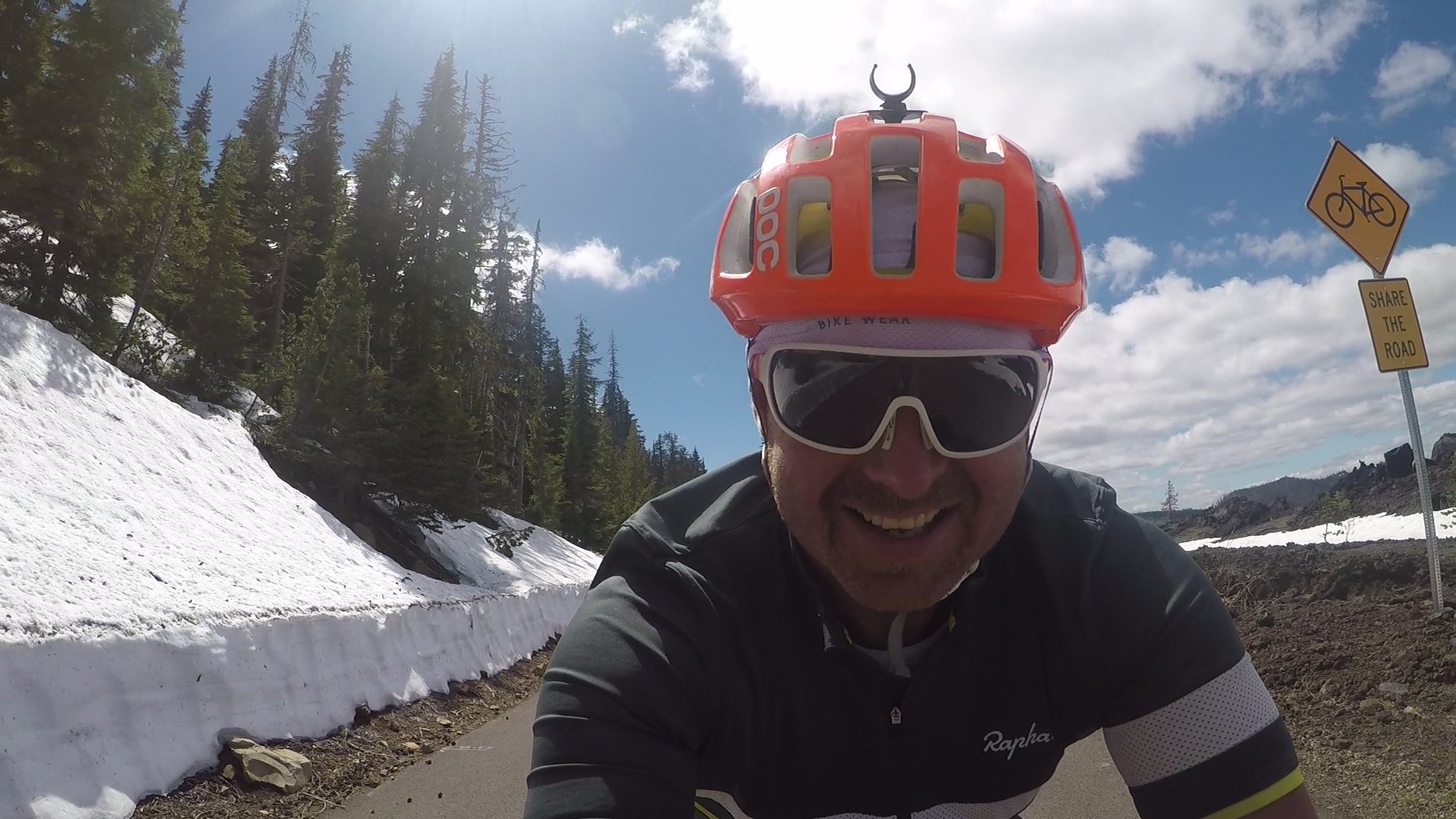 Sunday June 4, 2017: I got up about 15 minutes after my alarm went off at 4:30am, underslept and a tad stiff in the body. I instantly regretted not packing my bike packs the night before and as per yesterday it took me a lot longer than it should have to get out and about. I vowed right then and there that I would get better organised and pack up the night before. I was also thinking about stuff I could send home, having already identified that which was on the wrong side of the can I be bothered to pack vs use scale. It’s mighty tough to pack your bags when you’re still half asleep. The night before from now on is the plan.

But of course there’s always time to record the start of the day, whether inside and/or outside the hotel room: As I rolled off out of the hotel car park at 5:54am I was feeling a tad frustrated at how long it had taken me to get sorted that morning and I was tired from lack of sleep but it didn’t take me long to harden up buttercup and crack a smile. Hey, it’s pretty hard not to when you’re living your dream… Sunday June 4, 2017. Feeling a tad tired but happy to be just riding my bike.

Now For Some Breakfast

I hadn’t eaten a thing since I’d massacred my Burger King Feast at around 7:30pm the night before. I had gels and a few packets of Honey Stinger chews but I had a hunger building and a mood that needed more.

Twenty k’s in I reached the town of Coburg where I’d hoped for some American Breakfast love but it was only 7am on a Sunday and there was bugger all open. In the back of my mind was the lack of services on McKenzie Pass which I’d heard was a pretty tough climb. I did not want to be caught out. Bonking on day 2 wasn’t an option.

Onwards to the next town of Walterville another 20k’s down the road, surely there’d be a diner or something open.

En route to Walterville I got a Facebook Messenger video call from a mate in London, Scotty Fitzgerald. It was great to hear from him. The conversation took my attention away from my grumbling stomach but it also made me laugh. Scotty is one of the funniest blokes I know and could talk under wet concrete. He commenced to give me a running commentary of the race as he was seeing it on Trackleaders; “C’mon Croker you’ve got a sixty year old bloke in front of you and a chick behind you who’s catching up fast Hurry the f up!” We also talked about Aussie cricket and all sorts of crap.

Again, it was very early in the race but this contact from the ‘outside world’ was proving invaluable in keeping up morale.

Scotty would video call me 16 times and instant message me 21 times over the next 28 days. – yep, I went back and checked. I cannot thank him enough for his support. You are the man Fitzy Boy!

Long story short I missed the diner which apparently was just off route in Walterville. Øivind who I’d ridden with briefly yesterday caught up to me. We swapped stories about our previous nights. He’d slept rough and had a terrible nights sleep whereas I slept like a baby (just for not long enough) in a hotel room. He however had found the under cover diner in Walterville and had an amazing full American breakfast. We chuckled about whether you’d rather a full stomach or a comfortable nights sleep.

At that moment my preference was undoubtedly for a full stomach and as luck would have it a Country Store and Gas Station appeared out of nowhere. I’d been riding for 3.5 hours and was now very hungry. I could tell Øivind was torn between stopping also and continuing on. He stopped, hesitated briefly and headed off. We were riding together at that point but I harbored no ill feeling at all, far from it. This was not a group ride, it was the Trans America Bike Race. Every person for themselves. I would not see him for another 8 days. Sunday June 4, 2017. Close-up of my breakfast of champions; hotdog, Spaghetti-os, Pringles and Kind Bar washed down by a sugary “fruit” juice. Don’t judge me…..Needs must!

I left that seat above to Jen Colestock who rocked up as I was spilling Spaghetti-o sauce down my face and chin. What a way to make an impression. We chatted briefly and then I headed off. I would see her again later the same day near Redmond, 150km down the road.

Up, Up And Over The Cascades We Go

Out of Leaburg along the McKenzie Highway the road every so slightly trended upwards for the next 60km, with the McKenzie River never far from view whether the right or left side of the road. Sunday June 4, 2017. The McKenzie River. The sun is also starting to come out. And then all of a sudden just past McKenzie Bridge the route took a right turn off the McKenzie Highway and the circa 36km climb up McKenzie Pass began. I was really quite excited about this. The first real test of the Trans Am. Sunday June 4, 2017. Wow, it is beautiful up here! (didn’t notice the cycling friendly road sign til way after the fact….nice piece of timing) Sunday June 4, 2017. The scenery at the summit of McKenzie Pass is spectacular. The photo’s don’t do it justice. Sunday June 4, 2017. A popular spot for a snap. Got a fellow cyclist (not in the Trans Am) to take this photo for me. Apparently this section was impassable a few weeks before. Sunday June 4, 2017. Summit photo from another angle. Suns out Guns out. Sunday June 4, 2017. The descent down the other side of McKenzie Pass was fast and a shedload of fun. Took a quick selfie on the flat section just out of Sisters. You can just about make out the mountains that were now behind me to the right of my helmet.

Discretion Is The Better Part of Valor

After the debacle of the Crush the Commonwealth 2 months earlier where my rear derailleur essentially blew up thus ending my participation in that race, I went into the Trans Am with the mindset of extreme caution when it came to matters mechanical. I would subsequently be getting my bike checked out at bike shops at frequent intervals.

My bike had fallen over during one of the staged photos up on McKenzie pass and an increasing sense of paranoia was kicking in that my rear derailleur had become bent and every skipped gear on the descent was creating waves of panic.

So I tracked down a bike shop in the pretty little town of Sisters.

Now if I ever set up a bike shop (not a bad idea come to think of it) I would use Eurosports in Sisters as the blueprint. There was a bar for crying out loud in the shop! Food trucks and ample seating outside. Bloody marvellous!

It would have been rude not to endulge in the ample food and beer on offer, so I did whilst my bike was being looked over. Sunday June 4, 2017. My bike getting a good look over at Eurosports, Sisters. It turns out there was nothing wrong with my bike. The skipping gears may have indeed been due to my fromt pack restricting the movement of my gear levers so in effect I was only partial shifting. I had thus wasted a fair bit of time at Sisters but upon reflection a small price to pay for peace of mind.

Over the next 50km section to Prinveville it was becoming hotter and the landsape decidedly more arid and open. The days cycling had brought and incredible variety of scenery and conditions. From the overcast skies and green pine forests of the western side of McKenzie Pass to the cloudless open expanse of the eastern side.

Progress was definitely being made.

By the time I rolled into Prinveille it was about 7:30pm and I thought I’d call it quits for the day. I found a hotel on route at the far side of town and layed up in my room chowing down on a couple of gas station burritos. Sunday June 4, 2017. The last little section along the Ochoco Highway just before Prineville. Day 8.... Off chasing buffalo and running from be

The morning after the Day 6 before due to bugger a