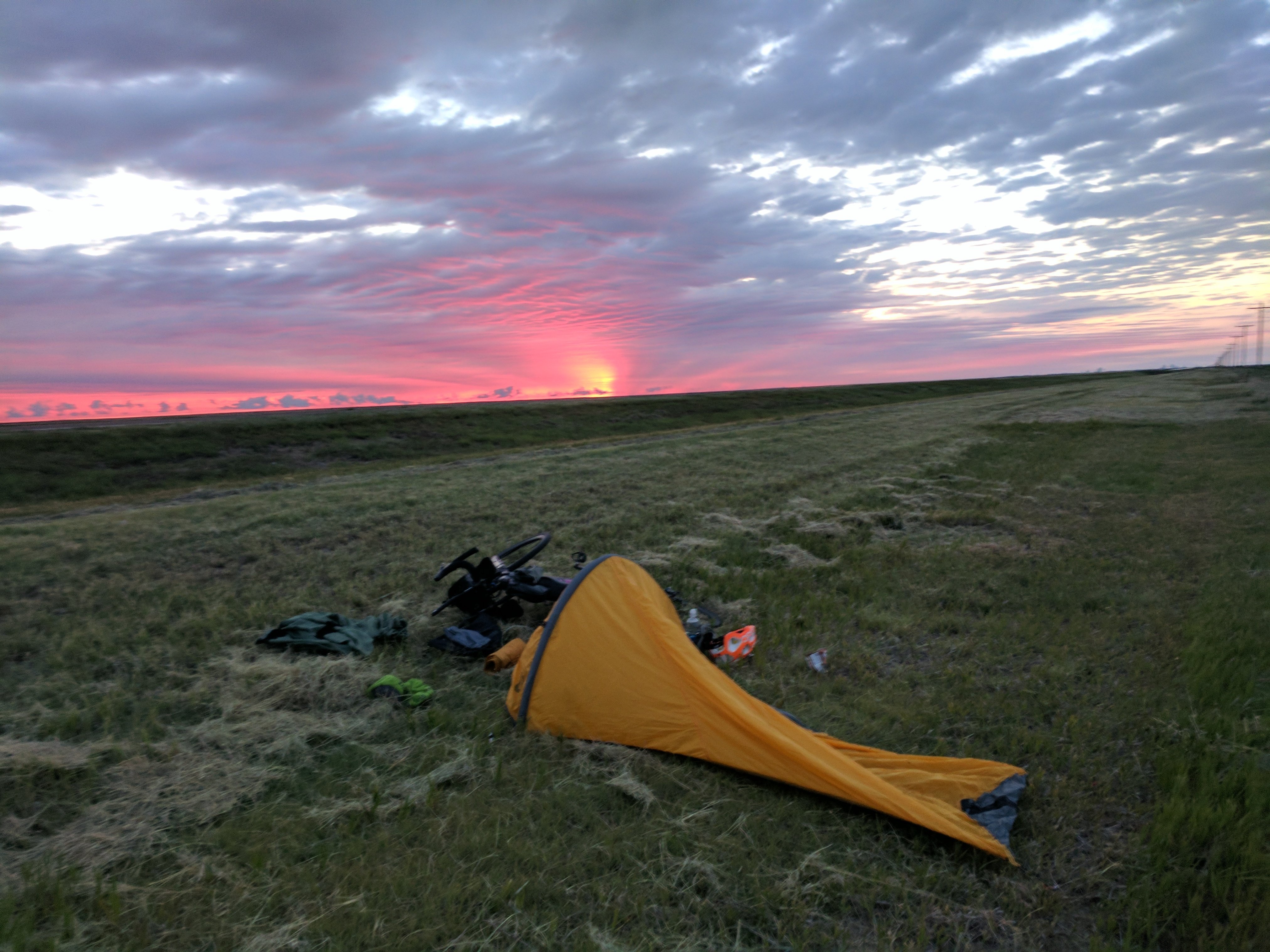 Sunday June 18, 2017 (Fathers Day): My first night in the tent was one of the best nights sleep thus far. I woke frequently due to the howling wind and general discomfort of a barely inflated mattress but the sum total of deep sleep was more than enough to repair and recharge. I reckon I would have got a good 6 solid hours. I felt great.

I was packed up in minutes noting to myself how time efficient this camping malarkey was. No hotel luxuries to get sidetracked by. I then pushed my bike up the grassy embankment to resume my association with State Highway 96. It was 5:40 am.

I was in very high spirits, singing along to tunes and whooping it up at the magnificent sunrise and the still conditions. It was going to be a good day! Too Much Chat in Tribune

30 minutes later I rolled into a gas station in Tribune for a quick breakfast, but a quick breakfast it turned out not to be. In fact, what should have been at most a 30 minute stop became a wasteful 2 hours in the blink of an eye.

Now being more introverted than an outright hunter of conversation, I was quite enjoying the solitude of the race but on that particular morning I was particularly starved of human contact. Over the last 2 days the only in-person conversation lasting longer than 2 minutes had been with 2 touring cyclists and 1 dotwatcher. I hadn’t spoken with a Trans Am racer for over 2 days.

The fact that I was well rested and excited only further fanned the flames of my need to engage in a little bit of chit chat.

1st Chat: Trans Am racers Russell Jones and Aaron Ehlers, who were both making ready to hit the road were on the receiving end of the initial verbal barrage. I hadn’t seen these guys since the morning of Day 5, in Idaho, 9 days before, so there was plenty to catch up on. Suffice to say they were delayed leaving the gas station forecourt that morning. It was damn good to see them.

2nd Chat: A father and his two sons sitting at the next table. After I regaled them of my Trans Am tales culminating in my overnight roadside sojourn, the father, in turn, took great amusement in informing me that rattlesnakes were particularly pestilent that summer in the area. Mmmm, best I found out then rather than the night before, no doubt I wouldn’t have slept so well.

3rd / 4th / 5th chat: A large group of east to west touring cyclists. A lovely bunch of blokes who were also in high spirits. Once they found out that I was “a racer”, they had an endless supply of questions for me and numerous requests for photographs. It was quite a surreal situation.

6th chat: Trans Am racer Russell Slater then arrived. He’d had a short day the day before but was making up for it with an insanely early start that morning, not that I’d call 1 am the morning, more so the middle of the bloody night. I had not seen him since Day 10, 6 days before on that awful descent from Togwotee Pass to Dubois, Wyoming. So again, plenty to catch up on.

7th chat: A Facetime with my mate Scotty. Probably the first time I have ever out chatted him.

It was when Russell informed me that he was hitting the road that I finally snapped out of my alternate reality and realised that I was meant to be in a bloody bike race. I had arrived at the gas station just after 6 am. It was now 8 am!

Stung into action, I quickly stocked up on extra snacks and water for the bike, bid the gentleman tourers a fond farewell and in a frenzy of peddle strokes headed off to catch up with Russell. About 10 kilometres out of Tribune I caught up with Russell, chatted with him for a while and then pushed on, keen to make up for the time I had squandered earlier.

The countryside was pretty much the same as the day before, flat open agricultural land, although massive cattle yards were now part of the scenery, adding a little bit of variability to the sights…..and smells.

I was making decent time covering the 75 kilometres from Tribune via Leoti to Scott City in 2.5 hours. I stopped at a gas station in Scott City to replenish my water bottles, the memory of running out the day before still loomed large in my mind.

It was whilst I was waiting in line to pay for my snacks and drinks that I overheard a conversation behind me. A lady was talking about how at Church that morning she had found out that a Trans Am cyclist had been struck by a car and killed 8 miles east of Leoti (where I had passed through a couple of hours earlier) late the previous night.

I quickly paid for my stuff so that I could rush outside to check my phone, fending off questions from the others in the queue, “Did you know him?”, “Are you in that race?” etc.

I went straight to the Trans Am Racers Facebook page and saw this: It hit me like a sucker punch to the gut…….Oh God no!

I was sitting out the front of the gas station trying to get my head around the news when Russell Slater rode by, yelling out something about stopping further down the road with a few other Trans Am Racers. I gathered myself and rode down a few blocks spotting easily where they were. 4 fully loaded bikes leaning against the wall of a Grill House is quite the hint.

Russell Slater was there obviously as were Aaron Ehlers and Russell Jones who’s ears I had bent earlier that morning in Tribune. Martin Cox, who I hadn’t seen since Wyoming 4 days before was also there.

Not many words were spoken but it was great just to be in the company of other racers to share the initial shock of the news. Even though we were not riding together and had only really seen each other a handful of times over the last 2 weeks of the race there was a tight bond between us. Sharing a big experience like the Trans America Bike Race brings people together on quite a deep level. The lads at that table in Scott City, all the other people I met on the 2017 Trans Am and indeed anyone associated with the race are welcome at my table anytime.

There is a bond between all cyclists anyway. Call it a sport, call it a pastime, call it a lifestyle but we all agree that Cycling is unique in that it affords us fitness, friendship and freedom. It is also unique in that it, particularly road cycling carries an inherent riskiness and danger. It shouldn’t bloody well have to but the sad reality is that it does. We all knew the risks coming into the Trans Am but it doesn’t make it any easier when tragedy strikes.

None of us at that table had the pleasure of knowing Eric very well but that day we lost a brother in Cycling and a soul mate in adventure and having a crack at something big. May he be Riding in Peace. At that point, it wasn’t clear as to whether the race would continue. The Indy Pac race across Australia in March was cancelled immediately after the incredibly sad passing of Mike Hall and we wondered if this would be the same for the Trans Am.

We had 2 options; stop pedalling or keep peddling. The consensus amongst the 5 of us at that moment was to keep pedalling.

But first I had to call my wife. We had discussed the risks before I had entered the race but I had to check in with her to make sure she was ok with the “keep pedalling” option. As expected she was but it was still a tough call with plenty of long silences. She couldn’t talk long as she and her parents who were visiting from Australia to help out with the boys were heading out for a Fathers Day Lunch. She said she would call me once they got there so that I could talk with the boys. It turns out that I couldn’t talk with the boys as cell reception was pretty much non existent but my wife did manage to text me a photo of her and the boys at lunch: I missed my little family a lot during the Trans Am but I never felt further away from them than during that next 90 kilometre stretch to Ness City.

What the F@*k was I doing out there selfishly pursuing my own goals and taking risks. Fair enough if I had no immediate family perhaps but I had a young family at home for crying out loud.

I made a decision to quit and started thinking about the logistics of getting home.

I had been trying to call my wife to let her know what I had decided but I had no reception. Then out of nowhere, my phone started ringing. I must have ridden into a patch of Verizon coverage. It was my coach, The CrankPunk who was skyping from Taiwan. I’d been thinking about him a lot, particularly on my strong days as it was on these days that I really felt the benefit of the training program he had put together for me.

I told him the bad news and about my plans to quit. Long story short he didn’t try and talk me out of it but he did give me a few good reasons to continue. I agreed to give it some more thought as I could see that I was perhaps letting emotion cloud my judgement. I would call the day early at the next town, Ness City and get a hotel. I could then make a decision one way t’other without it being clouded by emotion and fatigue.

Time To Think In Ness City

I rolled into Ness City at about 4 pm and got a room in the only hotel in town. I then got a ridiculous amount of Mexican food and brought it back to the room to eat, think and rest.

Over the course of that afternoon and evening I re-engaged with my Reasons for doing the Trans Am in the first place and I also read through a lot of the comments on the race Facebook page as well as from my own. They made a lot of sense.

There was no right or wrong here but I decided to continue with the race.

I got in contact with fellow racer Mike Benigni and we made a loose arrangement to ride together the next day. Sunday June 18, 2017 (Day 16). These comments on my Facebook page really helped me in deciding to continue the race.