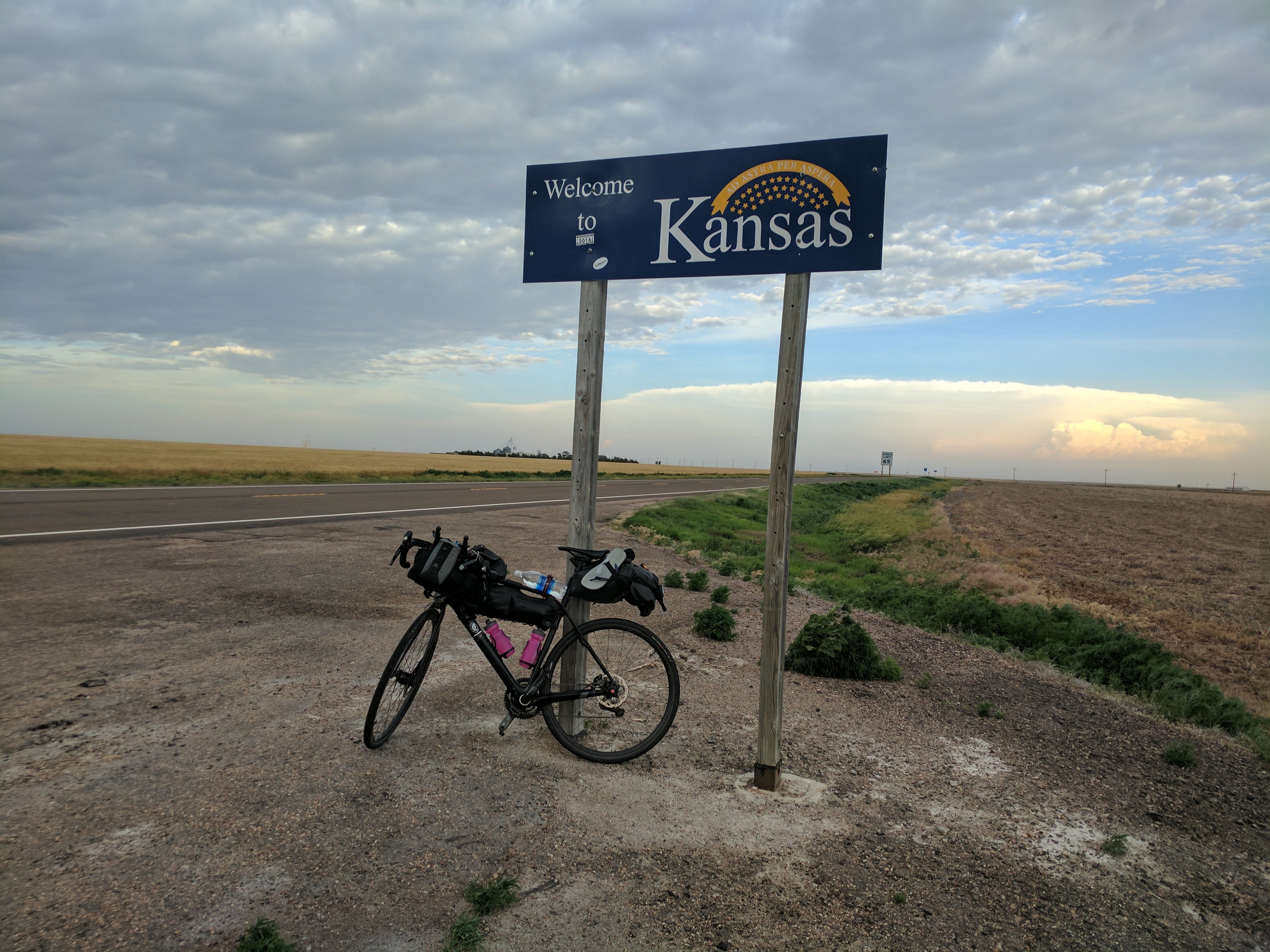 Saturday June 17, 2017: True to my plan for a relatively early start I was on the bike at 5:46 am. I felt good and was keen to get going but needed to find somewhere for a quick breakfast and some additional water to strap to the bike. There was red ink all over my cue sheet for the next few hundred kilometres indicating minimal services. I absolutely did not want to get caught short of water out on the plains as I almost did the day before on the high desert.

A couple of k’s down East 4th Street I found a gas station that just so happened to have some freshly made bean burritos on offer. I bought 3, ate 2 right then and there and stored one for the road figuring the extra “wind” assistance later in the morning would come in handy. I also bought an additional 1.75 litres of water for a total of 3 litres on the bike. Surely that would be enough!?

After a rather uninspiring 20 kilometre section on the road detritus riddled and busy US Route 50 the route then finally headed off into the countryside on State Highway 96 which unbeknownst to me at the time, would be my stoic companion, in a bland kind of way, for the next 2 days and 450 kilometres.

At the time I was very excited to be there however as evidenced by the singing fool in the photo below. The flat: Good Going For The Big Fellas

[WARNING: This section includes gratuitous self-congratulation and promotion with frequent Strava references. Should this offend please scroll to the next section]

As the plains opened out from scrubland to wide open seemingly never-ending agricultural land I put the hammer down. The conditions were perfect for the larger cyclist: still and flat.

(The bean burritos were also kicking in). I even got my first ever Strava Top 5. Yes, a tiny sample of 61 from the thousands of Trans Am racers and tourers that have come before me but I’ll claim it! The Monotony Of The Plains

I had flown into Colorado Springs from Philly a couple of years before and I can remember being really surprised looking down from cruising altitude through a clear sky at the flat open plains of Eastern Colorado. “Where are the bloody mountains?!” I had asked my wife. There is something quite incongruous about flat open plains and Colorado. In a game of word association, I would bet good money that the first word uttered by anyone in response to “Colorado” would be either “The Rockies” or “Mountains”.

So long story short I expected the wide open flat expanse of Easter Colorado but nothing prepared me for the sheer monotony of travelling through it by bike.

The best way I can explain it is via a serious of photos which were taken over the 150 kilometre stretch along State Highway 96 to Eades: The Heat: Not Such Good Going For The Big Fellas

On that stretch to Eades, my earlier spriteliness was pretty much stopped in its tracks as the heat of the day began to bite. My progress went from head down Strava “heroics” to an uncomfortable battle against running out of water.

4.5 hours and 115 kilometres into my day and the 3 litres of water I had started with was down to only a few warm mouthfuls and I was still over 60 kilometres from Eades. I’d be lying if I said that a little bit of panic wasn’t setting in but I all I could do was keep going while rationing what I had. I’d give myself just enough to wet the inside of my mouth every 10 minutes which I would countdown to on my Garmin.

As I rolled into the tiny little service-less town of Haswell I was prepared to go door knocking for water, not that there were many doors to knock on. In fact, the town looked deserted. I then spotted a touring cyclist taking shelter under a pergola in a public park. I rolled on over to him to see if I could “borrow” some water and with a knowing grin he nodded towards a really old fashioned looking water spigot sticking clumsily out of the ground. I struggled with the lever but eventually, a cool stream of delicious and satiating nectar poured forth. Yes, it was quite a moment. I drank from it for what seemed like minutes and then stuck my head under it for a totally exceptional experience.

Back in the land of the living, I had a good ole’ chat with my saviour. He was touring the Trans Am route as he was having some marital problems and was taking some time out to think.

We all had our reasons. Eades was still another 40 kilometres away and when I rolled into town about 1.5 hours later I was pretty much out of water again but I couldn’t see any services. I had expected to see a gas station or maybe even a fast food restaurant or diner but it wasn’t to be. I rode up and down the street in and out of town but saw nothing apart from a liquor store that looked rather closed.

I noticed a public park opposite that had a toilet block and a vending machine and I rolled on over to grab a couple of Cokes and to top up my bottles. Nearby was a poster with a few cyclists pictured on it which read “Half Way Across America”.

Shit eh! I knew I was getting close to that point but literally didn’t know it would occur in that humble little town at that particular moment. I kicked back with my Cokes, proposed a toast to myself and then rang my wife to tell her that I was halfway home. It was great to hear her voice and my 2 lads chirping away in the background but I couldn’t help but feel that I was still a bloody long way away. I thought back over the last 2 weeks worth of hard yards and couldn’t believe that after all of that I was still only halfway to the finish.

I had a bit of a case of glass half empty’itis.

I finished my Cokes but needed more sustenance and rode around town, eventually finding a convenience store off the main street where I stocked up. Guess Who’s Back, Back Again. The Wind is Back, Tell a Friend.

Not long out of Eades just before 4 pm, a stiff breeze from the north whipped up seemingly out of nowhere. One second the conditions were quite still, the next I was being blown off the road. It wasn’t as hardcore as those gales in Wyoming and indeed not as mean-spirited as I was being blown off the road, not onto it, but it was strong enough to cut my pace by over a half. Saturday June 17, 2017 (Day 15). This picture is attempting to demonstrate the wind blowing from the north, ie from the left, across the road. You can sort of make out the grass bending to the right.

This particular stretch of State Highway 96 was particularly straight and as the towns (not really towns as such, more so grain silos with a few outbuildings) were closer together, I could see the next “town” further up the road but it would take an eternity to get there. It was mind-numbingly frustrating.

Chivington: 15 kilometres in an hour.

Sheridan Lake: 13 kilometres in an hour.

I sheltered at a gas station (I mean the gas station, there was only one) in Sheridan Lake for about an hour and whilst at it grabbed a turkey sub for an early dinner. Keep Calm And Carry On Into Kansas

I reached the Kansas border just after 7 pm. I was really happy to have chalked off another State (5 down, 5 to go) but I was fried. Excluding stops, the first 180 kilometres that day had taken me 6.5 hours, the next 65 kilometres to the border had taken over 4 hours.

I may well have been fried but my frustration was dissipating. I was learning a valuable lesson. I simply had no other option but to just accept my circumstances and get on with it. Might as well do it as painlessly as possible with a calm mind rather than a frustrated one. I battled on for another hour but I’d had enough. I could see the lights of the next town but I had no way I really knowing how long it would take to get there. The wind was becoming quite ferocious. I also didn’t know whether there would be anywhere to stay once I eventually did get there and as I’d attempted to pitch my tent only once before in my backyard in Philly months before, I didn’t particularly fancy my second attempt being in the pitch darkness of a blustery Kansan plain.

So in the semi-darkness of a blustery Kansan plain, I found a spot in a ditch by the side of the road and pitched my tent. It was more than a little bit tricky in the wind but I got it done. At one point my sleeping sheet (I didn’t pack a sleeping bag – probably an error of judgement in hindsight) blew away but luckily wrapped itself around a telegraph pole and I was able to retrieve it.

It took a series of reverse army crawl and body worm dance moves to get myself and all my gear inside the tiny sarcophagus-like tent but once horizontal on a semi-inflated mattress I was extremely satisfied. I was far from comfortable but all I cared about at that particular moment was being out of the wind.

I reckon old Abe Maslow was onto something back in the 1940’s with his hierarchy of needs. Shelter is pretty damn key!

Anyway, I called my wife to tell her all was ok and promptly fell asleep.