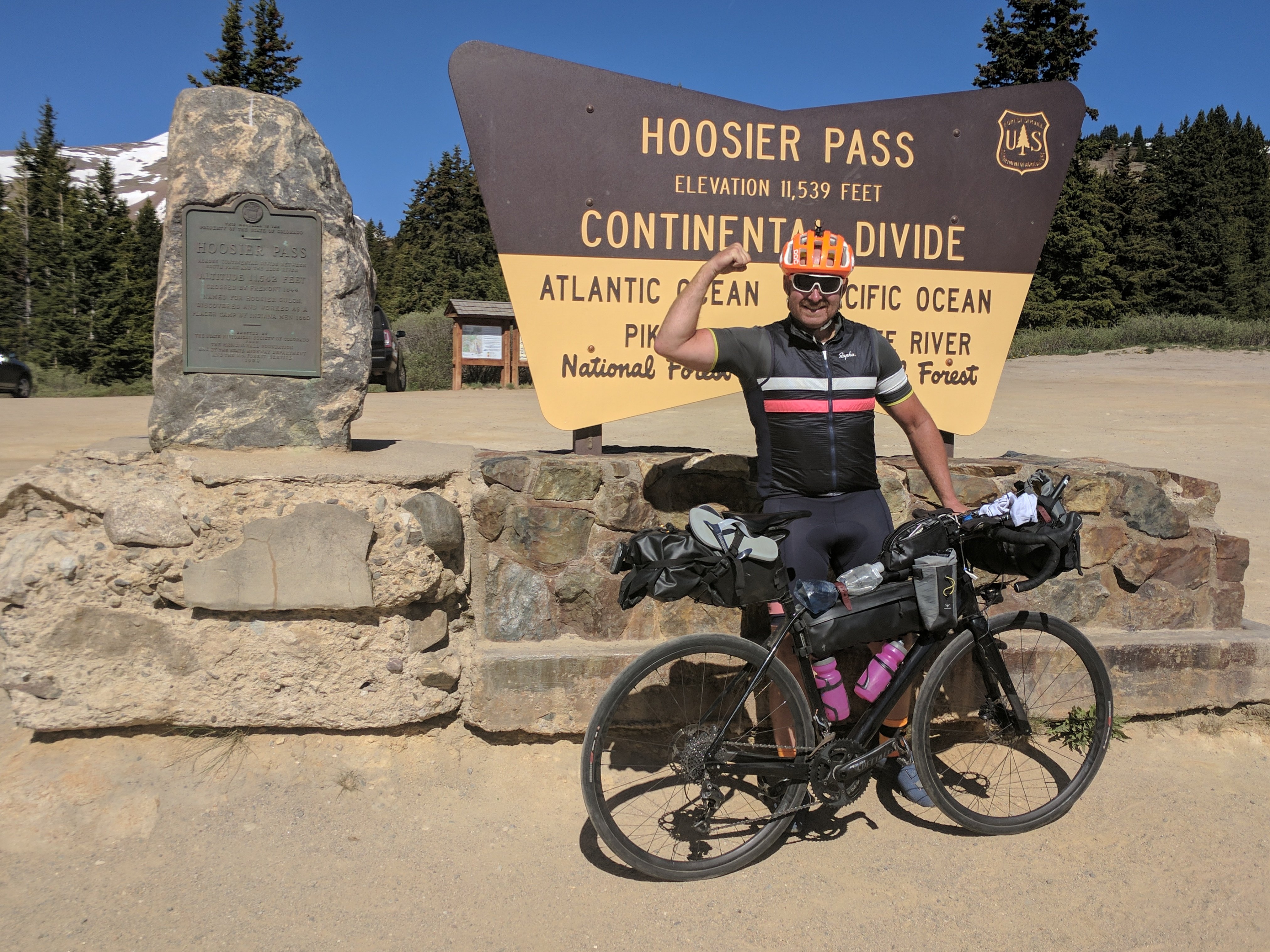 Friday June 16, 2017: I was up before 6 am feeling a lot more spritely than I had yesterday morning. Mind also in gear and excited about getting over Hoosier Pass and smashing the “downhill” section into Eastern Colorado. Speaking of smashing I did similar to a few leftover slices of pizza and with a smile on my tomato sauce splattered face headed out into the crisp mountain air. What a beautiful day!

I was on the bike at 6:22 am and proceeded to get lost in the back streets of Frisco. I was on form, my Garmin not so much and between us “we” just couldn’t find the bloody bike path to Breckenridge. Thank goodness for a local paddleboarder who was riding his bike with paddleboard strapped to it down to the reservoir for an early Friday morning paddle (outdoor sports action everywhere – I loved that place!), who was only too keen to set me right.

I came across JJ on the bike path and together again we rode on up to Breckenridge. He headed off to try and find a pharmacy to tend to a rather nasty cough that he’d been dealing with and I headed to a cafe on Main Street as I was in dire need of a good coffee and a bathroom. The fresh mountain air in combination with hastily consumed left offer pizza and uphill cycling was definitely fast-tracking the old digestion. Hoosier Pass, at 3, 517 metres (11,539 feet) is the highest point of the Trans Am but a relatively easy and gentle 16 kilometre climb from Breckenridge which itself is at around 3,000 metres elevation.

I was really enjoying it, putting in just enough effort to warm me up whilst still able to take in the scenery. Before the Trans Am I considered myself a bona fide beach lad but this adventure was definitely tipping the balance in favour of the mountains.

My mate Scotty rang me. His calls had settled into a one every 2 day rhythm and had begun to involve a common mate and work colleague of his Tom. I used to ride with Tom in London before he got into the silliness of ultra running. I looked forward to these calls, great banter that helped take my mind off the monotony of peddling my bike. The banter more often that not would be quite one-way traffic however, Scotty and Tom cracking jokes and paying piss out of me Statler and Waldorf (ref The Muppets) style whilst I would counter with grunts, foul language and gasps for breath. On this particular call I was able to contribute a little more than the usual though, a Moose and its calf sighting just off the road to my right in the tree line. As we were Facetiming I wrenched my phone from my handlebars and gave the 2 comedians in their London office quite the front row seat.

A little while later I was at the summit of Hoosier Pass and felt quite ecstatic. I was still not even halfway to the finish but the highest point on the route still represented an important milestone of the race for me – the end of the big mountains and the start of the flat plains of Eastern Colorado and Kansas. I wondered what this next stage of the race would bring.

Whilst indulging in the obligatory photo opportunities I met a touring cyclist, Jeffrey, a retired ex Kodak employee from upstate New York who was riding the Trans Am route with his wife Jai. He was riding the route and was being ably supported in a well kitted out campervan by Jai. We chatted and swapped stories. Lovely people who were also living the dream. OK, Time to Have a Crack

Granted most of that 34 k’s was up a mountain but I’d burnt over an hour by stopping for coffee in Breckenridge and carrying on at the summit of Hoosier Pass. It was well and truly time to switch back on and put down the hammer. I bid fond farewells to Jeffrey and Jai and hit the road.

It’s all Downhill From Hoosier Pass…….or is it?

The route profile indicates a substantial drop off from Hoosier Pass for the next 500 odd miles (800 kilometres) and it was with this shape in mind that I hurtled off down the mountain.

I flew through Alma and then stopped briefly at Fairplay for water and snacks. Then onto State Highway 9 cruising with a generous tailwind the 30 kilometres to Hartsell which took under an hour.

There where then a few sizeable lumps over the next 75 odd kilometres which were far from what I expected but they were interspersed by some gloriously fast downhill stretches into the valley that had me whooping and hollering like a lunatic. Not steep downhill when all you can do is hold on, rather I am talking about an average -2/3% where you can grind a heavy gear in the drops and really earn that 60 km/hr plus velocity.

I had covered the 125 kilometres from the summit of Hoosier Pass to the turnoff onto US Route 50 towards Cañon City in 4 hours, which included 1 stop. It was the fastest 100 kilometres Plus section of my whole Trans Am ably assisted by some downhill stretches but in answer to the earlier posed question, it is far from being all downhill from Hoosier Pass. Friday June 16, 2017 (Day 14). Looking back towards the recently descended Rockies on State Highway 9. I was keeping an eye out for John Richardson on the 15 kilometre stretch into Cañon City. I had just come across a touring cyclist, a really nice bloke who had mentioned that John had damaged his rear derailleur and was going to limp single speed into town and find a bike shop. I chuckled at the fact that this type of issue with my bike would be a massive inconvenience yet for John it would’ve probably been nothing short of a quick n’ dirty Macgyver-esque tinker and he would be rolling again.

I rolled into town and found a diner that was part of a large and extremely busy Gas Station. Plenty of tourists about for the many activities on offer; whitewater rafting on the Arkansas River, rock climbing and fossil museums. Fossils made me think of my 2 boys who at 5 and 2 are into dinosaurs big time. I was missing them terribly and was trying not to think too much about it. The close proximity to fossil museums that they would’ve loved and the fact that it was Fathers Day that coming weekend didn’t help.

I found a booth and ordered a massive bowl of spaghetti and meatballs and a few sides. It was obvious that I had not drunk enough water on the bike so far that day as I had a thirst that was barely quenched by 5 Coke Refills and a few waters which kept my friendly waitress well and truly on her toes. She definitely earned her tip. I also barely touched my mountain of food, a further possible indication of a flirtation with dehydration. Speaking of my friendly server I got her to fill up my water bottles with iced water, paid my cheque and then walked outside ready to hit the road. I then promptly walked back inside to buy some more water to strap to the bike. It was really bloody hot and I’d only just realized from a quick check of my cue sheet that there were no services for the next 80 kilometres to Pueblo.

It turns out I needed every last drop. The stretch out of the suburbs of Cañon City and the nearby town of Florence was pleasant enough, flattish and trending downhill but the next 20 kilometre false flat due south on State Highway 67 was tough and into a pesky headwind. The hot dry conditions in combination with the extra effort required meant that I was getting through my water stocks a lot quicker than I would have liked.  In fact when I stopped for a quick break at the end of a long driveway and one of the residents drove past, and then stopped to say hello and/or to find out what I was doing loitering near her letterbox, I almost asked her if I could top up my water bottles at her house. I wasn’t that desperate just yet though. I rationed my water for the next 45 kilometres to Pueblo through some pretty arid high desert terrain, keeping an eager eye on the oasis-like Pueblo Reservoir off in the distance. A mountain lion sighting also kept me on my toes.

Out of the high desert and into the green suburbs of Pueblo. It was quite the contradiction and I was only just getting my head around it when some bloke seemingly out of nowhere started cheering “Go Mark! Go Mark!”.

It was Mike Grace, a Trans Am Dotwatcher.

Mike was the first dotwatcher I had come across since Twin Bridges, Montana, over 5 days and 1,300 kilometres ago. No wonder I was a tad surprised. Anyway, it was really great to meet him and chat Trans Am for a while. He had plenty of passion for the race, a little more than me at that exact moment in time. I obviously looked pretty dried out as he warned me about getting dehydrated in the high desert climate, a malady that could sneak up on you and strike pretty quickly. Not fun.

I really enjoyed my short time with Mike and after receiving a few tips vis a vis hotels and places for food in his hometown I headed off. He rode with me for a few blocks before peeling off on his well optioned Surly. My original plan for the day, particularly after I had made such good time from Hoosier Pass to Cañon City was to push for Ordway which was still 70 kilometres away but I just couldn’t face it at that moment.

This mindset is a perfect example of that which differentiates a top 20 Trans Am racer with that of a mid-pack racer. A top 20 racer would have rested in Pueblo for a while, rehydrated and then cracked on into the night. They probably would have started earlier too.

Oh well, I was not a top 20 Trans Am racer, I was a proud mid-pack MAMIL damn it! Off to find a hotel.

I took a room at the first hotel I came to on route. It was too expensive but I couldn’t be arsed shopping around.

I ordered some food from the bar, took it to my room, ate, washed my clothes in the shower, sorted my stuff for an early getaway the next morning, then hit the sack.