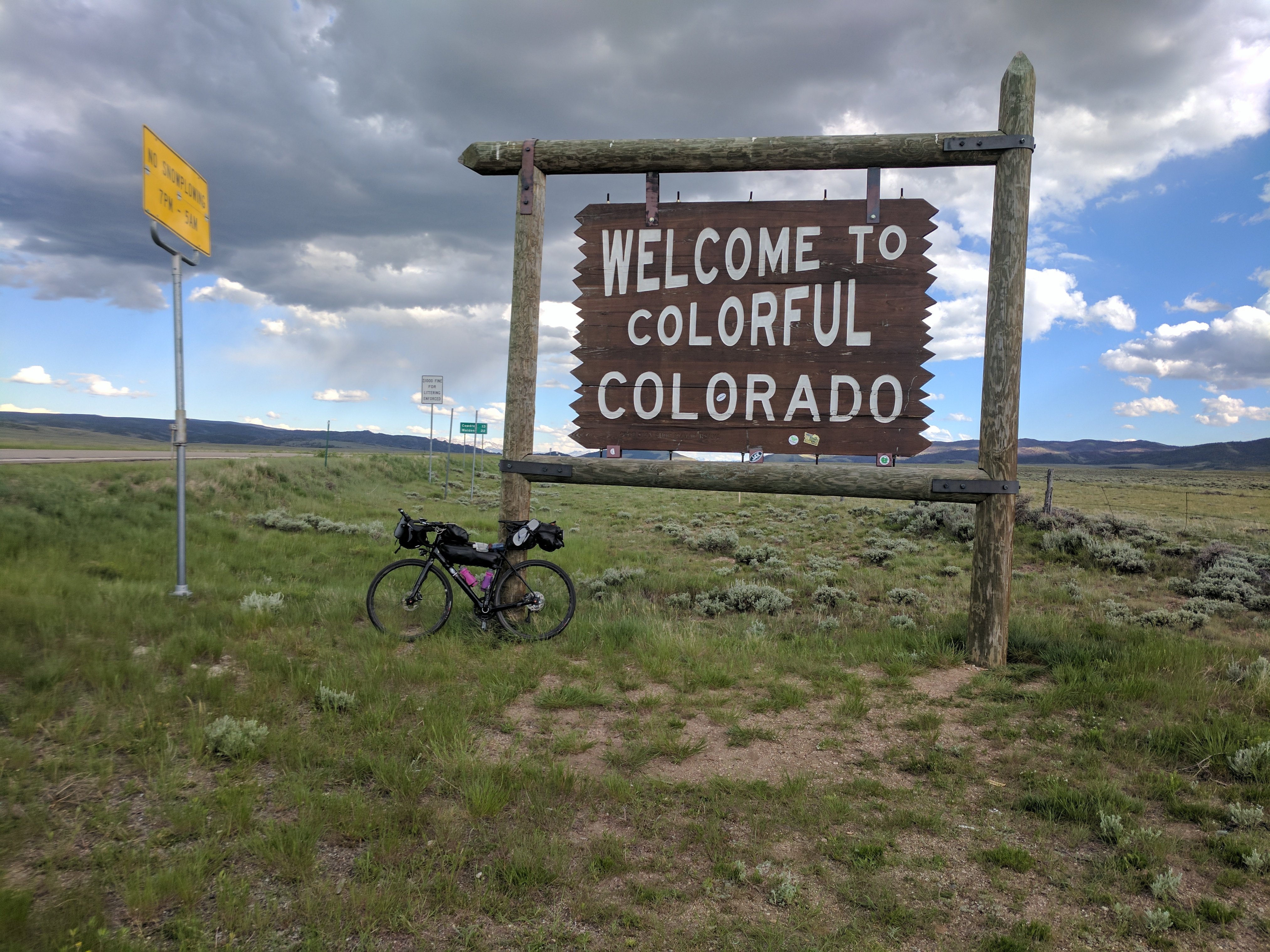 Wednesday June 14, 2017: I reckon it must have been my fanatical desire to get the hell out of Wyoming that forced me up out of “bed” at 3 am to the duelling alarms of my and JJ’s phones. Arrrrrgh! That and the fact that my daily distance output had fallen off a cliff from 288 to 195 to 131 kilometres over the last 3 days. Out of my control to a certain extent yes but what I could control right then and there was to get my fat arse up and on my bike. No room for any excuses. I simply had to put in a massive day.

I felt sluggish, very much underslept. I had been horizontal for about 5 hours but would have only slept for around half of that at best due to being woken up consistently by the howling wind and the cold. If I hadn’t borrowed JJ’s quilt I wouldn’t have slept at all. First night sleeping rough and there were already inadequacies in my sleeping system although to be fair I hadn’t planned on camping out until after the Rockies.

JJ and I were on the road at 3:43 am. The wind had reduced in intensity from the previous evening but was still blowing hard from the south and as US Route 287 was now heading pretty much due south towards Rawlins the resultant block headwind made the going tough and painfully slow.

The first 2 hours were a real physical and mental battle. I just couldn’t relax into a steady rhythm and kept fidgeting on the bike. I was also fixating on the distance and speed metrics on my Garmin which only added to a sense of deep frustration. I was also out of food which was also playing on my mind.

I just wanted to get to Rawlins but would I ever get there?

The judges were definitely out deliberating on that until the sun came up. There really is a sense of hope that comes with a sunrise and this particular one breathed life into my failing optimism. Of course I’d get to Rawlins, what a stupid freaking question. It might take a while but I WILL get there!

I stopped by the side of the road to take in the beauty of that sunrise. The sunrise and the short break definitely reframed my mindset. Even though I’d only ridden 28 kilometres in that first 2 hours I was less frustrated and more determined now. Just to make sure I didn’t slip back into frustration though I flipped Garmin screens from speed and distance metrics to the elevation line which I had never paid any attention to before. Focusing on my dot moving up and down a line on a tiny screen had quite the meditative effect…..Go figure, the mind really does work in mysterious ways.

This yogi like focus on the elevation line and a phone call from my mate Scotty really helped pass the next 2.5 hours. The 73 kilometres from the shed, Three Forks had taken 4.5 hours. In hindsight probably the toughest 70 kilometre stretch of my whole Trans Am.

I made my way to the nearest fast food restaurant which was a Burger King, ordered a feast and then kicked back to consume and recharge. Recharge myself (body and soul) and all my electronics which I hadn’t been able to do the previous night. I chatted with a couple who were moving their daughter across country from Nashville to Seattle. They had found it so windy driving the previous night that they had actually pulled off to the side of the road and had slept in the back of their pickup truck! They were incredulous that I was out there battling away crossing the country on a bicycle.

JJ joined me not long later and we shared a good chuckle recounting our experiences of the previous day and that morning. I ordered some more food and kicked back with him for a while before becoming conscious of the fact that I was beginning to waste time. I had been in the Burger King for over 1.5 hours! I had that end of an ordeal feeling rather than that, I have over 4,000 kilometres still to race feeling.

I needed to refocus.

Stung into action, I got the really friendly manger to wash out my water bottles which had become rather mould infested, packed up and then rolled out with JJ. He hit the road and I headed to the nearby gas station to stock up on snacks for on the bike and for the next part of the Grand Adventure. Wednesday June 14, 2017. Stocked up on snacks for the next part of the adventure.

By the time I was back on the road it was 10:15 am and I had been off the road for 2 hours. Not the amount of time I would want to make a habit of for my rest stops but on this particular morning, I needed it.

It was still breezy out but so much more bearable than the previous few days. A mate from Philly, Frank then called. It was the first of a few calls he would make over the Trans Am and it was really good to hear from him. He’s a real fan of a road trip and knows parts of Wyoming quite well so he didn’t need any convincing of the windy hell hole that the state can be.

Not long out of Rawlins the route follows Interstate 80 for about 20 kilometres. A necessary evil perhaps but it was far from a relaxing stretch – bikes are just not mean to be on Interstates. A little more relaxing was the next 30 odd kilometres through pastureland south on State Highway 130 towards Saratoga. It was on this section that I caught up with John Richardson…..again. Not that I was keeping score but it was about the 3rd or 4th time that I had passed John so far in the race and it wouldn’t be the last. It was indicative of our very different approaches to the race. I would pass him on the road and he would pass me whilst I was sleeping.

We chatted for a while and swapped war stories from the last few days in the wind. It turns out that John had been caught out on the section from Three Forks to Rawlins the previous night and had been forced to bivvy out in the gale. “Bloody Hell!” I thought. His story only further reinforcing my belief that John was the hardest person in the race, or worst case the hardest of us mid-packers.

I was keen to continue the conversation and told John I would meet him for lunch at Saratoga. “I’ll keep an eye out for your bike” he’d said. Wednesday June 14, 2017. A random photo I took of a Gun and Taxidermy store I took on the outskirts of Saratoga.

The 70 kilometres from Rawlins took me just over 2.5 hours, 2 hours faster than the first 70 kilometres of the day. Still not quick but steady.

Even though I was not really hungry I stopped for a spot of lunch as I just needed a break and indeed was quite low on energy. I pulled up at the first gas station I came to and leant my bike in a prominent spot for John to see although by the time I came back out with an armful of brown food it had blown over, skittles and gummies strewn all over the gas station forecourt. A seemingly innocuous incident but one that could put my progress in the Trans Am on hold for quite a while. Gummies are only a gas station away but a broken rear derailleur could take anywhere from a few hours to a few days to repair/replace, depending on the availability of bike mechanic expertise and spare parts. A massive question mark ‘out here’.

My bike was fine thank goodness and I kicked back on the leeward side of the gas station to consume my lunch. It was quite busy, a steady stream of Saratoga locals coming and going. They were quite an inquisitive bunch and would give me a good look up and down as they passed, quite obviously wondering what the hell I was doing in their town dressed in brightly coloured spandex and redecorating their favourite gas station forecourt with skittles, gummies and brown food crumbs. There were no words involved, just a good stare down. To stave off any self-consciousness I began greeting each inquisitor with my gruffest Crocodile Dundee-like “G’Day!” as they passed which more often than not produced quite the WTF expression.

The next 70 kilometres were dedicated to getting the Foxtrot out of Wyoming. There was not much wind around by then and the scenery was not unpretty, mostly massive ranches but State Road 230 was serving up some of the crappiest hard shoulder conditions of the race – ripples strips and tar divots every 10 metres or so that continually jolted my bike every couple of seconds. I mean for f*ck sake!

I was done with Wyoming and just wanted to get it behind me. I felt this more for Wyoming than I did for any other state during the Trans Am.

Sorry, Wyomingite’s! I found Yellowstone and the Grand Tetons amazing but the 2.5 days I spent in your state after that were miserable.  That said however, I would absolutely not change one element of my time in the Equality State. I am a stronger person and cyclist for it. Wednesday June 14, 2017. The Southern part of Wyoming near the border with Colorado was all massive ranches.

Out of the 10 states that the Trans Am route traverses Colorado is the only one I had been to before and it was thus with a sense of familiarity that I finally rode up to the Wyoming/Colorado State Line. That was not all I was feeling of course but I’ll spare you the expletive-laced tirade as I have no doubt made my thoughts on my time in Wyoming abundantly clear. If not lets put it this way – the “Welcome to Colorful Colorado” sign pictured below may well have said “Welcome to the gates of hell” and I still would have been eager to pedal on. I rolled into Walden just after 7:30 pm. There were plenty of possible cycling hours left in the day but I was exhausted and had nothing left to give. I got a room at The Antlers Inn (very expensive but I didn’t care), picked up some gas station food to microwave in the room, ate, washed my clothes in the bath and then crashed.

I’d done 248 kilometres for the day, below my daily goal distance I’d set before the Trans Am of 270 km but I felt like I was getting back on track after some tough wind affected days.