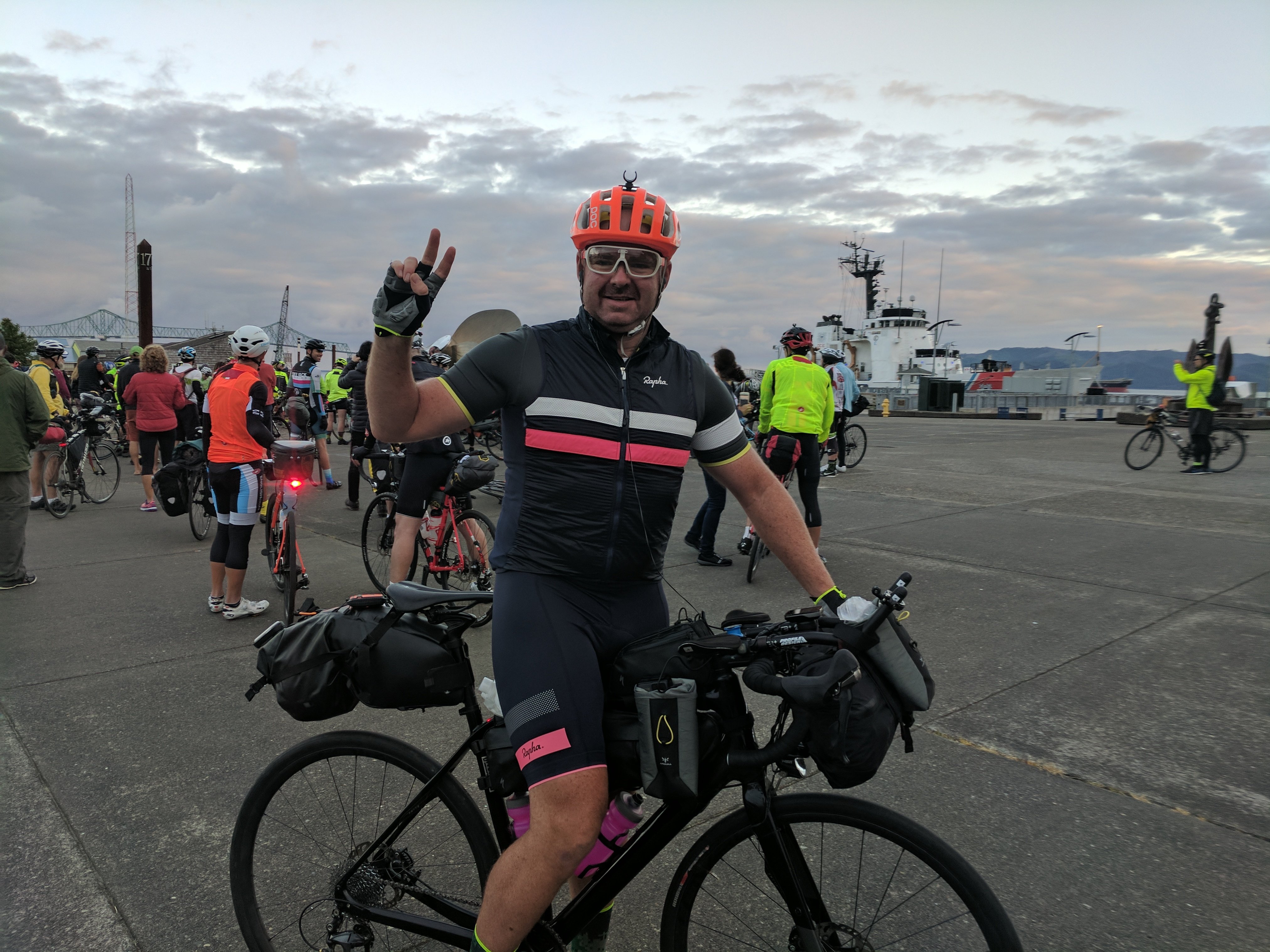 Saturday June 3, 2017: I was awake before my alarm went off at 4:30am. I was staying in an Airbnb on a wharf right on/over the Astoria waterfront and it was not the barking sea lions that woke me although they were making quite a racket, it was my excitement and anticipation that jolted me from my sleep.

The morning of the Trans America Bike Race had finally arrived. In fact it was due to start in 90 minutes! Shit gotta pack my bags….

I was a bundle of nerves and excitement the night before and just couldn’t seem to quiet my buzzing mind long enough to be able to methodically pack. The OCD gene tweaking process of short listing and fine tuning what I would take on the Trans Am over the last few months had not let up even the night before the race. How many gels and electrolyte sachets should I have easily accessible? Should I store all my USB cables in my top tube pack or half there and half in my seat pack? Where should I store my rain jacket? etc etc. Questions I had answered many times before but that were nevertheless paralysing me at that moment.

To relax and thus ensure I actually got some sleep I instead lay everything neatly on the floor and watched a movie.

My mind had suitably calmed by the morning to allow me to pack everything in some semblance of order but it took a lot longer than it should have. Even longer if I’d answered the calls from friends and family in Philly, Australia and the UK undoubtedly calling me to wish me luck – thanks guys but I had stuff to do.

Anyway, I was finally ready to rumble at 5:45am, now borderline late but a cheekie selfie to record the moment was definitely on the cards…. The quiet 5 minute roll down the Columbia River front to the start in the cool Astoria air was magic. It was the first time in months that I could actually relax knowing that there was nothing more that I could do in preparation. A smile spread across my face and the pre race nerves disappeared to be replaced by a sense of calm excitement. All I had to do now was peddle my bike and soak up the adventure of a lifetime.

I was pretty much the last to arrive at the start where Nathan Jones, Trans Am Race organiser and Ultra Distance Cyclist Extraordinaire was already par way through his pre start speech. I looked around at the other 120 odd intrepid cyclists from all around the world. Such a range of kit, bikes and experience levels but all united by the desire to squeeze that little bit extra out of life for the next month or so.

I got the guy next to me to take a photo…. …..and of me and Mike Benigni from Detroit, Michigan. Mike and I had met online via the Trans Am Facebook page and had instant messaged quite a bit before the race. I had only met him in person briefly the afternoon before at the pre race meeting but couldn’t help but feel quite a connection with the guy, which may well explain the one armed bear hug in the photo below. I wondered how much I would see him during the race and indeed whether I would see him ever again. And then all of a sudden in an exultant symphony of cleats clicking into pedals, purring rear hubs and cyclist chatter mixed with the occassional cheer from the small crowd of supporters, we were off…..and racing! Saturday June 3, 2107. Still image from a GOPRO video I took a few hundred metres into the race. I was rather excited!

Despite it being a neutral start the field strung out pretty quickly. From what I could see and hear there was a little bit of chat here and there but for the most part everyone just had their head down, settling into their own rythmn and concentrating at the immense task at hand.

Hi, How Ya Going?

I had brief interactions with riders as they passed me or I passed them. I saw another Aussie, Lochie Kavanagh who I met a few days earlier at a bike shop in Portland spinning furiously on a bike that he had only owned for a few days. He was obviously still getting used to the set-up. I saw Mike Benigni briefly and another chap from Connecticut who I had spoken to at the previous nights race meeting. He wasn’t that keen to chat though.

The first proper conversation I had was with Øivind Erevik from Norway whom I came across about 90 minutes in to the race near the coastal town of Seaside. I had met Øivind the night before and we chatted some more about our bikes and kit. We actually had the same bike and same dyno light set-up.

Further down the road I had some brief chat with Anton Lindberg from Sweden. We were there or there abouts each other for a good few hours and kept passing each other, him passing me going up hill and me passing him going down hill. It was getting rediculous and we shared a chuckle every time it happened.

Again I couldn’t help but think to myself would I ever see these people again? Saturday June 3, 2017. Riding alone the coast path with Øivind Erevik near the town of Seaside. Saturday June 3, 2017. Crossed paths with yet another Scandinavian, Anton Lindberg from Sweden.

The first 170km of the route ran south along the pacific coast. The scenery was quite spectacular: Oh Yeah Its a Race

It was about 1pm and definitely time for a break for food and water. I was feeling good and happy with my progess thus far having covered around 160km in just over 7 hours of riding.

I decended into the coastal town of Pacific City and parked up in front of a Market and Deli on the main street, not before fish-tailing and almost coming off in the beach sand that had blown all over the road. It was way too busy inside with the early summer holiday lunchtime crowd so I walked up the street a bit to an up market looking coffee shop. I ordered a rediculous amount of food at up market prices and walked back to where my bike and the other cyclists were, to consume.

The spot was quite a popular rest stop and Trans Am’ers were coming and going. I couldn’t help but pick up on the fact that they were all in a hurry, mostly standing to quickly throw down the bear minimum of food and drink before stuffing the leftovers on their bike or clothing before hitting the road again. They were racing.  I was learning that the race was not just on the road but in also keeping stopping time to a minimum.

Risking indigestion I smashed the rest of my sandwich and pastries, topped up my water bottles and made ready to resume The Race. Mike Benigni had just rocked up so I waited a few minutes for him to get sorted (a lot more efficiently than me may I add) before rolling out with him, with a renewed sense of urgency. I rode with Mike for a while and then put my foot down. Going into the race I had no real plan as such. With no experience that came anywhere near the Trans Am I had basicly decided to ride on feel with a general goal of covering around 270km per day. At that moment I felt good and so I road hard leaving Mike to ride…..sensibly.

About 10km from Pacific City the route turned left and headed inland. Progress across the country was commencing. Saturday June 3, 2017. Heading east into the Oregon Hinterland. You can just about make out Mike Benegni who was catching me up.

Yes, I was feeling good and really enjoying the 1st day of my great adventure.

I was riding hard and for the remainder of the day pretty much by myself. Mike had caught up with and passed me and then I caught him at a Gas Station on the Salmon Highway near the town of Grand Rond. After that we lost track of each other and I wouldn’t see him again for another 4 days.

About 280km in, 20km from the large town of Corvallis my parents skyped me. They were pretty ambivalent when I had mentioned to them 9 months earlier that I was going to do the Trans Am. I don’t actually think that they expected me to follow through with the rediculous idea of riding my bike across the US. However, since their visit to Philly in April where they witnessed first hand the training I was doing, they began to see that I was very serious and determined about the goal and subsequently began sharing in my excitement. They had even joined Facebook and Instagram so that they would not miss an update and were becoming Dotwatching experts having practiced using the tracking software Trackleaders during my earlier ride from Portland to Astoria.

Anyway, we had a lovely conversation. The first of many such conversations over the entirety of the race. Their support and that from other family and friends would prove invaluable in motivating my efforts to get to the finish in Yorktown. My goal for the day was the town of Corvallis 300km in but buoyed by the conversation with my parents and still generally feeling pretty damn good I thought I’d crack on for another hour or so.

I did however stop for a feast at the Burger King in Corvallis where in between shovelling food n’ shake into my gob I booked a hotel 30km further along the route in Harrisburg.

I was tired but extremely satisfied with my efforts for the day when I arrived at the hotel at around 9:15pm. I’d pre-arranged a room key in a lock box so I went straight to my hotel room passing a couple of other racers who were frustratingly trying to get someones attention outside the locked office. (Which they ended up obviously doing so as they got a room right next to me – saw their initials on Trackleaders but can’t remember who they were)

Still wired from the “days play” I uploaded some photos to social media and edited a short video from my GoPro and didnt fall asleep until after midnight. Awrighty then, after quite the sabbatical I'm bac

We're not in Kansas anymore. . Snaps from today