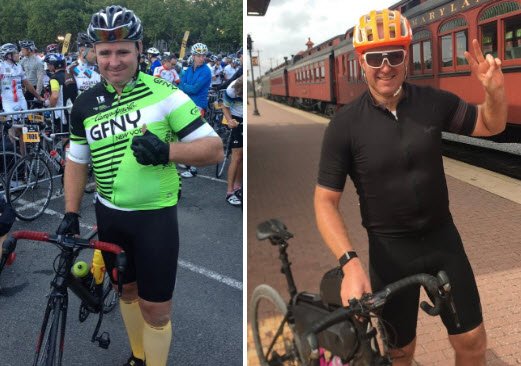 How Training For The Trans Am Has Changed Me

I started training for the 2017 Trans America Bike Race 5 days after having The Snip mid September last year. I was secretly hoping Melissa would let the subsequent substantial time in the saddle take care of business ‘naturally’ but alas it wasn’t to be. Much like that procedure changed me the over 11,000 kilometers and counting of training that I have since put in has also changed me…

Now I am not talking about the obvious changes here. I fully expected and have lost a fair bit of body weight from my coach Lee’s arduous training plan. Although genetics will probably preclude me from ever looking like a proper cyclist I now definitely cut a more svelte figure in lycra and less so resemble 4 wombats wrestling in a hessian bag. From 4 wombats wrestling in a hessian bag to 2.

Due to the training miles taking me a long way from home base I am also a lot more prepared and able to fix my bike when it breaks down and a lot less likely to rely on Uber or my long suffering wife to pick me and bike up following minor mechanical mishaps. This positive change I also expected. A tubeless flat no longers requires a cheeky Uber or call to my wife for roadside rescue.

What I am referring to here is a fundamental and unexpected shift in my thinking that has occurred during my training for the Trans Am. In fact the epiphany happened just last weekend during a long out, overnight and back training ride.

My dress rehearsal for the Trans Am is a 620 kilometer race from Pittsburgh to Philadelphia called the Crush the Commonwealth. Lee had uploaded some outrageous training hour requirements into Training Peaks and Melissa just so happened to owe me a night off from the kids so I thought I’d chew through said training miles by recce’ing the second half of the Crush the Commonwealth route. Ride out to a town at about the halfway point, stay in a hotel and then head back the next day. A great opportunity to test some kit as well. My Trans Am bike all loaded up.

I was up at 4:30am the next morning but felt it immediately……I was on a bad day. Bugger all energy. The usual feeling of excitement that accompanies this kind of weekend adventure replaced by lethargy, mind games and procrastination. In fact it took me over 90 minutes to summon enough motivation to head out the door. The fact that it was just above freezing outside didn’t bloody well help.

This early morning pre ride lethargy happens occasionally but it usually just disappears once out in the fresh air and is replaced by a feeling of satisfaction and eagerness for adventure. Not on this particular morning however. I just couldn’t get in the groove, legs felt hollow, energy was very low and my mind was fighting every single pedal stroke; “You must be getting sick”, “Just head home and make up the miles another day”, “How the hell are you going to do the Trans Am you soft bastard”….

And then the headwind hit, and hit hard!

Four and a half hours in I simply got off my bike and lay down next to it on a patch of grass by the side of the road. I lay flat on my back for a few minutes before calling Melissa to tell her I was struggling, which I have never done before. I really don’t know what motivated the phone call. Perhaps I knew deep down that I would never allow myself to simply give up but if “permission” was granted by somebody else it would be ok to quit the ride.

Unsurprisingly no such permission came from my wife. She just knows how important these training miles are to me achieving my goal of completing the Trans Am and thus would never get in the way of me getting them done.

And then the event that stimulated my epiphany occurred.

I had just finished the call with my Melissa and out of the corner of my eye, about 100 meters down the road from where I was lying was an Amish horse and carriage heading towards me.

A brief point of digression here: I love riding out near Lancaster, Pennsylvania in Amish country. The scenery of rolling farmland is beautiful and fascinating at the same time. It is like going back in time. The people in their old style clothing, wide brimmed hats and men with their beards. The old fashioned farm houses and farming methods. The horse and carts which clip clop along the country lanes…..Magic stuff. Anyway, back to the story: this particular horse and carriage was the first one I’d seen that day so I thought I’d grab the gopro and film it coming towards me. Which I did and captured this pretty cool still photo: You can actually see one of the people in the carriage waving at me. In fact the carriage pulled up just past me and a whole Amish family appeared grinning and staring at me. I must have been quite the sight, spreadeagled by the side of the road. One of them asked if I was ok and all I could reply was “yeah good thanks, just having a rest”.

It was this simple random act of kindness from a complete stranger that completely jolted me out of my negative mind space. I smiled, got back on my bike and started pedaling. The wind was still smacking me in the face and my legs still weren’t on script but I somehow felt so much better. I was no longer fixating on the pain and frustration but moreso just riding my bike and taking in the scenery.

7 hours later I was in my hotel in Chambersburg, overjoyed at my effort and demolishing a BBQ chicken pizza and fettuccine boscaiola. I’d done longer and arguably harder days in the saddle but I was particularly overjoyed at the fact that despite feeling like absolute crap earlier in the ride I had managed to overcome these feelings and just get it done.

The next day my energy levels were well and truly back and my form was great. I absolutely flew home in 3 hours less than it took me to ride out. I was back baby! Even the road signs were on my side on the homeward leg.

This short phrase is plastered all over the internet under various guises.

In a cycling context, I have understood these words to be true but moreso on a superficial level. It just tends to make sense that you will not always feel like shite while riding your bike. Otherwise why the f..k would you ride in the first place.

However, the emotional roller coaster of this 2 day training ride changed me in that I absolutely know these words to be true on a much deeper level. I now have the absolute confidence that no matter how crap I feel on the bike, I will feel better at some point. It might take time, a litre of Coca Cola, a good night’s sleep or a chance encounter with a smiling Amish family but it will happen.

An invaluable change in mindset 6 weeks out from the Trans America Bike Race!