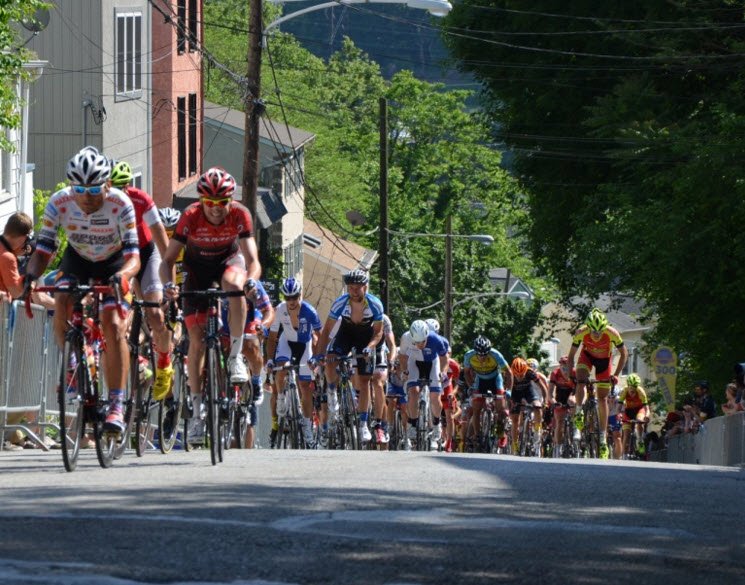 Europe has Alpe d’Huez, Mont Ventoux and Passo Mortirolo. The US has the Manyunk Wall which is only 800m long but as a central feature of the annual Philadelphia International Cycling Classic it has become according to VeloNews.com “one of the most revered places in American Cycling”. And as it is just down the road from me I give it a good crack every now and again.

The organisers of the inaugural Philadelphia Cycling Classic in 1985 set out to design a race that not only showcased Philadelphia but was also comparable in difficulty to the races in Europe. As the race was to involve multiple laps of a circuit the only hilly place close enough to the city was Manyunk which possessed many steep roads branching off Mainstreet. The chosen roads were Levering Street, Cresson Street and Lyceum avenue which added a further European flavour due to a short stretch of worn cobblestones on Cresson Street and the row homes that border Levering Street and Lyceum Avenue.

Since 1985 thousands of boisterous revelers gather on this combination of streets in Manyunk each year to witness epic battles. Some of the biggest names in cycling. Lance Armstrong (granted big name yet infamous), Sean Yates, George Hincapie and André Greipel have all tactically used this hill in their efforts to win the Philadelphia International Cycling Classic in years gone by.

And so this hill became known as the Manyunk Wall and was officially recognised as such by the presentation of a plaque in 2002.

Come Spring 2016 I look forward to hopefully updating this blog post with a substantially improved effort……so hold on to your hats!

The video below is of my effort up the Manyunk Wall during the 2015 Bicycling Open. Not one of my faster efforts, in fact with the volume turned up you can almost hear me cough up my breakfast, but you will get a good idea how bloody steep the hill gets about half of the way up….