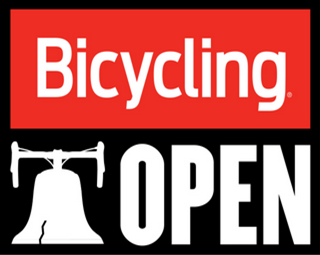 (report written 3 months after the event)

The Bicycling Open is not really a Gran Fondo or Sportive or race per se but moreso a “recreational ride” as the organisers call it that provides amateurs of varying abilities the opportunity to ride the Philadelphia International Cycling Classic course before the pros.

I was “fresh off the boat” from London in June 2014 and was spending time with my parents from Sydney who were helping us acclimatise to our new life in Philly, so even though this ride was on my radar in 2014 I didn’t make it, but was adamant I’d make it the following year, which I did and was glad that I did. It really is just a 75 minute stretch of the legs early on a Sunday morn but it is always a shedload of fun to ride a course where the roads are fully closed and you get to test yourself against other lycra adorned weekend warriors.

The Philadelphia International Cycling Classic is a big deal in American professional cycling and the course has varied quite a bit over the years since the first such race in 1985. The 2015 route was a 12.3 mile (20km) circuit that the male pros did 9 times, the female pros did 6 times and us chumps did as many times as we could before getting kicked off the course. Yet again the Manyunk Wall is a major feature of the race. Long story short I almost didn’t make it. An early start for these types of events is par for the course and in my sleep deprived state I completely forgot to pack my front wheel.

Now I’ll try most things once but one of them does not involve attempting to ride a road bike with 1 wheel. So, in a hail of gravel and screeching ties I was off back home to pick up the recalcitrant wheel only to return 40 minutes after the official start. A real shame as I missed out on mixing it with the 300 odd participants but still managed to bang out a solo lap and a bit, which you can check out in the gopro footage:

That first lap was a bit of fun so I just kept going. I knew the men pros would be starting soon but had no idea from which direction or when they’d be getting close. I just assumed that I’d be kicked off the course by an official a safe amount of time before the peleton swept by. Well, there was no such official and so I kept merrily cycling away having no idea that the whole bloody peleton, complete with motor cycle outriders and support cars was bearing down on me as a crocodile would a wounded wilderbeast.

Perhaps an overly dramatic metaphor but you tell me post watching the video below that I didn’t come damn close to being main meal for the peleton:

Just as well I was hugging the inside gutter eh?

Yep, I survived and a great morning all ’round. I’m glad I made the effort to retrieve my wheel and join the ride albeit 40 minutes late. A hot tip for anyone considering doing this ride next year: make a day of it. The start and finish of the Bicycle Open is on Lemon Hill, a cracking place to watch the pros and you’ll be there early before the rather large crowds head in so you’ll be able to park your car closeby and park your backside with a great view of the action, as demonstrated by the following vid: