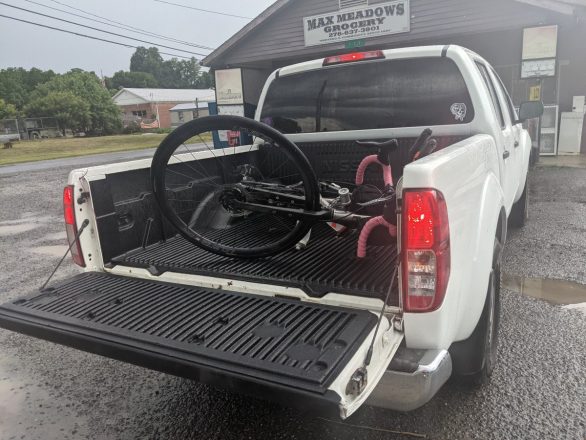 Thursday July 1, 2021: Breakfast was included in the hefty room rate so I indulged. My body and mind needed the better prepared calories and the additional rest. I would need both for the day I had planned. Buchanan, 280ks up the road was the target, the stretch target Lexington 50ks further on. As I lingered over a substantial breakfast I could already feel that I had recovered poorly and the blister was already throbbing with pain, but the determination tank was full to the brim. I could already feel the hugs from my wife and boys, and smell the sweet, salt air of the Atlantic. Given that and the fact that the terrain would be a little friendlier today both targets were very doable.

A very late finish tomorrow or in the AM Saturday was absolutely on the cards! Out into the morning at around 8am. First port of call the Dollar General for supplies. I considered buying some heavy duty scissors to cut a hole in my right shoe to relieve the friction on my blistered toe but thought better of it.

Back on route and heading out of town on Douglas Drive some bloke yelled out to me, something about what place I was coming in the race. It was so out of the the blue and I had not quite shed the cobwebs that all I could muster was a mumbled:

The penny dropped a little further on. It must of been Larry from Crazy Larry’s Hostel fame. Larry posts sporadically in the Trans Am Facebook Page as he runs a Hostel for Trans Am racers/tourers as well as the many hikers that pass through town on the Appalachian Trail.

There is an off road trail that heads out of town, the Virginia Creeper National Recreation trail which is a 50 kilometre multi-purpose trail (bikers, hikers and equestrians) that runs to the North Carolina state line. It runs sort of parallel the  Trans Am route for a while but is nowhere near worth taking as it adds unnecessary distance and eventually heads off in a different direction. However, some bloke in a dilapidated pickup truck who pulled up next to me a few kilometres out of Damascus, thought differently:

“Get on the fucking trail!”

“I beg your fucking pardon?”

A few more pleasantries were exchanged before he pulled away. I then tucked in behind him to take a left turn and then in the classiest move of our little tête-à-tête he proceeded to slam on his brakes. Yep, I almost ran up the back of him but the skills honed from 25 and a bit days on the road came  to the rescue. Thursday July 1, 2021. On the stretch out of Damascus before my little run in with the Creeper!

Anyway, back into it. It was a tough 40ks to Sugar Grove  which took almost 3 hours of false flat to 3/4% pretty much the whole way. I pulled into another Dollar General to stock up. As I sat out the front sippin’ and eatin’ I reviewed the plan. It was after 11am and I still had 240ks to reach the closer of the 2 target towns, Buchanan.

I was not a fan of the current situation.

More gradual climbing out of Sugar Grove and then the south westerly hit……..hard…….from behind me. A more satisfying tail wind I have never, ever experienced. It pretty much blew me the whole way to the large town of Wytheville, in the drops, pedals to the metal, squeezing out every last  drop of the assistance. Wooping and hollering the whole way.

Despite the abundant services I daren’t stop and pedaled on, still wind assisted to the next town of Max Meadows where I stopped at the Presbyterian Church on the way out of town to catch my breath. The route had just veered towards the south and I was to be wind assisted no longer, rather the opposite so a little sit down on the Church stairs to regroup for the battle.

I reviewed the data. Ok, so its just after 1pm and I’ve banked 110ks. Reaching Buchanan by a reasonable hour is very doable now!

As if on cue a rumble in the belly….

I looked around in desperation. There was a convenience store a hundred or so yards back from whence I had come. I pedaled over to it.

“You got a bathroom mate?!”

“Down the back man.” said a friendly chap.

Thank fuckity fuck for that, I said to myself as I waddled to the back of the store for an experience more in keeping with civilised society than of yesterdays abominations.

Ok, so now I’m in a convenience store I might as well kill 2 birds and stock up. As I was doing  so I chatted along with Scott, the clerk of the store. A really lovely bloke.

As I was paying up I chatted some more with my new mate, Scott and another chap and then headed outside to pack up my bike. As I was doing my bike fell over. Skittles and gummies went every damn where.

Scott and the other guy came out to see what all the commotion was about.

And then I saw exactly what had happened. My trusty steed was resting squarely on it’s rear derailleur.

I picked up my bike and examined the derailleur.

There was no mistaking that it was now sitting at an angle that was far from 90 degrees. However, in full denial mode I simply gave it a bit of a tap, leant up the bike with a little more care this time and proceeded to clean up the mess I had made. I then went inside to purchase another 2 family sized packs of Skittles and gummies.

Finally back on the road I very nervously and gingerly flicked through a couple of gears. Everything seemed alright thank goodness but as the gradient ramped up a tad and I changed into a lighter gear and upped the torque………..BOOM…….the whole damn derailleur exploded! Thursday July 1, 2021. Riding into the Garden of Eden with the wind at my back. The disappointment hit me like a truck. No effing and jeffing. The wind had been well and truly taken out of my sails. All I could muster was a quietly mumbled to myself:

“Well I suppose that’s that then.”

A brief summary of the next 4 and a half hours:

Holy fucking shit. I still maybe in this! Thursday July 1, 2021. My ride back to the Convenience Store in Max Meadows. Thursday July 1, 2021. My beautiful little family at the monument.

Friday July 2, 2021: The bike shop didn’t open until 11am but even though the boys would be working on my bike from before then they suggested I not arrive until after Midday. It was a very weird leisurely morning. It felt very wrong. I didn’t want a leisurely morning. There was plenty of time for that after the race. I wanted exhaustion, pain and suffering and I wanted it now, damn it!

I really had to consciously fight the frustration of not moving forward.

Anyway, I arrived at East Coasters at around  12:30pm. The run down as follows:

There was still a bit of work to do on the bike so I walked barefoot across to the nearby Starbucks for coffee and snacks.

About 90 minutes later my bike was ready. As I was putting my bags back on the bike, another problem unveiled itself. During all the commotion of the last 24 hours I had lost my Garmin. Furthermore, in one of my manic decluttering episodes I had posted home my backup Garmin device last week in Missouri.

You must be fucking joking!

All I could do was let out a pained giggle. I did have the  route on my phone, via the Ride with GPS App but I’d never navigated with that before and it would be a massive drain on my phone battery – refer reduced device charging capabilities above.

Anyway, a group photo out the front of the store and it was fist pumps, thankyous and bon voyages! One of the lads had incredibly kindly offered to drive me back to Max Meadows so we jammed my poor old bike in the back of his mid sized sedan and off we went.

Back at Max Meadows I was reunited with man the himself, my Savior-in-Chief , the legendary Scott McHale.

More fist pumps, thankyous and bon voyages and at just after 3pm I was back in the race, 26 hours after the chaotic aftermath of that seemingly innocuous belly rumble on the Church steps. Friday July 2, 2021. My ride from Blacksburg to Max Meadows.

It immediately became obvious how adversely my ride had been affected. The front wheel rode very rough and the Ride with GPS App on Portrait view was pretty much unusable. However, it was the inability to shift gears that made life very hard. I stopped, manually placed the chain in the middle of the rear cassette and battled on.

90 minutes later, as the terrain got a little lumpier I was stuck in an unusable gear and ended up walking up the hills, with no shoulder/no verge and with cars whizzing past, seemingly inches from my left shoulder.

Something broke inside me – Fuck this, I’ve had enough!

For the next 30 minutes the ole’ ultra adage was on repeat in my mind; “No decisions if you are tired, cold or hungry. Fix it, then move on.” I was beyond that now. Yes I was rolling, but I felt unsafe and furthermore with my bike as is I had no idea when I would be able to finish. My wife and boys had accommodation sorted for tonight but they will need to find something else, well out of Yorktown for at least another 2 nights, upwards to 3 or 4. It just ain’t fair to stuff them around like that.

I got a room at a hotel at the Interstate 81 services in Newbern and rang my wife.

She’s received similar calls before and knows exactly what to say to get me back on track.

She could tell in my voice that there was nothing further she could say. Silence for a little while and then there may have been a couple of tears shed from either end of the phone. Friday July 2, 2021. This may have been the point where I knew my race was over. I had just pushed my bike to the top of this hill. Saturday July 3, 2021, 2021: From the Friday, into Saturday and off and on for the next year I felt the sting of disappointment – I am feeling tinges of it now, writing about it. However there are 5 massive silver linings. In no particular order: Saturday July 3, 2021. A tad of an upgrade from the Blue Ridge Parkway. A lovely evening with Chris and Gretchen.