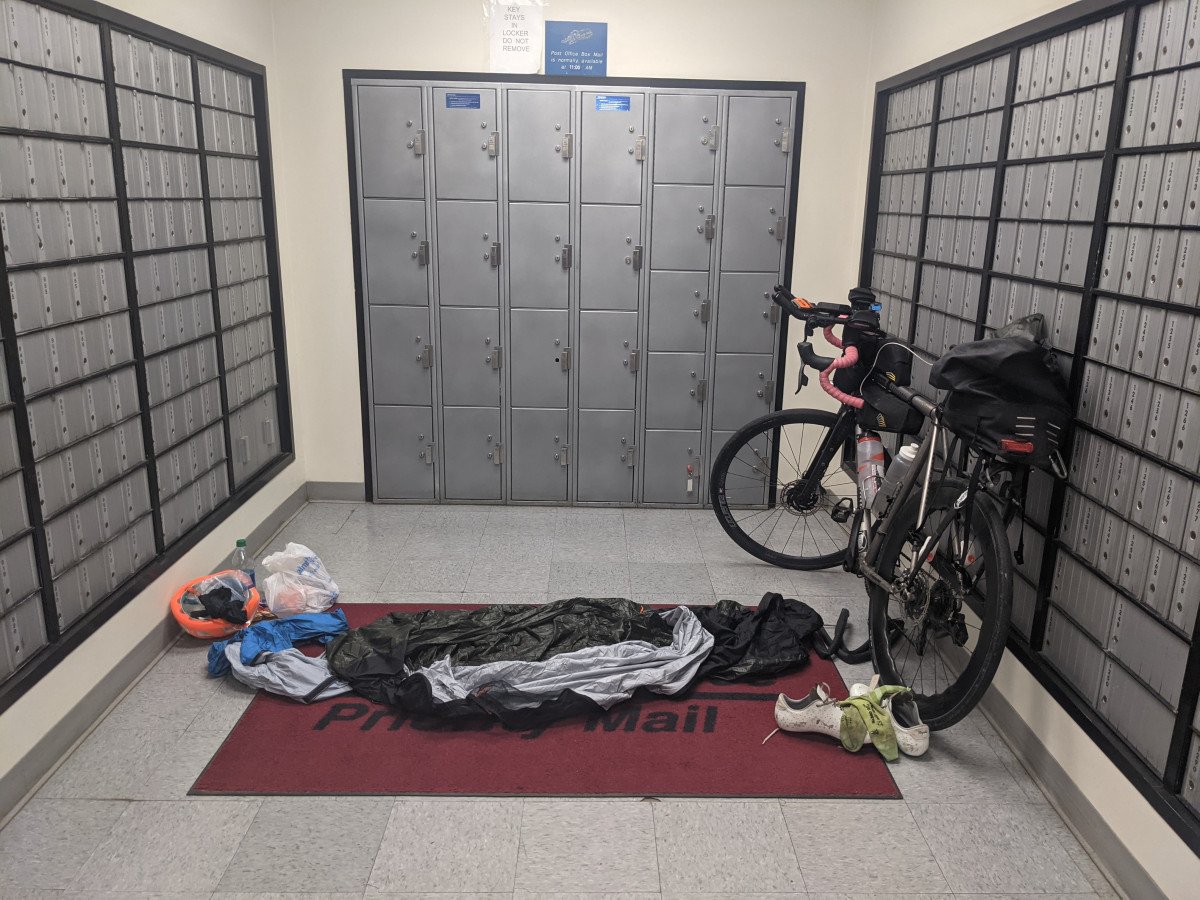 Tuesday June 29, 2021: Plenty of faffing about last night and it hadn’t been the early night that I had planned so my first alarm of 2:30am was met my curt No fucking way!. The second at 3:30am by a more compliant Awrighty then, lets get going, motivated entirely by the fact that I could not afford anymore sub par days. Today was Tuesday, my wife and boys would be driving down to Yorktown from Philly on Thursday, staying that night and Friday night opposite the monument. I was still 1,250ks from Yorktown. Given arguably the toughest part of the race was between me and there (the Appalachians), a Saturday finish was the best case scenario.

My last 2 days had netted 355ks. Un-freakin-acceptable! Regardless of how I was feeling, I would have just have to crack on. Seeing my wife and boys, and not inconveniencing them too much was my absolute priority.

As I pedaled from my hotel to the nearest open gas station for breakfast and supplies I couldn’t help but notice that I was still feeling rather shit. Feeling / schmeeling…….onwards!

The first 75ks to a gas station on the outskirts of Berea were tough but satisfying. I stocked up and sat out the front consuming some of what I had bought. I took the opportunity to take off my shoes for some relief. A blister on the little toe of my right foot was starting to really hurt. It had been tender pretty much all race, no doubt due to friction in wet socks from the early rain. I had last put a plaster on it a few days ago but hadn’t checked the actual condition of the blister since. I daren’t now as I had a feeling I wouldn’t be overly enthused by what I saw.

Before Foxtrot Oscaring I had a nice chat with a couple of blokes who were leaving for work. It was their daily routine to meet at the gas station for a coffee before commencing the 9 to 5 grind. They were both incredibly interested in what I was doing.

“Wow! One day I’d love to do something like that”, one of them said.

A subtle reminder of the privilege inherent in this ultra distance cycling malarky. We really are living the dream. An hour off the bike and then onwards through the large town of Berea, well known for its arts festivals, historic buildings and Berea College, a private liberal arts college. All the above primary reasons for why Berea is one of the fastest-growing towns in Kentucky.

Special mention of Berea College needs to be made. It  represents quite the “Shining University on a Hill”. Founded in 1855, Berea College was the first college in the Southern United States to be coeducational and racially integrated. The College charges no tuition; every admitted student is provided the equivalent of a four-year scholarship, additional expenses supplemented by a full participation work-study program in which students are required to work at least 10 hours per week in campus and service jobs for a monthly paycheck. The college prioritizes students from Southern Appalachia, but they also come from all over the US and the world, with approximately one in three students an ethnic minority or from overseas.

From Berea the scenery changes quite distinctly from rolling farmland to longer, steeper climbs up and through increasingly denser forests into the Daniel Boone National Forest. I have transitioned from the eastern part of the Outer Bluegrass region of Kentucky to the Cumberland Plateau region and the foothills of the Appalachian mountains.

Getting close to The Dogs now, my dog spray now occupying prime real estate in one of my feedbags. On my right side to facilitate my quick draw McGraw.

I make good time to McKee, rolling into the little town just after 11am. 116ks banked. I pedal around town looking for somewhere to eat but expediency looms large in my mind and so I backtrack to the Shell gas station I passed on the way into town. I am feeling ok, ably assisted by a less hot day. The humidity however is keeping me on my toes. Speaking of toes, my right little toe is becoming a real issue and I am walking now with a distinct limp.

My appetite has improved though and I get a little more satisfaction out of the usual.

Oh and I snapped a photo of another red truck! It was a quick stop, 20 minutes and then back into it.

An hour and a half later it becomes obvious that I may have spoken too early on the heat situation. The temperature climbs and right on cue I start to struggle. I need shade and a bit of a lie down and begin scouring the roadside for shade and grass but there was nothing for quite a while. Finally I spot a freshly mown patch just past some out buildings in the tiny community of Travellers Rest (ah the irony) just before a climb. It required a bit of a scramble off the road but it was oh so worth it. I set a timer for 20 minutes and let me eyes roll back in my head, fully asleep within seconds.

At the 20 minute alarm, I reset it for another 20 minutes.

Back on the road for another 30 minutes then a very quick stop (gotta keep the stoppage time down!) at a BP gas station in Booneville for supplies. Yep, I was very much in Danielle Boone territory now. Daniel Boone – the man, the myth, the legend, pioneer, frontiersman and folk hero who became famous for his exploration and settlement of what is now Kentucky. He opened it up to further settlement by blazing a trail (the “Wilderness Road”) through the Appalachians at Cumberland Gap, Tennessee (approx 135ks south of Booneville) and by purchasing land from the Cherokee Native American tribe.

Another 90 minutes of tough riding, plenty of up and down and after a fast descent I roll into the little town of Buckhorn. It was just after 3:30pm and I needed a break. I was dried out and my toe was killing me. I leant up my bike out the front of Sparks Trading post and sat down on a bench for a while to catch my breath before heading inside. My eyes are drawn to the large wooden Church across the road where JJ Simon and I stayed during the 2017 race. It was the night of Day 24 actually. In that moment I couldn’t help but compare 2017 vs 2021 – I had had plans of smashing my 2017 time but I was only a few hours ahead of it and falling apart. I was so much stronger 4 years ago, or was it that lady luck was more on my side then? Probably a combination of the two.

I take my shoes off, then socks, then plaster…

Bugger me! No wonder it is so fucking sore.

It wasn’t pretty. (WARNING: There is a photo below) An hour off the bike in Buckhorn fueling up, rehydrating and tending  to my toe with some antiseptic cream I purchased from the Trading Post. I scoured the shelves for quite a while to find the latter. They stock all manner of random stuff in there – some of it must have been in there for decades.

From Buckhorn, plenty more climbing through dense forest that every now and then opens up briefly to unveil tiny settlements of decaying buildings and cars. This part of the US and that which I’ll be riding through over the next day or so are amongst the poorest counties in the country. An area decimated by 200 years of of exploitation by Timber companies, then Coal Companies and now by the greed of certain Pharmaceutical companies and the resultant Opioid Epidemic.

I am not a God fearing man but I truly see the relevance and importance of religion in this area. Well maintained Church’s, particularly of the Baptist persuasion are everywhere.

After almost 2 hours of increasingly steeper and longer climbs the route turns right onto Kentucky Route 15, a busy dual carriageway and then a long steady climb on a dirty hard shoulder to the outskirts of Hazard, a bustling centre of coal mining activity.

Left turn onto another busy multi-lane carriageway, Kentucky Route 80 and a kilometre later I take the slip road across to a retail complex. There is quite the storm brewing and want to be quick so I pull up at a gas station to resupply.

The rapidly approaching storm looks quite ferocious so I call the Holiday Inn opposite to see if there are any rooms available. Its 6:30pm and I’ve banked 225ks – a respectable comeback day. Get a room, avoid  the storm and get out early on the morn.

Back on the road for 5 minutes before the inevitable storm hits……hard. Thunder, lightening, torrential rain, the whole kit and caboodle. Luckily I was not yet out of the built up area and I immediately pull up to a chain Italian restaurant to take cover outside. The rain isn’t going anywhere so I go inside, grab a table and order a plate of pasta, a salad and a bread roll. I am not hungry but it is a good opportunity to get some fresh food into me.

40 minutes later it is still raining but not hard enough to not get back on the road. Tuesday June 29, 2021. Decaying buildings and cars, take 2 but a well maintained Church further up the road. It is after 8pm now. My goal is to get to the Cyclist Hostel in Hindman 40ks down the road. I have rung the number but no answer was the stern reply. Hopefully someone will answer when I arrive.

90 minutes later, after the easiest 40ks of the day I pull up opposite the Pizza shop on Main Street, Hindman. I extract my phone and there is a text message from the number I rang earlier. The hostel is closed apparently due to Covid but I can stay at the Youth Center which is run by the Baptist Church, that I just so happen to be out the front of. All I have to do is knock on the door of the Senior Pastor’s home and he will let me in.

I follow the text message directions to the house but no-one answers.

Where the bloody hell am I going to stay?

I get back on my bike and roll down Main Street perusing my no-existent options.

Over many a day ultra racing I’d been doing everything possible to avoid this situation but the opportunity to earn my ‘Post Office Wings’ had finally presented itself. I was finally going to HTFU!