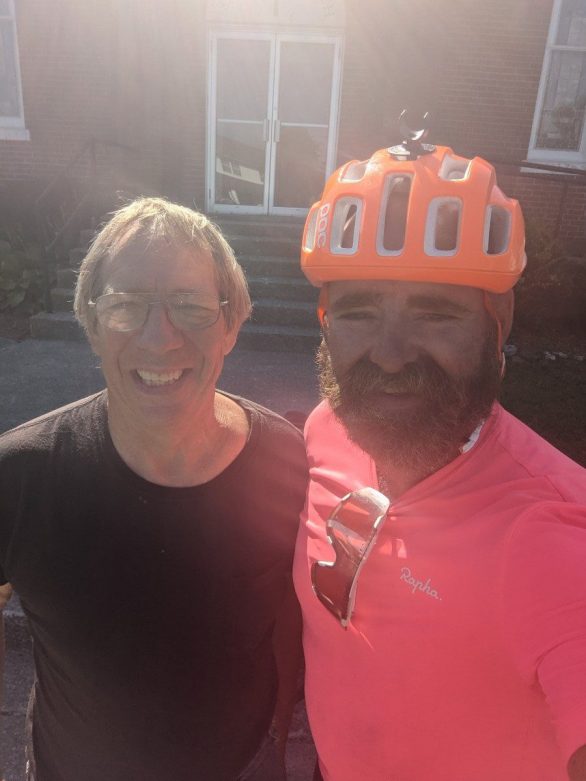 Monday June 28, 2021: I exited the guest house just before 6am, trying not to disturb my hosts. Again out into a beautifully coolish clear morning that I knew wouldn’t last. Given how the heat and humidity had been affecting me recently I’d been keeping an eye on the weather forecast – more of the same today apparently, maybe even more humidity – north of 90%! I really needed to get more riding hours done with the sun down but given my current rhythm of getting out around dawn I’m facing a full day of the heat. If the conditions continue I’m really going to need to mix it  up.

Oh well, lets see how I get on today.

From the guest house I rolled up Western Avenue with the aim of getting breakfast and supplies from the 24hr Shell gas station but spotted a diner that was open and thought. bugger it, I’ll treat myself. Whilst waiting for my omelette I started to feel quite down in the dumps. The fatigue was still there and I was starting to feel that I was never going to get back on form.

I was also feeling a little pressure too as my wife had booked accommodation for her and our 2 boys in Yorktown at a BnB directly opposite the monument for the nights of July 1 and July 2. Given that Yorktown is bit of a Ground Zero option for the 4th July celebrations those were the only 2 nights available. With 1,400 kilometres and the Appalachians still to go I had sweet bugger all chance of getting there on the 1st. Maybe late on the 2nd at a real push but I would have to hit my straps pretty freakin’ tout suite.

Then what am I fucking doing in a diner?!

The adventure seemed to be all of a sudden over. It was all about ticking off the milage now.

With the omelette and multiple coffee refills tucked away I gritted my teeth and got back into it. Straight off the bat a wrong turn which wasted 15 minutes of effort.

The next hour and a half was close to my lowest period of the whole race, up there with the stretch to Baker City, Oregon on Day 4 where I had very serious thoughts of quitting. Quitting was not an option now, that would be ridiculous given the hard yards under the belt but I was stuck in this darkly negative headspace where there was no light at the end of the tunnel, just more discomfort and suffering. I may have even shed a few tears of frustration.

By the time I pedaled over the Rolling Fork River and into the little hamlet of Howardstown I just had to get off the bike. The only noticeable shade was that of some stairs out the front of a church and I rolled over, plonking myself unceremoniously down on the concrete. Head in hands.

A few minutes later a car pulls up and a man gets out and walks over  to me.

Oh for fuck sake. What does this bloke want!?

Fully expecting some kind of “move on please”, I got up and walked towards him to meet him halfway in a possible pissing contest…………”Just grabbing some shade mate, I’ll be moving on soon enough.”

My new mate was Paul Boone, who had lived in the area all is life. As a young man he remembered the thousands of intrepid cyclists that came through in 1976 as part of Bikecentennial, a mass participation bike ride of about 4,000 people who rode across the US from Astoria, Oregon to Yorktown, Virginia in commemoration of the bicentennial of America’s Declaration of Independence. The Trans America Bike Trail route had been designed specifically for this event.

“They were a rowdy bunch” Paul said. “Weeks of partying in town.”

Paul mentioned a few times in our conversation that his son had passed away last summer and that he was still sorting out his affairs. It was very obviously on his mind and thinking about our conversation after the fact I got the impression that maybe his approach to me was because he just needed someone to talk to. He was dealing with his grief and I was dealing with my hardships. Obviously very different situations but in essence at that time we were two lost soles craving human interaction and empathy.

We walked around the grounds of the Church, St Ann’s Catholic Church and the adjoining school. Paul talked me though some history including how as a student at the school he was in charge of feeding the fish in the pond, which sadly is no longer there. He showed me where there was a spigot, which required some insider knowledge to operate and I gratefully topped up my water bottles and drank greedily from it for a while. The water had a distinct taste that I must have reacted to, as Paul assured me it had to do with the underground limestone and the associated higher  amounts of Calcium in the water.

“Good for making Bourbon.” he said.

It really was a lovely conversation which I will never  forget. Just writing about it now brings a smile to my face. Paul was adamant in me taking both his cell number and work number and I was to contact him at any time should I need any help. I obviously presented as a figure who needed help. I still have the numbers and will use this blog post as motivation to reach out to him. He mentioned that he had possible plans to set up some kind of rider rest stop in or near Howardstown for Trans Am racers and tourers. A very worthwhile topic to further the conversation. I hugged it out with Paul and then headed off , feeling better for the human interaction and the Calcium+ Howardstown water.

But not for long! More heat, humidity and the energy sapping up and down of the last remaining Knobs and I was back in the hurt house. On the approach to Bardstown, now in the Bluegrass Region of Kentucky – Bourbon Country, the scenery takes a turn for the prettier but all I had eyes for was a platter of Mickey D’s at the Bardstown Golden Arches.

Maybe that and the air con will breathe life back into me. Long story short my standard Macas monstrosity did not help in any way shape or form. In fact I could barely eat it, settling on just drinking the shake and Coke, storing the cheeseburgers on the bike and leaving the fries well alone. I somehow managed to force the Big Mac down my throat though.

Back into the furnace for another 5 hours of tough times including way too many breaks, before I called it a day in Harrodsburg. A well below par day but it was now crystal clear that a dead horse was being flogged. I am stubborn but not that stubborn. The sensible course of action, rather the only viable option was to rest up and get out early on the morn. Get some miles under the belt before the heat kicks in. Monday June 28, 2021. Pretty countryside that I was not really enjoying.