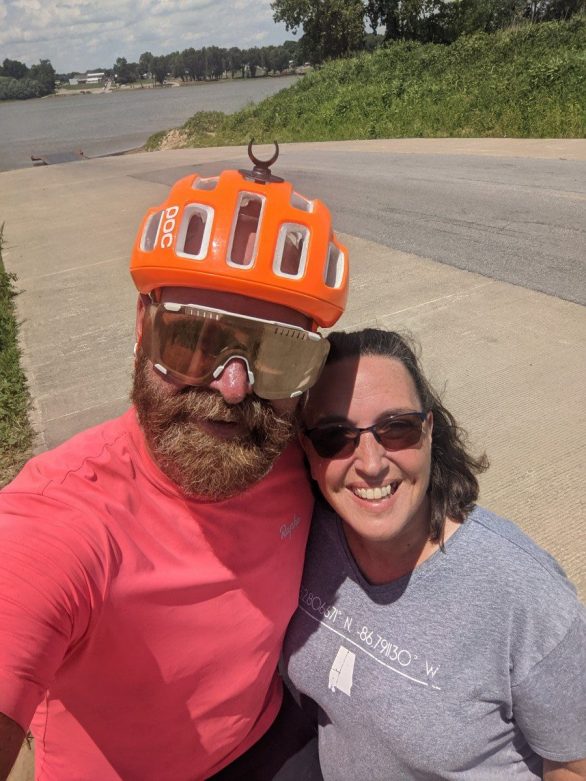 Saturday June 26, 2021: I was up just before 4am, out the door and on the road at 4:33am. I felt a deep fatigue in the body and mind that I hoped wouldn’t linger. Hopefully food will help – despite having no appetite (also a concern) I grabbed a few packaged pastries from the hotel lobby and forced the stale contents of one of them into my mouth and jammed the other 2 into my feedbag.

I was going to have to drink my calories this morning. I knew there was a 24hr Circle K gas station on the far side of town and pedaled off into the dimly lit Carbondale burbs to track it down. 10 minutes later I was back on route, 10 minutes after that I was pulling up at the gas station.

I walked the aisles bleary eyed having no idea what to buy and settled on a Gatorade, a large Redbull, grapes, a banana and sugary crap, including a couple of Cokes for on the bike. The on the bike Coke piece was a recently acquired habit. Everyone knows that immediate hit that the Registered Trademark provides towards the end of a long ride…..there’s a reason why you see cute little red cans being passed to the pro riders from the team car occasionally……well…….that was the dragon I was chasing these days.

None of the above worked however and only 90 minutes late I needed my first roadside snooze of the day….

and 2 hours after that my second… I was really struggling. I just couldn’t break free of the fatigue. I needed “outside assistance” so called my mate Scotty who’s banter was a proven source of laughs to take my mind off my woes.

“I’m walking the dog mate, I’ll call you back.”

An hour later he calls me back, however the one sided conversation was rudely interrupted, yet again by a poor cell signal.

No outside stimuli was working so there was nothing left to do but simply plug away. Eventually, just before Midday I rolled into the little village of Elizabethtown and headed straight for the Sinclair gas station and convenience store. I grabbed a couple of bacon biscuits (ie scones with bacon), drinks, ice-cream and supplies for the bike and then sat out the front watching a wide assortment of vehicles fuel up. There were boats on trailers, touring motor cycles, even a bloody ride on lawnmower. Plenty going on this Saturday late morning, quite a lot of the activity due I’m sure due to the summer vacationing crowd, drawn to Elizabethtown’s close proximity to the mighty Ohio River. From Elizabethtown a lumpy 15ks to Cave-in-Rock, during which time my attention was now well and truly tuned to the next stage of the adventure, Kentucky. Kentucky is a tough 800k section of the Trans Am, plenty of up and down, bugger all hotel accommodation on route (an issue for the “softer” racer), guaranteed hot n’ humid conditions and of course the fearsome wild dogs. With all the above on top of the inevitable fatigue kicking in from over 5,000 kilometres in the saddle, and the frustratingly closer but still so far away finish line in Yorktown, Kentucky cops a bad wrap in a Trans Am Bike Race context. A state to be endured rather than enjoyed.

Enjoyment way well be a bridge too far in my current elevated state of fatigue but I was however determined to look at my time in the Bluegrass State through kinder eyes. Four years ago I had been shit scared of any dog that moved but I now knew that the oft talked about dog issue was only deserved of any attention for a brief section in eastern Kentucky.

I just hoped that my Kentucky time could be kicked off with a hug from world famous Trans Am Bike Race dot watcher, Michele Lanham Hodge. Michelle is one of the most friendly faces on route. In pretty much every Trans Am Bike Race to date and for pretty much every racer, Michelle has gone to great lengths to welcome us weary racers to Kentucky, either at the Ferry terminal on the other side of the Ohio River, or nearby in her native town of Marion, where she gets us to sign her Inspired to Ride poster.

Michelle had been unable to get out to see any racers this year but I still held out some hope that I’d be on the receiving end of a good ole’ Kentucky welcome.

Once in the village of Cave-In-Rock, I made my way to the front of the line of queuing vehicles for the ferry. The ferry runs continuously from 6am to 9:30pm and can be a very relevant “obstacle” in a racing context. If you’ve every seen Inspired to Ride, you’ll know what I mean. No such issue for a 1pm crossing, although I suppose it could provide further breathing space from the next placed rider, Alan Murphy who was 140ks back in Carbondale, should he not make the last ferry. I was not going to slow down, absolutely not, but deep down I was hoping that Alan would catch up. It had been almost 10 days since my last face to face interaction with another racer…..

Once on the ferry I took the obligatory photos as the crossing of the Ohio represents quite the Trans Am moment, an all too brief, yet oh so sweet time where forward progress is provided by alternate means. I then took the opportunity for a micro-nap, the sun and mechanised vibrations triggering my fatigue.

….and yes, I got my hug………so nice of you to come out Michelle! Sorry you had to wait so long. If I had known I would have cut back on the snoozing. Saturday June 26, 2021. On board the Cave-in-Rock ferry, heading across the Ohio River to Kentucky. Saturday June 26, 2021. On board the Cave-in-Rock ferry, heading across the Ohio River to Kentucky. Take 2. The lovely little chat with Michelle definitely lifted my spirits and buoyed my motivation but by the time I made it to Marion, 17ks from the ferry, I was back on struggle street. I had a real hankering for some Micky D’s and the associated air conditioning, however the Marion branch was only open to drive through traffic (due to Covid) and the line of cars was ridiculous. I contemplated my “bike gets to jump the line” methodology recently implemented for the ferry and 2 weeks previously at the entrance to Yellowstone National Park, but was in no mood to negotiate the inevitable arguments that would ensure.

Oh well, across Main Street to the Five Star gas station and convenience store where I bought an insane amount of food, knowing that I didn’t have the appetite to finish it all hut hoping that the variety would pick me up. An hour off the bike banqueting in Marion, an hour on the bike battling the western Kentucky rollers through farmland, and then time for another nap. This time on a large patch of recently mown grass, in the shade of a Sycamore tree, out the front of a Baptist church. With a cooling breeze rustling through the trees, I couldn’t imagine a better place for a snooze. The perfect place to camp actually but it was only 4:30pm and I’d only banked 185ks. The writing was on the wall though – I didn’t have much more to give today. I perused my route notes – the biker hostel in Sebree, 50ks down the road was the closest non camping option. My 4th snooze of the day hit the spot better than the previous 3. In combination with the 40 minute snore-a-thon and the now slightly cooler conditions the 50ks through lush green, rolling corn and tobacco fields (Kentucky is the second largest producer of tobacco in the US), passed with less gritting of the teeth.

As I rolled into the old railroad town of Sebree just after 7pm I knew exactly what to do, as I’d rung ahead. A recorded message had informed me that I was to go to the yellow bungalow opposite the First Baptist Church where Pastor Bob would meet me and then show me around.

Pastor Bob was a lovely old bloke and he took great delight in showing me around the impressive space under the church that had been set up for Trans Am cyclists. There was a kitchen, games area, a lounge area and a couple of bunk rooms that turned out to be already taken by my roomies, 4 touring cyclists who Pastor Bob also introduced me to. There were plenty of other places to sleep – I ended up grabbing a sort of office room that had maps and all sorts of spare bike parts in boxes. I took some cushions from the couch area and laid a double sheet on top.

I was keen to call it a night but I knew there was good Mexican restaurant in town which I had stopped at during the 2017 race. A hearty meal would surely set me up for a big day tomorrow. I mentioned the place to Pastor Bob but he had his own recommendation, another Mexican joint on the other side of the railway line. Who was I to turn down a local tip, so off I went.

“Make sure you pop in for Strawberry pie on the way home Mark.”

“OK, thanks”, although at the time I had no intention of taking up his generous offer as all I wanted to do was eat and crash.

Turns out the Mexican restaurant tip was a cracker. Lovely food, served expediently and really hit the spot. On the way back to the hostel something inside me made me ride up to the yellow bungalow for pie. I was full and sweet slumber was calling my name but I just felt that the decent thing to do was to indulge the offered hospitality.

I arrived stressing that I couldn’t stay long but of course I was promptly escorted to a table of my fellow bike hostel residents, seated and then served a massive slice of fresh strawberry pie which Pastor Bob’s wife had specifically prepared for the  impromptu little soiree.

An interesting chat of like minded cross country cyclists mixed with conservative Christian values ensured. It was very obvious that both Pastor Bob and his wife genuinely enjoyed the company and the associated stories of the many intrepid cyclists from all around the world that crossed their path. It was quite touching. An hour and a couple of photo albums later though I had to forcefully yet politely excuse myself.