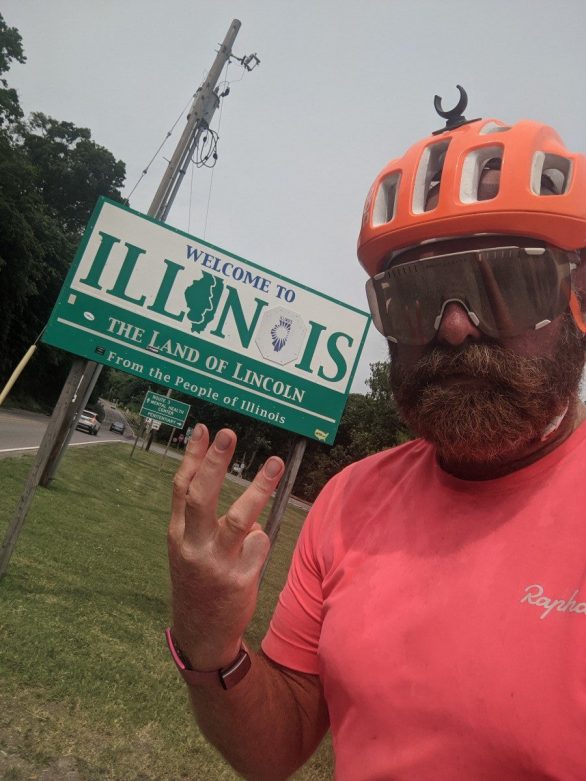 Friday June 25, 2021: I was up and at em’ at around 4:30am with a laser sharp singularity of focus – to get to the Trans Am Cyclery in Farmington, 95ks up the road, toute freakin’ suite. I was craving the peace of mind that the well needed bike maintenance would provide , particularly as the drive train had copped one hell of a beating over the last couple of days through the Ozarks. The KMC heavy duty chain that I had acquired 10 days earlier in Lander, Wyoming was starting to slip, putting the fear of God into me every time I had to put big force into the pedals to crest each of the ridiculous rollers. I just hoped that the package of additional spare parts (2 x tubeless tyres, 2 x extended length valve stems and a SRAM 12 speed chain) that I had arranged for my wife to post had arrived. I’d completely forgotten to call ahead and check.

Out into the predawn darkness just after 5am. Twilight was due but given the town of Ellington was in a valley, surrounded my mountains, it would be a little while before the light of the day would show itself.

Rolling down 2nd Street I was surprised to see one of the 2 gas stations open and even though I had plenty on board I pedaled on over for an extra dose of caffeine. Turns out they open early for the miners at the local Sweetwater lead and zinc mine. Mining has been an important industry in this part of the Ozarks since the mining boom of the 1840s and 1850s. Some of the place names in the area are a dead giveaway; Iron Mountain, Ironton, Graniteville, Mineral City and Pilot Knob.

Out of Ellington there was the same old standard Ozark up and down for a couple of hours and then a long steady 15k climb before the little town of Ghermanville where I stopped briefly at a gas station to resupply.

It was around 8:30am. 35ks to Farmington. At this rate I’ll be at the bike shop just after opening……..nice!

Out of Ghermanville onto the busy, dual carriageway of State Highway 21 for 5ks to Pilot Knob and then a left turn onto the road that would take me to Farmington.

The Ozarks were now behind me than freakin’ goodness!

Around 5ks out of Farmington the most bizarre of occurrences. A police car, no siren but with red and blues flashing, pulled up alongside me. I was head down, pushing hard, earphones blaring and just ignored him, thinking he would pass……but he didn’t. Out of the corner of my eye I could tell that his window was down and he was yelling something at me.

I ripped off my headphones….

“You don’t want a blind lady overtaking do you?”

What the fuck are you talking about? (I obviously didn’t say this out loud)

Anyway after a conversation of fits and starts I sort of got the impression that their was a blind female cyclist behind me.

“Damn right she’s not gonna overtake me!” I sad before giving the pedals a little more of a nudge.

20 minutes later, past police blocked roads and TV cameras poised to capture the excitement occurring behind me, the mystery of what the bloody hell was going down was unveiled by dot watcher extraordinaire Wayne Linnenbringer and his daughter Holly, at the Trans Am Cyclery. Turns out the lady cyclist was Shawn Cheshire who was also on a cross country bike ride, although a slightly different route from Eugene, Oregon to Virginia Beach, Virginia!

I have since learned more about Shawn. She served in the US Army for 8 years and then as an EMT-Paramedic. In 2009, while working on an ambulance, she sustained a traumatic brain injury which resulted in a total loss of vision. Rather than give up, which would have been very easy to do (I probably would of), she confronted her blindness head on and got involved with Paralympic sports. Shawn has since raced with the US National Paralympic Cycling Team in 20 national and 20 international races, including representing the USA at the Paralympic Games in Rio 2016.

Her ride across the US, “A Blind Odyssey” was her attempt at becoming the first blind athlete to cross the US continent by bike. On the epic journey she was also taking the time to visit schools for the Blind and making connections with first responders, veteran organizations, disability advocates and cycling communities.

My head literally hurts trying to comprehend the effort and grit required to do what Shawn did. I only wish I showed a little more curiosity on the day and hung back to chat with her, rather than being stuck in my own head…….again.

I love being reminded of the sheer brilliance of humanity and the indomitability of the human spirit. There is a Mahatma Ghandi quote on Shawn’s website that sums this spirit up perfectly:

“Strength does not come from physical capacity. It comes from an indomitable will.”

For more information on Shawn and her amazing effort check out her website; http://www.shawncheshire.org/index.html

This video also tells part of the story: _Build/_ABlindOdyssey/ChoosingToSeeTeaser.mp4

Anyway, back to the Trans Am Cyclery:

It was a really pleasant hour and a bit, chatting away to Wayne, Holly and an east bound touring cyclist, Bob Jacobson. A lovely bloke who had plenty of Kentucky dog avoidance tips. As he was spruiking, I grabbed a can of dog spray from the shelves and placed it on the counter so I wouldn’t forget it. I don’t think I have met a more laid back cross country cyclist – he really was taking it easy, smelling the roses and soaking up the experience. I wonder how he ended up? (I’ve got his cell number, I’m going to use this an opportunity to reach out).

It was just nice to have a proper chat with actual people….. for the first time in weeks. All while my bike was being brought back to life and while Wayne photographed and videod proceedings.

Oh, and the service from the good folks at Trans Am Cyclery gets 5 stars. (and yes, my package of goodies had arrived, including a note from my boys which brought a tear to my eye). Friday June 25, 2021. Back to an earlier tradition of bike leaning up against hotel room, photo. Friday June 25, 2021. A note from my boys was in the package of parts that my wife posted to the bike shop. I was back on route at around 11:30am and then stopped briefly at a gas station on the outskirts of Farmington for a quick bite to eat and to top up supplies. Brevity was key as there seemed to be quite the storm brewing and I was dead keen to get out in front of it.

Just like the stretch out of Pueblo, Colorado I somehow managed to outrun the storm / rather it outrun me in a different direction, although for the purposes of retelling the story I will stick to the former version. I did get quite the light show though, lightening striking seemingly all around me, plenty of wind and a little rain here and there.

The terrain around here is rolling and then all of a sudden a couple of sharpish descents down onto a wide open plain, a vast expanse of flat, multi-crop agricultural land. The Mississippi River Valley. The dramatic change in scenery was quite a jolt to the senses. The sights, sounds and smells were very different to that I’d pedaled through over the last few days.

And then all of a sudden I was rolling across a bridge, over the mighty Mississippi River into Illinois. 7 states down, 3 to go!

A quick stop for the essential State Line snap and then up a very steep ramp into the town of Chester, the birth place of Popeye creator, cartoonist E. C. Segar. Spinach was the last thing on my mind however. I was after something a little more……..cold and calorific. I spied the local Casey’s and pedaled straight there. Friday June 25, 2021. Heading out of Farmington, Missouri. Racing a storm. Friday June 25, 2021. The view down into the Mississippi Valley. Friday June 25, 2021. Across the Mississippi River into Illinois. The next 30ks to Campbell Hill was tough. It was hot but it was the humidity that was really knocking me about. Early 30’s Celsius and 80%  plus humidity is my kryptonite. As debilitating as the 40+ degree Celsius days of Wyoming. Probably more so.

Even though I hadn’t even been on the go for 90 minutes I pulled up at a gas station (not a Casey’s on this occasion) for cold everything. I even contemplated a bag full of ice to stick my head in. With my cold everything I walked my bike to the adjacent church grounds and just lay there in the shade for a while…. Back into the late afternoon furnace for an hour or so before the sun began to set and the dusk conditions became a little more cycling friendly. Into the town of Murphysboro, where I got waylaid again, as I had in 2017. Some things never change, although my off route dalliance was nowhere near as bad as my effort of 4 years ago.

A Garmin GPX file anomaly in the hood perhaps?

1.5 hours later I was pulling up to my hastily arranged accommodation in Carbondale, a student hotel for the Southern Illinois University.