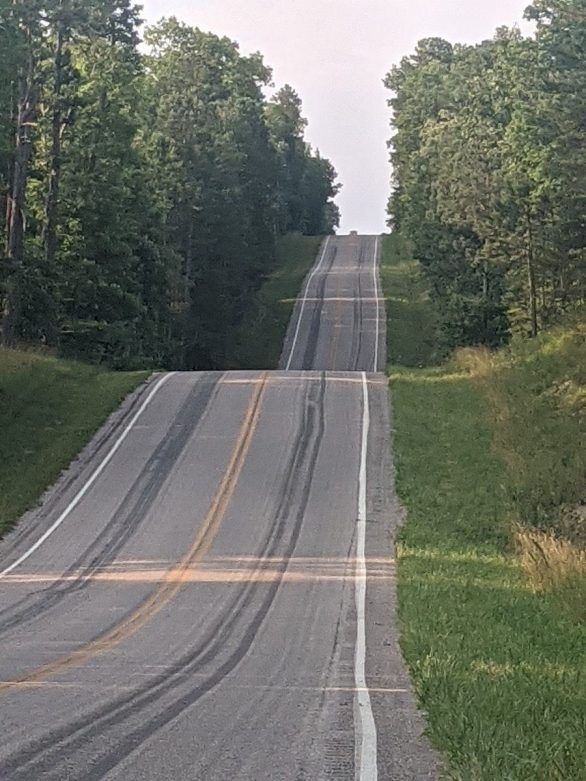 Thursday June 24, 2021: Yesterday had hurt on quite a few levels so I was determined to be a tad kinder to myself today. That started with ensuring that I stuck around for the hotel breakfast which started at 6am, and ended (pun intended) with my first liberal application of “Boudreaux’s Butt Paste” My rear “end” had been tender for many days and my only action to date was to complain about it which surprisingly enough wasn’t fixing the problem. It was well and truly time to show a rather important body part, particularly in the context of riding a bike, some tender loving care.

As I mentioned in a previous post I’ve never had an issue with saddle sores and thus never needed to apply any lotions or potions to my backside……..suffice to say I was still giggling to myself at the breakfast table a little while later.

I lingered over breakfast chatting away to a touring cyclist and perusing social media. On the race Facebook page I discovered that Kraig Pauli had won the race, finishing in Yorktown yesterday afternoon in a time of 17 days, 8 hours and 20 minutes. As far as the racing aspect of this adventure was concerned, pretty much all my attention had been on my position in the field and the racers around me. I had been keeping a cursory eye on the pointy end, though. From only a couple of days in it had been a 2 horse race between Kraig and Trans Am legend Evan Deutsch, with Kraig pulling away at the end, for his first win.

An extraordinary effort……….no, let me restate that, a fucking ridiculously insane effort.

And here I was in a hotel breakfast buffet in Marshfield, Missouri, spilling porridge down my front, with a greasy bum, chatting to randoms in order to avoid the inevitable, still 2,295 kilometres from Yorktown. I was averaging 248 kilometres per day while Kraig had averaged 388 kilometres.

It really does blow the mind.

Chapeau Kraigy boy!! T’was an honour to share the road (well, sort of) with you legends up front! Thursday June 24, 2021. The first sit down breakfast in quite the while. Marshfield, Missouri. On the road at 6:59am, my attention immediately on my freshly tuned derriere……..mmmmm, too early to tell.

I made relatively light work of the 45ks to Hartville, arriving just after 9am. Despite plenty of up and down the route trended downhill the whole way. I stopped at the only gas station in town to top up supplies. I was still digesting breakfast and still had plenty of stuff on board but it was another 60ks to Houston and I was absolutely determined not to stumble into any calorie or water deficits today.

I knew for a fact that there would be no Mexican food trucks to come to the rescue.

From Hartville, across the Gasconade River on State Highway 38 things get quite remote and a little rough around the edges. You get the feeling that the people out here prefer self sufficiency and to be left well alone. Plenty of wildly barking dogs to motivate expedient forward progress.

It is a tough section but I was grateful to be doing it during daylight hours. In 2017 I had pedaled through late at night which was a little sketchy.

I finally rolled into Houston just after midday and headed straight for the Casey’s Gas Station and Convenience store. Casey’s are a chain of convenience stores that operate in the mid west and the south, the 3rd largest convenience store chain in the United States (after 7-Eleven and Circle K) and the largest that is wholly American-owned.

They do a pretty mean Pizza slice.

It was great to be back in Casey’s country. At the checkout with my armful of supplies I considered very seriously signing up for a rewards card as I knew that I would be hitting the chain hard over the next few days.

Out the front I ate up my pizza slices and ice-cream, chatting away to some good ole’ boys who were working their way through 15 minutes worth of scratch and win lottery cards in their beat up pickup truck. Thursday June 24, 2021. A section between Marshfield and Hartville, Missouri. Thursday June 24, 2021. A section between Marshfield and Hartville, Missouri. Take 2. It was a 60 minute stop, involving a lot of eating. I had my appetite back which was a very good sign.

I knew what coming and had a visceral understanding that every calorie would count. The easier they went down, the better!

From Houston, through rolling farmland and then the trees all of sudden closed in ominously around me. I was pedaling into the forest, a forest that would be my companion for the next 24 hours. State Highway 106, as did the Congo River in Joseph Conrad’s classic was delivering me into the Heart of Darkness.

What would I find in there?

First up, a nice little teaser before the town of Summerville, where despite being on the road for 90 minutes or so since Houston, I stopped again to top up all supplies. I was taking no chances. The humidity was ramping up as were the lumps and by the time I made it to Eminence just after 4:30pm after another 90 minute stint I was almost out of water. I was blowing pretty hard too and needed a break. I pulled up at a rafting shop that had a bench out the front and plonked myself down, to catch my breath before surveying my options.

In direct contrast to the neighboring Summerville, Eminence is very much on the tourist circuit and a little more ‘not from around here friendly’. I was now in the Ozark National Scenic Riverways, a recreational unit of the National Park Service which attracts 2 million visitors a year. There is plenty to do in the hood according to Wikipedia; kayaking, rafting, tubing, boating, horse-riding, hunting, fishing, camping, cave touring etc.

No mention of road cycling though………..I wonder why?

I just sat there for a while, drying out – I was soaked through with sweat. I then went inside and bought a couple of Cokes, ice-creams and plenty of cold water.

Ok, so what is tonight’s destination?

Another 22ks to Centreville.

Both one hotel towns according to my route notes.

It was now after 5pm. Knowing what was coming that 40s could take 3+ hours so I settled on Ellington. I rang the hotel and booked a room.

“I got no idea what time I will be there but it’ll definitely be after 7pm.”

“Ok, no worries. I probably will have closed up the office by then. Just call me when you arrive”. The next 44ks to Ellington did not disappoint. 2.5 hours of really hard slog. In hindsight probably the toughest section of the Ozarks.

The pictures tell the story…… I rolled into Ellington around a quarter to 8 and then sensibly made my way to the local supermarket to buy supplies for the next morning. I then rang the hotel owner….

“ok cool. What are you gonna do for dinner? I’m at the Mexican restaurant opposite the hotel getting take out. Why don’t I meet you there and you can get your room key?”

I pedaled on over, got my room key and treated myself to an oh so satisfying meal and a couple of beers.

A tough but satisfying day! The Day According to Strava: