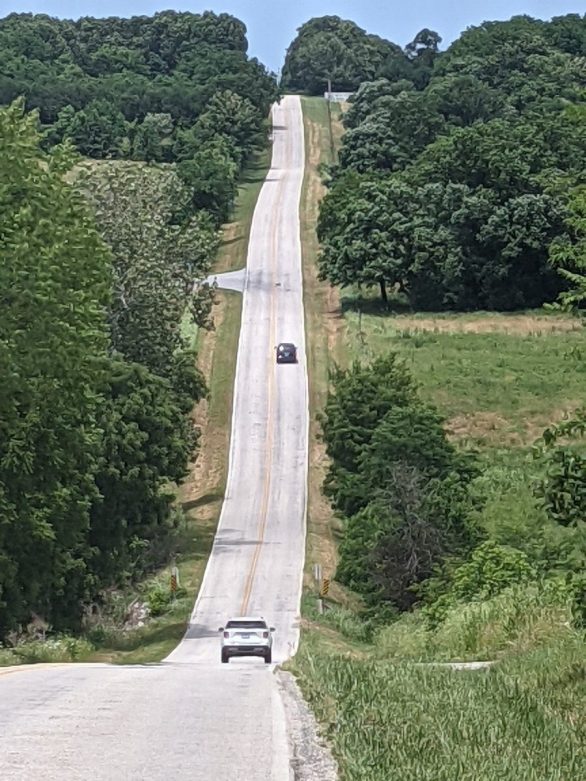 Wednesday June 23, 2021: On the road at 6:47am. My starting times were starting to slip. An absolute necessity given my later finishing times over the last couple of days but starting in bright sunshine felt a little unnerving – like I was already behind schedule. 55 days of ultra racing to date and I can now officially announce that my “perfect” racing days involves a pre dawn start. In my mind there is a little extra inspiration and motivation to be gained by getting out amongst it while pretty much everyone else sleeps. Seeing the sunrise and then banging out 150+ kilometres before lunch feels good and seamlessly sets up a big day.

So yes, I was a little behind the eight ball this morning. A later than optimal start but I was also feeling the effects of a 3 big days in the saddle, over which I had smashed out just under a thousand kilometres. Huge by my standards. I don’t have too many 300+ days to my name, let along 3 in a row. I was physically tired from the effort but I was also conscious that the productivity had been aided by big boy friendly terrain. Kansas ain’t hilly. Windy maybe but hilly absolutely not. Particularly not the section that the Trans Am route traverses. With the looming Ozarks I had a real sense that the honeymoon was now over.

I pulled into the gas station opposite my hotel for breakfast and supplies and then headed off down the busy main drag of Pittsburg. Left turn onto East 4th Street which became State Highway 126 and half an hour later the first photo opp of the days play……The Missouri State Line. The first big decision of the day was whether I should stop at the Trans Am institution, Cooky’s Cafe in Golden City for a slice of pie. I was torn….be kind to myself and indulge in some of the best homemade pie on the planet (memories of the gastronomic glory of the Dutch Strawberry Rhubarb consumed 4 years ago still top of mind), or self flagellate and soldier on?

Stupidly I chose the later option. I had put a 100k dent into Wades 155k lead over the last 2 days and was keen to keep pounding. As I mentioned, motivation and energy were at a low ebb……I needed something to stoke the fire.

I was barely out of Golden City when the realization that I’d make the wrong call hit me……hard. Chasing down the next competitor was a noble idea but it was becoming glaringly obvious that I simply didn’t have it today. I was also running low on food and water which made the decision  to roll on fucking ridiculous. However, I literally couldn’t make myself turn around and retrace my steps.

55ks to the next services in Ash Grove.

….and the rollercoaster ride of the Ozarks is just about to commence!

I was lucky however, very lucky. Still 35ks from Ashgrove, on a stretch of road that hosted multiple tractor and farm machinery dealerships I came across a Mexican Food Truck. Wednesday June 23, 2021. The stretch just past the Missouri State line. My 40 minute stop served multiple purposes, one being the place where I punched my ticket to The Rollercoaster Ride, as literally a kilometre down the road the fun and games began…..

Those magnificent men
In their bicycle machines
They go up-tiddly-up-up
They go down-tiddly-down-down.

4 years ago I had been on form and able to attack these ridiculous undulations……not so much today. The next 35ks to Ashgrove were a real battle, taking almost 2 hours. I’d read in the race Facebook page that Ashgrove was the place where racers could pick up a Trans Am commemorative medallion. They were hidden somewhere in town and there were detailed instructions to find them but I just could not be arsed. Upon rolling into town I simply found a patch of grass near the carpark of a long deserted gas station and plonked myself down for a breather. Out of Ashgrove now, heading north, past the Nathan and Olive Boone Homestead State Historic Site. Yep, I was now in Boone country. Nathan Boone country, the youngest son of American pioneer, frontiersman and folk hero, Daniel Boone. Nathan, who lived in Ashgrove for 20 years before his death in 1856, was a frontier surveyor, trapper, hunter and soldier. He did for Missouri something similar to what his more famous old man had done for Kentucky.

….and then of course some more up-tiddly-up-up and down-tiddly-down-down, before a resupply in Walnut Grove. I also ducked into the Walnut Grove Post Office to post home some superfluous gear, aka a desperate attempt to jettison some weight before the Ozarks got really funky. Another 40 minutes off the bike in Walnut Grove. It was now 3pm and I had only banked 125ks. I was struggling but I felt like I should be able to make it to Hartville 100ks down the road (or should I say up and down the road) where I knew there was a place to camp.

Loaded up with supplies I battle on for another 2.5 hours. My wife rang. It was so bloody good to hear her voice…….well actually it is always good to hear her voice but on this occasion it was even more so. I was really at a low ebb and may have even shed a tear due to how fucking hard I was finding things. The lethargy, the lumps, the heat and the humidity which was all of a sudden an issue after a week of the dry interior, were crushing me. I just listened to her voice, barely managing a grunt in response.

“Sorry gorgeous, I’m going to have to call you back. I’ve just fallen off my fucking bike!”

I’ve had many a phone conversation (via headphones) whilst riding my bike, but on this occasion the dual task was quite obviously beyond me. The road design did however play its part although to be fair that perhaps should have precluded the phone conversation in the first place. Long story short the road was slightly raised, about 2 inches or so above the adjoining gravel and as there was no road shoulder, additional concentration was required therefore to ride the “tightrope”. Being on the phone and gazing out at the hay in the fields waylaid said concentration and I rolled off the road onto the gravel. In the process of trying to get back up and on the road surface my front wheel hit the raised road at the wrong angle and bang, I go down like a sack of shit, left shoulder, elbow and knee leading the way.

I was not moving fast thank goodness as I was pedaling up hill but it did mean my little “moment” was witnessed by about 5 cars who were behind me patiently waiting for a chance to overtake. Nigh on a year later I doubt they would have forgotten the chaotic scene. Hairy, pink MAMIL laying prostrate on the road with his bike on top of him, Skittles and Peanut M&Ms flying in all directions.

It took a few moments to disentangle myself and get the fuck off the road. No “Are you ok’s” from the recently unencumbered traffic but I really was not in the mood for any chit chat. I was furious at myself for letting it all happen. It could have been so much worse. The only damage done was a bit of skin taken off my knee and elbow and bent handlebars which were easily enough bent back into a close approximation of how they were.

I decided right then and there that I would call it a day at the next town. I was very obviously not up to riding all the way to Hartville. My tiredness was affecting my concentration which was affecting my safety.

I sat by the side of the road for a little while, gathering myself before gingerly pedaling the next 15ks to Marshfied. 1st port of call the worlds largest Walmart for medical supplies (plaster for my abrasions and something for the saddle sores I’d been ignoring) and food/drink. 2nd port, the Holiday Inn to rack up some more rewards points.

A short day but on this occasion I literally did leave it all out on the road.