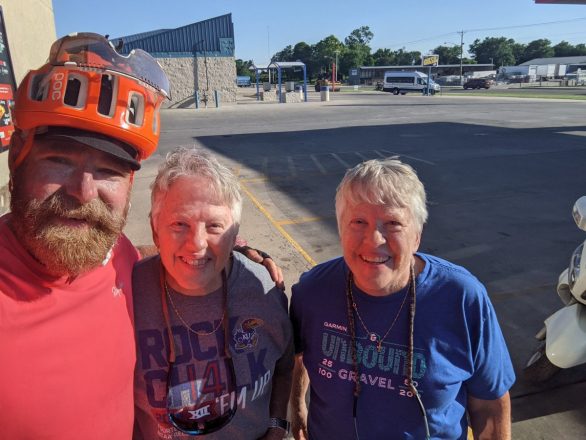 Tuesday June 22, 2021: Given the late finish the previous night I gave myself a little reprieve and set my alarm for the more civilised time of 5:30am. Surprisingly I answered the call with the minimum of hesitation before proceeding to hobble around the hotel room, packing up, slurping left over cold pot noodles and inserting myself into wet (from last nights shower / laundry) bib shorts. The latter introducing me to the day in quite the succinct manner – more succinct even than the strongest of strong coffees.

Oh yeah baby…….this is the life!

I push my bike out into the corridor by its saddle and quickly follow, bracing my shoulder against the heavy hotel room door to ensure it doesn’t close on my precious means of transport, damaging it or God forbid its delicate and oh so bloody important rear derailleur. It is a daily dance that fails to get more coordinated with practice. The subconscious risk averted, I now proceed to walk the corridor, the whirring sound of my rear hub, as the clip clopping of metal studded rugby boots on concrete did back in the day, signaling the transition from locker room to field of play. The field of play on this occasion being the roads of Eastern Kansas.

(No more pretentions wordsmithing I promise……..just mucking around).

It was still well before the hotels scheduled breakfast service but as I made my way past reception I noticed that there were pastries, fresh fruit, juice and coffee already available.

As if in a frenzy I chugged a few glasses of juice, drank a coffee as quickly as I dared and jammed a couple of pastries down my throat. I then grabbed as many pastries as I could carry and a banana and stuffed it all into my bike bags.

The breakfast of champions consumed I could now get out amongst it and not have to worry about an early gas station stop. I had supplies now to last me for quite the while.

It was a beautifully clear morning, a slight coolness to the air that would not last for long. The ball of fire steadily rising in front of me to the east. It was going to be a hot one. A little backtracking to get back on route and then the standard Kansas road configuration, long dead straight stretches.

The next 30ks with a slight kink in the middle.

The scenery was changing ever so subtlety though. Agriculture had morphed from wheat to corn to cattle. The flat expanse of the plains that I’d been rolling through for the last 3 and a half days was now more undulating. I even had to use the small ring up front to negotiate one hill. Warning signs that the rollercoaster ride of the Missouri Ozarks were very much in my short term future.

Left turn at the tiny hamlet of Rosalia onto the busy US Route 54, a stretch of road that the Trans Am trail shares with the Race Across America (RAAM) route for 60 kilometres. No RAAM team sightings though over the next 30ks to the town of Eureka, but I did pass a handful of west bound tourers battling the lumps out of Eureka on their heavily laden steeds.

A wave and my standard “Looking good…….Go get it!” as I flashed past.

Another Choc Shake on my mind I rolled up to the Sonic in Eureka just before midday. 120ks banked. Tuesday June 22, 2021. Not quite as inquisitive as their Coloradan cousins…. It ended up being quite a lengthy stop, 90 minutes off the bike. My appetite was still concerningly muted and it took a real effort to force the burger and fries down. Yet again the only items that hit the spot was the Coke and the Shake. I also had admin to take care of. Bike maintenance was very much on my mind, particularly with the Ozarks and Appalachians looming. Given the supply issues in the pandemic affected bike industry, and as I had found out first hand in Lander (Wyoming), parts availability was a real problem. Over the last week I had ordered a number of anticipated requirements online and had then sent to my home address in Philly; 2 x tubeless tyres, 2 x extended length valve stems and a 12 speed SRAM chain. The items had all arrived or were due tomorrow so it was nigh on time to pick a bike shop up route and arrange for my wife to post all the above.

Quite the simple task on paper but excruciatingly difficult with an exhausted mind.

Out come my route notes. Ok, so there are 3 good bikes shops on or close to the route over the next 850ks and then nothing for the next 1,500ks by which time a bike service would be way too late. The way I mash the gears I doubt my bike would last both the Ozarks and Appalachians.

There’s Tailwind Cyclists in Pittsburg, Kansas – too close. I’ll be there either tonight or tomorrow.

Trans Am Cyclery in Farmington, Missouri 690ks away – a definite option.

The Bike Surgeon in Carbondale, Illinois – 150ks further on. Also a definite option, particularly as I had a very good experience with them in 2017.

I then tried to work out when I’d be at either and whether that forecasted day/time conflicted with opening times, particularly Sunday when both would be closed.

It all became way too hard so I paper rocked it, the Trans Am Cyclery being the “winner.” I texted my wife the address and then rang the bike shop letting them know that there was a package forthcoming and I’d be popping in for a service Thursday through Saturday.

There was a sharp exhale of breath when it was all sorted!

A quick resupply also in Eureka and then finally back into it.

The next 100ks to Chanute was a real hard slog. I seemed to be stuck in a cloud of fatigue that I just couldn’t shake and on a couple of occasions simply had to get off the bike and take a nap.

I rolled into the large town of Chanute at around 6:30pm, keeping a keen eye out for dotwatcher extraordinaire, Corina Barclay Cox who I met in 2017. A lovely lady. No such luck however and wondering what had happened to the world famous Chanute welcome, made my way across to the Phillips 66 24 hour gas station where I had also stopped in 2017.

I didn’t have to wait long for that welcome though, although from an alternate source. As I was leaning up my bike 2 ladies, sisters, twins in fact came up to say hi. Susan and Sandy Stephens. They were recent fans of the Trans Am but long term supporters of ultra distance cycling and in particular the world famous gravel event, Unbound Gravel (previously named Dirty Kanza) which is held annually 140ks north of Chanute out of Emporia, Kansas.

They walked me into the gas station and announced to all and sundry:

“This is Mark Croker. He is racing his bike coast to coast across the country in the Trans America bike Race. He’s in 11th place.”

My sunburnt nose and cheeks took a turn for the crimson. Yep, rather embarrassing but at the same time it was a nice gesture. Speaking of nice gestures they insisted on paying for my supplies which was not a small amount of money. I had armfuls to satiate immediate requirements as well as to cover the next 90ks to Pittsburg.

We hang out and chatted in the seating area for a while before I took their leave. It was now pushing 7:30pm and there was a lot of riding to be done before I could call it a day. Tuesday June 22, 2021. With Susan and Sandy Stephens in Chanute, Kansas.

The 90k Chanute to Pittsburg stretch took around 4.5 hours. Some more long straight sections but more easily negotiated in the cooler conditions of evening. I finally rolled into town just before midnight, chucked a left onto the main street, Broadway Street and headed off route to the part of town where I knew there were plenty of hotel options. I chose the first one I came across.

I was cooked. I just ripped off my gear and fell into bed.