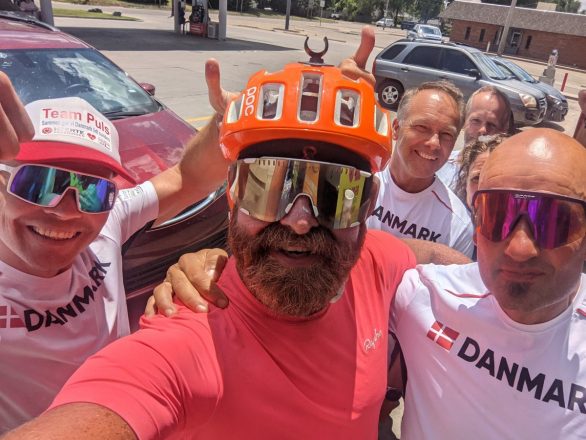 Monday June 21, 2021: Up at 3am and the lethargy hit me immediately. I felt like shit. Nothing specific outside the usual aches and tiredness but I had very obviously recovered particularly poorly. The pitter pater of rain on the tin roof outside my second floor hotel room didn’t bloody well help. I moped about for a while, aimlessly stuffing left over gas station crud in my mouth and packing up what I had failed to pack up yesterday evening.

Maybe Trackleaders could stoke the motivation?

Wade had put in a monster of an evening and was 155ks up the road in Larned. He must have finished very late last night and odds are won’t be out amongst it for quite a few hours. I’ll no doubt eat into his lead this morning but nowhere near enough to put fire in my belly.

Alan was 87ks behind me in Leoti and Sonny 25ks further back in Tribune.

Out the door just after 4am, out into the drizzly gloom. As I closed the front door of the Heritage Inn behind me I got a distinct “shit, I’ve forgotten something” feeling. It took me a while to work it out…….Bugger, I’ve left my food in the room! A banana and a couple of packets of my snacks du jour, lifesaver gummies and skittles.

I tried the door I had just closed but of course it had locked behind me.

At such a ridiculous hour I had no chance of getting anyone to let me back in. Well, I probably did but that would involve waking the whole damn hotel and a significant proportion of Main Street, Dighton.

Oh freakin’ well. I’d have to battle on sans snacks until the next town of Ness City, 50ks up the road.

Battle on is right. Low mood, lethargy, rain and a gusting cross wind made it a very tough 2.5 hour ride. Pretty sluggish going considering the road trended downhill the whole way. I finally pulled up to the 24 hour Conoco gas station on the far side of Ness City, hopeful that copious calories would bring me back on form. It was a 30 minute stop. Despite every fibre of my being screaming out for more time off the bike and maybe even a cheeky snooze under the gas station tables I forced myself to get back out into it. It was still before 7am but the day already had  “this is gonna be a hard one” written all over it. A day to be endured. A day to keep that upper lip as stiff as possible.

From Ness City, more struggle street to the next little town of Rush Center from where the route takes its first major change in direction since Pueblo, 500ks back, bringing my day and a half on State Route 96 to an end. I somehow missed the right turn. Not a big error, only about a kilometre wasted all up but it was a subtle indicator of my head just not being in the game.

30ks due south on US route 183 and then a left turn onto State Route 156 heading due east again towards Larned.

The weather had cleared and the sun was burning off the cloud cover but my mood remained foul. I just couldn’t seem to snap myself out of it. Plenty of vehicle traffic, particularly semi-trailers tweaked the old anxiety button too. I was pretty sure that this was the stretch of road that TC Cheng had been hit on during the 2018 race, 4 days after John Egbers, leaving him semi-paralysed for life. I winced at every passing car.

I just wanted to get off the damn road for a while, grab a descent meal and chill the foxtrot out. Larned could not come soon enough.

Further up the road, at a rest stop was a car parked up with 3 people waving.

Bloody hell, over halfway across the country and my first dot watcher sighting!

It was Denise Schafers and her 2 grandkids. They were cheering, waving pom poms and offering drinks. I pedaled up to them, said a very quick hello and in the dickiest of dick moves kept rolling on. I always try to stop and chat with these beautiful humans that support the race and come out on their own time to say hi but on this occasion, stuck in my own head and in a rush to get to Larned, I had forgotten my manners.

(I actually felt a tad guilty about this for a while, particularly as Denise had brought out her grandkids and all they got for their hours of waiting was an extremely brief sighting of a hairy, sweaty, brightly coloured fat bloke in a bad mood who grunted something at them before rudely pedaling off. Post race I replied to one of Denis’s Facebook posts, explaining myself.)

Anyway, 20 minutes later I was rolling into the relatively large town of Larned and made my way to the…………………..Sonic. All of a sudden I had one hell of a hankering for a Chocolate Shake. I spent an hour at the Sonic, resting, cooling down and force feeding myself. I had no appetite – always concerning given the glaringly obvious calorie deficit. The only thing that went down easily was the post-mix Coke and the Choc Shake.

Speaking of calories, I needed more on-bike supplies. The next services weren’t for another 100ks so I rolled across the road to the Kwik Shop gas station and convenience store. As I leant up my bike out the front I noticed a few people in white t-shirts sort of checking me out. I was in no mood to start any conversation so with head down ambled in to get what I needed.

When I came out the white T-shirts were checking out my bike.

Still in no mood for chit chat I started packing up before one of them, in a heavy European accent asked if I was doing the Trans Am.

I couldn’t ignore them now….

And I’m so glad I didn’t. Lovely people. They were a RAAM (Race Across America) team from Denmark. Their rider Henrik had been leading RAAM until being forced to scratch due to severe saddle sores. The team were in fine form but Henrik was still obviously devastated. The poor bloke! Such a massive effort just to get to the starting line – the months of training, qualifying and then the logistical nightmare of travelling during a global pandemic – they had to enter the US via somewhere in the Arab Emirates. To be leading one of the toughest bike races on the planet and to have it all come to an end on the plains of Kansas due to a sore bum. The bitterest of bitter pills to swallow.

They had a car full of supplies, cans of Coke, bars, gels, gummies etc and kindly offered that I take what I needed. Mmmmm maybe I should have indulged the conversation before I entered the convenience store. My bike was now packed to the brim. I graciously accepted a couple of cans of Coke and jammed them into the pockets of my bib shorts.

A quick selfie with these Danish legends and then back into it. I had been off the bike for way too long. My time with the Danes had definitely lifted my spirits. I needed that extra pep as the next 95ks to Nickerson was close to the toughest section of my race to date, including the misery of the first few days. 6.5 hours of mind-numbing monotony. Tedious scenery and a long straight road that I never thought would end. And a stiff cross wind to boot.

There was a silver lining to this tale of woe however. About 65ks from Larned was a biker rest stop out the front of a house. I membered it from 4 years ago but I didn’t need it then as much as I needed it today. Nowhere near it! I was really struggling. Dehydrated. Low on water. Feet killing me – blisters were starting to be a real problem. The spot was a bona fide oasis. A cooler box full to the brim with ice and bottles of water, a little chair set up in the shade. The sheer kindness of the offering brought a tear to my eye.

I took my shoes off and doused my blister with ice and just sat back basking in the sheer bliss of the moment, my body temperature steadily reducing to something approaching normal.

Suitably revived I resumed my battle with the days riding and about 75 minutes later rolled into the town of Nickerson at around 6pm. 250ks under the belt. Monday June 21, 2021. The Oasis. Somewhere between Larned and Nickerson, Kansas.

I resupplied at a gas station in Nickerson and spent a good 30-40 minutes sitting against a wall in the car park in the shade, forcing calories into me and doing my best to fire myself up for the next 80k stint to Newton. There was no “Oasis in the Grass Desert”, ie the Newton Bike shop and hostel to shoot for these days due to it unfortunately closing. The Holiday Inn, which I had been racking up rewards points for would have to suffice.

The next 80ks to Newton were actually……….enjoyable. Yep, I finally came good. A couple of dotwatchers (I’m afraid I can’t recall their names) came out to say hi. They said they wanted to welcome me to Kansas. It meant a lot and definitely buoyed my mood. The Kansan hospitality was definitely on full display today.

I rode hard to Newton, whooping and hollering at the most beautiful of sun sets. The sights, sounds and smells of wheat harvesting season in full swing.

Tired and fully satisfied with my efforts I finally rolled into my hotel on the far side of Newton at around 10:30pm. I had completely forgotten about dinner but the hotel had pot noodles and tinned spaghetti on hand, a meal of which surprisingly hit the spot.