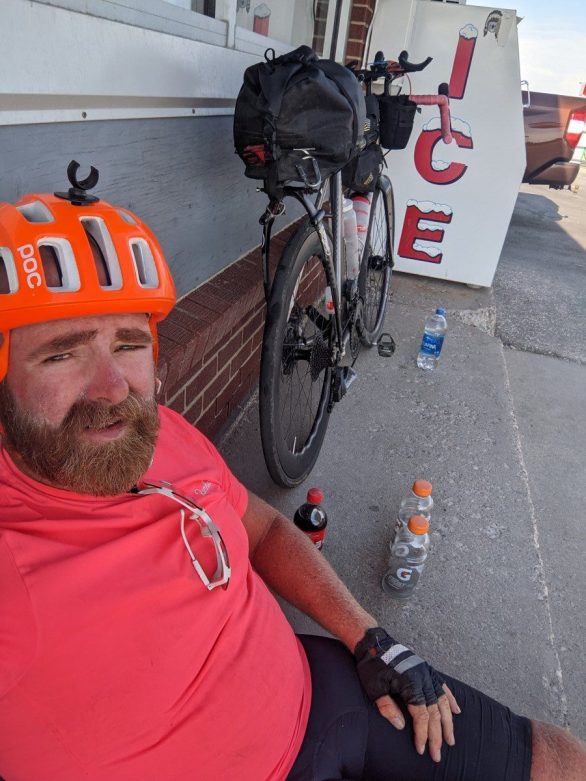 Wednesday June 16, 2021: Given my abbreviated day yesterday I had set my alarm for stupid o’clock. I was desperate to make up for the lost time and to also get a jump on the forecasted heat which was predicted to be north of 100 Fahrenheit for the 3rd day in a row – a record for this part of the world.  However, upon the arrival of stupid o’clock said alarm was met by a curt “get fucked!” as were subsequent renditions. I just couldn’t face the day just yet. My “sleep” had been plagued by negative thoughts; pangs of regret for the “unnecessary” maintenance stop and worry that my race was at risk now that I had a chain that was incompatible with my cassette.

So, instead of going back to sleep I ruminated on all my perceived inconveniences for a while longer before finally dragging my sorry arse out of bed at around 5am. I then sluggishly commenced to pack up all the gear that I had left strewn across the hotel room floor while avoiding a succession of phone calls, no doubt from people keen to understand why the bloody hell my dot had been parked in Lander for over 14 hours.

All this in the context of being shit scared of the next part of the route and in particular the southerly wind that could render bike riding almost impossible. In yesterdays report I mentioned the wind storms that had played havoc during the 2017 race. On the section to Lander they had been ferocious yet temporary, however the wind that plagued the next days riding from Lander had resulted in over 6 hours of pure misery before I too shelter with another racer, JJ Simon in a shed at Three Forks.

The glass was definitely half empty this morn.

Anyway, despite all this “woe is me”, with gritted teeth I eventually exited my hotel room and rolled across Main Street to a gas station for breakfast and supplies.

Here is a list of notable daily record high temperatures that have been broken so far this week. Many other records have been set and more are likely today through the beginning of the weekend across the Central Plains and Southwest. #HeatWave 🥵 pic.twitter.com/THxA0cXw74

Fully loaded now it was finally time to put Lander behind me and to make some tracks. I pedaled out of town gingerly, keeping a hypervigilant ear and eye out for how my bike was operating. So far so good with the chain thank goodness! A succession of gear changes had delivered the chain to its required cog with only the very minimal of slippage. The relief was palpable.

My attention turned to the rear tyre, now a 28mm tubed Pirelli vs the replaced 35mm tubeless Schwalbe. Definitely less perceived comfort with the higher pressure and less surface area but fuck it, I was rolling.

But not for long.

18 minutes into the day I got a flat……in the rear tyre……I shit you not.

I pulled to the side of the road, walked up the embankment a little to some flattish ground and commenced the operation. My first move was a resounding fail. I completely forgot about my filled to the brim (with gummies, m&ms and skittles) feedbags and so when I flipped my bike to ease access to the rear wheel said contents of the feedbags went flying. A multicoloured hail storm cascading down upon the embankment.

Oh Mr Hart what a mess! (non Australians will have to Google it)

As I clambered around on my hands and knees wrestling the precious calories from the gathering ants my phone rang. It was my Dad. I thought about it but decency prevailed and I answered it…

“I’m trying to fix a flat mate. I’ll have to call you back!”

(I may well have used alternate phraseology and language).

Anyway, enough detail of my ineptitudes. It took me an hour but I finally got it all done and with significant relief resumed forward progress out into the Wyoming Basin.

Within an hour though it became obvious that I had done a pretty shit job with the road side repair. The rear tyre was rolling but now had a slow leak. I just couldn’t face another hour fart-arsing about (may also require a Google) trying to fix it properly so I battled on, stopping to pump it up every hour or so. A massive inconvenience but it afforded a photo opportunity at each stop which I otherwise wouldn’t have been in the mood for. At around 10:30am I finally made it to the oasis of the Sweetwater Station rest area. I don’t use the term oasis lightly – I was pretty much out of water and the heat of the day was starting to kick in. Not quite the palm tree lined pond of lore but pretty damn close. Green grass, shade, picnic tables and a really well maintained and appointed bathroom block that had a cold water fountain, which I made very good use of. I then lay out the front on the grass in the shade letting the water that I had doused myself with evaporate, bringing down my body to something approaching normal.

It was a short but very sweet rest stop. The southerly breeze had already showed itself but had not yet stiffened to anything approaching the levels I knew it could get to, and so I was keen to make as unhindered progress as possible while I could. I re-pumped the rear tyre, re-topped my water bottles and stuck my head under the water fountain for one last glorious time before hitting the road.

On my first Trans Am in 2017 I had been completely ignorant as to the modern history of the places and landscapes I was riding through. I was determined to rectify that wrong on my second crossing of the US – you may have noticed that I’ve sprinkled a little Lewis and Clarke, Oregon Trail and Native American references here and there in my race reports. I am particularly taken with the spirit of adventure that the westward expansion of this great country involved, as I am with that of my native Australia.

A lot of the landscapes that I have been experiencing, through eastern Oregon, Idaho, Montana and Wyoming have barely changed since those times and it is not hard to imagine the wonder that those early pioneers must have felt. As they made their way west they also must have pondered:

“How the bloody hell are we gonna get our wagons over those damn mountains!?”

In fact, they didn’t have to. There is a large gap in the Rocky Mountains, the Great Divide Basin, which I was riding adjacent to now, through which they travelled. The pressing issue of the time was fresh water, henceforth why the Oregon Trail followed the Sweetwater River north of the Great Divide Basin and the Overland Trail (another westward wagon route) travelled south of it, in order to avoid the incredibly arid conditions and salinated water of the vast basin.

Back into it. Very tough going. The heat climbed, the southerly picked up (not bad but enough to slow progress) and the God awful soft tar (some kind of sticky, rubbery substance) filled tracks on the shoulder of the road, just about the width of a bike tyre, had me howling with frustration.

Whad up with that!

It was a case of more teeth grinding effort, counting of telegraph poles as they slowly passed and lurching between the tracks. All this punctuated by a stop every 45 minutes to an hour in order to pump up the rear tyre. I contemplated a stop at the ex Uranium mining boom town, now pretty much ghost town of Jeffrey city but instead soldiered on to the gas station in the tiny community of Three Forks, which I finally rolled up to just before 2pm. Wednesday June 16, 2021. The view down to Three Forks. I think a similar view has graced an early Trans Am Bike Race online poster. Wednesday June 16, 2021. My tiny slither of shade out the front of the gas station at Three Forks. I spent about an hour perched on a little stool that the clerk used for his cigarette breaks, in a thin strip of shade out the front of the eclectic gas station trying to revive myself with a variety of cold drinks. I watched a steady succession of road trippers as they rolled through to fuel up, this being the only gas station for miles and miles in any of the 3 directions of this intersection of US Route 287 and State Highway 220 – hence the name of the place, Three Forks.

It took all the motivation I could muster to get back on the bike. I had been keeping a cursory eye on Trackleaders and Hunter was only 10ks behind me but racing was the last thing on my mind. I just wanted to get this next nasty 70k section to Rawlins over and done with.

The less said about the stretch to Rawlins the better. Suffice is to say it was as expected……nasty. Three and a half hours of nasty. The last half an hour with no water. I literally had to continually swallow and swirl my tongue around in my mouth to maintain some semblance of moisture in my mouth. T’was rather uncomfortable.

I finally made it to Rawlins and made a beeline to the nearest gas station on route, which frustratingly was on the far side of town.

“Tough day to be out riding!” said a bloke paying for his gas.

“You’re not fucking wrong mate…….woops….pardon my French”, I quickly apologised as there was a young family within earshot – what a heathen!

Turns out the bloke had been working the road works on the other side of town where I had ridden through earlier. He told me he had taken some temperature readings to access working conditions. Air temperature was 107 Fahrenheit and road temperature was 120 Fahrenheit.

I sat out the front of the gas station knocking back Gatorade, Coke, water and ice-cream. It was only 6pm but I was cooked and done for the day. I booked a room nearby and then pedaled over to it.