The 2016 Gran Fondo New York is just 4 days away. It will be the second time I have done the race, having first completed the course in 2014. That year was just about finishing the race but this year having done a shedload more training I actually want to have a crack and set a decent time. But before I nail my colors to the mast I thought I’d have a closer look at the course to see what a realistic time is. By my current standards anyway.

Lets work backwards from my 2014 result: 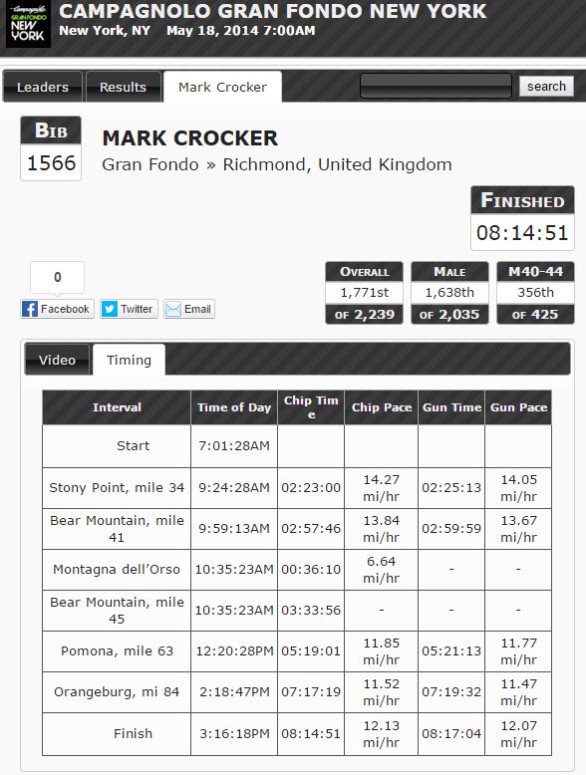 In May 2014 I had just moved with my family to Philadelphia, US from London, UK  and so with all the planning, farewell partying, packing and unpacking I hadn’t done anywhere near as much training as I would have liked. I was looking at the event more as providing a well needed kick up the backside to start my training for the 2014 Etape du Tour which was a couple of short months away. Just finishing and getting a long ride in the legs was the name of the game…

Happy just to finish the 2014 Gran Fondo New York…..although I don’t look it in this photo.

But by how much?

Lets have a closer look at the course profile:

I have divided the course into 3 sections. The plan will be to refill my water bottles and perhaps grab a bite to eat at the respective aid stations at the end of each section. Namely after sections 1 and 2 as all I’ll be grabbing after section 3 is a beer and a patch of grass to plonk my arse.

Given my analysis above combined with anticipated stoppage times of 20 minutes (10 minutes each at the aid stations at the end of sections 1 and 2)  my goal for the 2016 Gran Fondo New York is 6 hours and 8 minutes. This would be a massive improvement vs 2014 of over 2 hours!!