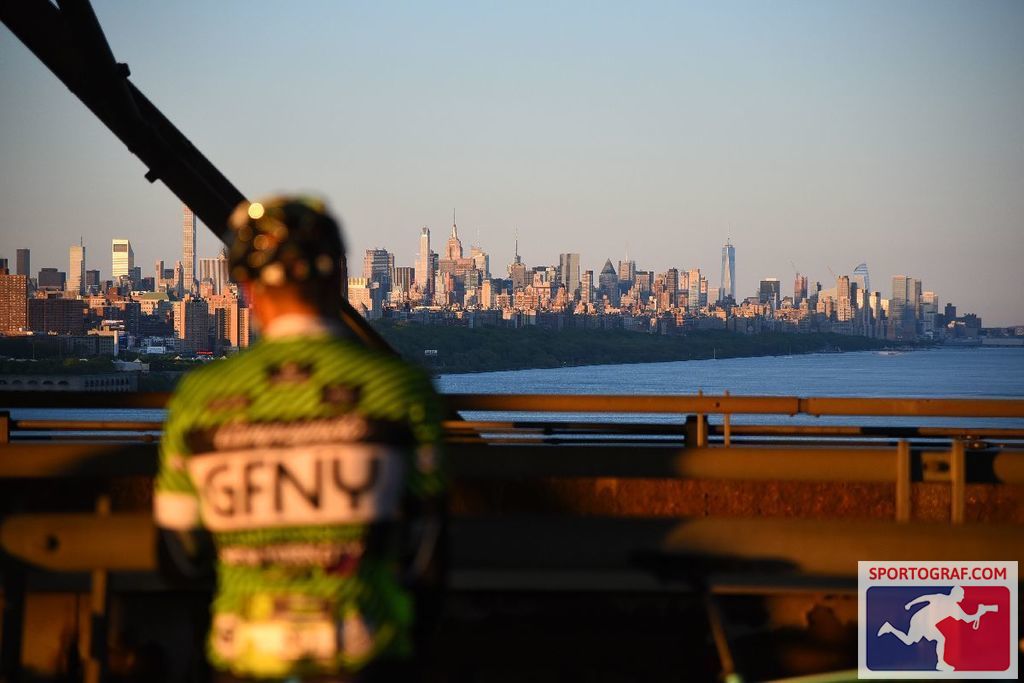 This was my second attempt at the Gran Fondo New York having first completed the 100 mile (160km) race in 2014. It was my 6th Sportive yet the first one where I had actually gone into the event with a competitive mindset. I was after a decent time rather than being satisfied with just finishing. My goal time was rather ambitious……….but the question is, was it realistic?!

My 2014 time was 8 hours 14 minutes and in an earlier post; My Plan for a Massive PB in the 2016 Gran Fondo New York I outline a plan for a time of 6 hours and 8 minutes. I was so confident that I even queued up at the pre race day expo for a photo of my cocky self and said predicted time: (I rounded up to 6 hours 15 minutes) But before I compare ambition to reality here’s a bit of an overview of race day:

Race morning for me started at 3:30am when the hotel wake up call did its job and jolted me from a fitful sleep. I love my sleep and am usually very good at it but I can never fully relax the night before a race. I reckon I would have got around 4 decent hours sleep which was far less than I had planned. No grounds for complaint however as I would have got even less if Melissa and the 2 lads had been with me, crammed into a hotel room.

This year I was staying in one of the suggested hotels on the New Jersey side of the Hudson River at Fort Lee, so instead of mucking it on the subway as I’d done in 2014 from a hotel on 42nd street…. On the A train heading to 168th street station with those heading home from a night out and a few steadfast cyclists. A fight broke out right in front of me just after I took this shot. (may 18, 2014)

….I joined a police escort from the hotel to the George Washington Bridge, from where we could all cycle across to the start on the Manhattan side.

The view from the bridge at that time of the morning was quite spectacular: I then headed to my starting pen of fellow old fart 40 to 44 year olds: Where I settled in for the long and chilly 90 minute wait to the starting gun. But not before I snapped my traditional starting line selfie: And then at 7:00am sharp after a rousing rendition of the Star Spangled Banner all approximately 5,000 cyclists from 93 countries engaged feet to pedals and the race was on….Giddyup! The race is on!

In the post; My Plan for a Massive PB in the 2016 Gran Fondo New York I divided the course into 3 sections with goal times for each, so I’ll do the same here, comparing goal time to actual time.

This first section I really noticed in how much better condition I was than 2014. I was actually able for the first time ever, grab a hold of a peloton, get sucked along for a while and then surge ahead to grab the next peloton…and then repeat. This was proper racing and a shedload of fun! There were times that I was mid peloton surrounded by proper cyclists, free wheeling at 4okm/hr where I just wanted to scream out “your little ripper!”…but thought better of it lest I give away my inexperience.

A tough ole’ section to be sure that included a majority of the days climbing.

Now one’s ability to climb hills on a bike is directly related to 1 metric, that being power to weight ratio. The lighter you are the easier the effort (ie the less the power) required to climb a hill. Now, although my power had definitely improved through training my weight was still nudging 100kg (220lbs), and didn’t I feel every kg on this next section.

Bear Mountain was a shedload easier than 2014, in fact I beat my time up it by 7 minutes……but the next few hills after Bear mountain really hurt.

Actual time = 3 hours which also included fixing a flat tyre which I got just after the Bear Mountain decent. Cruising up Bear Mountain….plenty of energy to flip the Peace sign.

I was shagged after the previous section….very low energy. In fact I don’t think I had been eating enough on the bike….Thats my excuse and I’m sticking to it!

I well and truly rectified that situation at the next rest stop where I absolutely annihilated 3 packets of cheddar flavored crackers and washed them down with a few plastic cups of warm Coke. I also stocked up on a couple of gels to get me to the finish line.

This 3rd section was pretty similar terrain to the first albeit at tad more lumpy. My effort was solid and although the field had well and truly thinned out there were still a few mini pelotons to jump onto.

But then the final hill happened….totally unexpected as it wasn’t part of the 2014 course. It hurt…a lot! No chance of a final push to the finish, it was just a matter of grinding away in the easiest gear. My finishing time was 6 hours 55 minutes. Yep a bit of a blow out from my cheeky prediction of 6 hours and 8 minutes but I did achieve a softer goal of finishing in the top half of the field and my age group. Besides I now have extra motivation to smash it next year!

My cognitive abilities are always slightly impaired after these races but regardless of my state of salt encrusted exhaustion I can still read and comprehend signs: