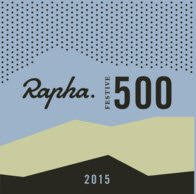 9 Lessons Learned From Completing the 2015 Festive 500

I am a long time user of Strava, a relatively recent adopter of Rapha clobber and a serial slob in the week between Christmas and New Year, so when I stumbled over the “Rapha Festive 500” Strava challenge to ride 500km between Christmas Eve and New Years Eve I thought I’d give it a red hot go.

My motivations were varied but essentially I was sick of overindulging at this time of year and feeling like crap heading into the New Year. This time last year was particularly the case, our 1st Christmas in Philadelphia and as a mate was in town I took it upon myself to take him to pretty much every cheese-steak joint in Philly… Christmas Eve, 2014. How many chins can you count on the bloke in the Eagles hat? (Genos ain’t bad but Jim’s Steaks on South Street do the best cheese-steaks by far)

…resulting in a rather enlarged belly and a really lethargic attitude towards kicking off my 2015 Etape du Tour training. (a contributing factor to my poor prep for said event and piss poor performance)

And so it was decided, I would do the Festive 500 and head into 2016 with a real spring in my step……I mean pedal stroke, shed a kg or 2 and be ready and rearing to smash my training for the 2016 Etape du Tour.

Anyway, long story short I completed the 2015 Festive 500 in 20 hours and 52 minutes over 6 rides. (full Strava details here) I found the challenge a lot harder than expected, it really pushed me but it was incredibly worthwhile. I also learnt some valuable lessons that I’d like to share:

We all love to ride our bikes. We have chosen a sport that facilitates adventure, freedom, camaraderie and well being yet sometimes we can take each ride for granted and/or look upon it as a necessary chore in a fitness regime. I have been guilty of this and infact there were moments of “bugger I have to ride my bike today” during the Festive 500 but once I’m out on the road powering on the flat, flying down a hill,  I find that I am overjoyed I made the effort. Each ride really is special, take a photo to celebrate! 2. Be aware of the position of the sun when having a photo taken in full lycra:

The photo says it all really…. Ride 3, 28th December. Gaining inspiration from a the Rocky statue outside the Philadelphia Art Museum.

Perhaps I’m being a tad self conscious but I swear you can see what I had for breakfast. Suffice to say the spirit of Rocky helped with the 72km completed that morning.

I cannot tell you how invigorated and motivated I feel after completing the Festive 500.

I set myself a couple of big challenges (by my standards anyway) each year, namely the Etape du Tour and another big Sportive. Both are in the northern summer and the total amount of training I do for them is around 12 to 16 weeks or so and its very easy to loose focus over those 3 to 4 months, get a bit lazy and skip scheduled sessions. This has been compounded by the fact that since we moved to Philadelphia most of my riding is done solo, so I haven’t got others (as I did in London) to push me to get out for a ride when feeling lax.

From now on I’ll be scheduling regular relatively small challenges (whether they be Strava or other) during my training to keep fresh and motivated. I could of course join a club which is also on the cards.

4. Be a tourist in your home city and take your bike

As I set out to document my rides for the Festive 500 I took to thinking about what I should photograph along the way.

I ate up a fair slice of the 500km along the Schuylkill river trail as the roads in Philly are a tad dicey at this time of year and it is of course flat so I could chew through the kilometers at a faster rate. What it did mean however is that I was covering the same stretches of trail over and over again and I had to really look out for stuff to take a photo of. I felt like a bit of a tourist in my home town which is quite a refreshing change in mindset. It reminded me of the Sydney Olympics in 2000, my home town of 17 years at the time where I also found myself absorbed by the detail of the city, taking photos at will. Boathouse Row by night. An iconic Philly landmark although my photo doesn’t do it justice.

5. Be careful riding at night

I learnt the hard way here!

Most people would agree that Christmas to New Years is all about hanging out with family and friends. However, in order to spend some quality time with my wife and 2 young sons and knock out 500km at a time of the year where the days are pretty bloody short, I had to do a fair bit of riding at night.

It was in the homeward stretch of ride 4 on the 29th Dec at around 6:30pm where I hit a pothole, flew over the handlebars and hit the deck like a sack of…….. I think I scared passing motorists more than myself, suffice to say it shook me up a bit, but more importantly my bike was buggered… Ride 4, 29th Dec. My swan dive over the handlebars resulting in a bent handlebar and buckled front wheel.

Perhaps this accident may not have been avoidable but I will definitely be a lot more careful and aware of my surroundings when riding at night.

Despite brushing up on my bike mechanic skills recently I lacked the required knowledge and skill to fix my damaged bike and as my local bike shop was closed for a week it was looking like my first attempt at the Festive 500 was doomed to fail with over 200km still to do in 2 days.

That is if it wasn’t for my trusty old steel Cannondale Caad 9 who was just waiting patiently in the basement for just this moment…. My spare bike ready to save the day.

I had only really kept this bike for sentimental reasons as it was my first road bike but now look upon it in a completely different light as it is a more than suitable spare when my preferred bike is off the road.

7. Invest in a decent bike light

Knowing that I was probably going to be getting out for a ride when it was dark, either early morning or early evening over the winter of 2015/16 I requested a Garmin Varia bike light for Christmas and it certainly came in handy for the Festive 500. Ride 4, 29th Dec. Its all getting a bit Blair Witch on the Schuylkill Trail.

It also gives me peace of mind during overcast conditions knowing that I should be able to be seen by motorists.

Cycling is synonymous with so many things; adventure, freedom, fitness, going fast and camaraderie etc. It also fits hand in glove with good coffee.

With the increasing popularity of cycling, cycling friendly cafes are popping up everywhere and as I passed a newly opened bike shop and connected Cafe multiple times during the Festive 500 it would have been extremely rude had I not popped in for a flat white and danish… Ride 3, Dec 28. Riverbend Cycles and Cafe on the Schuylkill River Trail near Conshohocken.

These cafes offer an oasis of rest and recuperation as well as a great place to chat about the sport we love with other like-minded cyclists. These places deserve our support!

9. Riding outside is always better than an indoor trainer

As the winters in Philly can be pretty damn harsh I did the research and bought a Wattbike for last winter 2014/15. It is a great piece of kit that really helps with my training with power and measuring progress but I have been guilty in the past of using it as an excuse to ride inside when in actual fact the weather was decent enough to ride outside.

Being forced to ride outside as part of the Festive 500 at a time of the year that I may usually have hidden inside on the Wattbike really made me focus on how much better I felt both during and after a ride outside. The fresh air effect perhaps.

I find the key is to have the right gear. A good base layer and long sleeve jersey and/or wind jacket does the trick and keeps you on the road.

So yeah, a really enjoyable and enlightening experience which I’ll definitely be taking on again nexzt year.