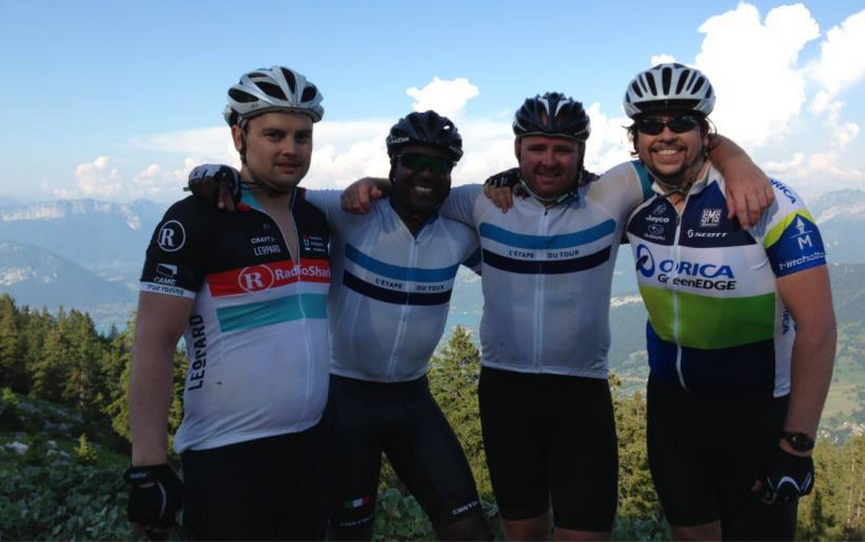 The 2013 Etape du Tour is my favourite Gran Fondo to date. There were four of us that did it and as we had never attempted such an event before it really felt like a great adventure at the time that we would all conquer together. They say you never forget your first….

The fact that my participation was part of a magic 3 week camper-vanning trip through France and Switzerland with Melissa and 14 month old Son Max also has a bit to do with me putting this event on a pedestal.

The route at approx 130km was a short one by Tour de France standards but promised to pack quite a punch, particularly for us newbies with 6 categorized climbs. As I have found since, Etape du Tour’s can be a logistical nightmare as far as accommodation and transport to and from the start and finish is concerned but the 2013 edition was ideal with the start at and near the town of Annecy. The start of the 2013 Etape du Tour was in the beautiful town of Annecy, the finish close to the start at the summit of Annecy-Semnoz.

The training plan I followed for this race was an intermediate level 12 week plan from a cycling magazine. It was heavy on interval work using heart rate but I just used it to get a basic idea of how many hours per week I should be doing. Each week I tried to get at least two 60 to 90 minute sessions during the week and a long ride with mates over the weekend.

By the end of this training period I felt the strongest I had every felt on a bike. I went from vomiting over the handlebars whilst traversing Broomfield Hill in Richmond Park to being able to smash out x 5 hill repeats on the same hill. I also lost around 7kg to bring me down to 98kg, the lightest I had been in at least a year but still a lot of weight to get up 6 categorized climbs in the Alps. All smiles after a practice ride up Annecy-Semnoz. (2nd July, 2013)

….and to explore the beautiful town of Annecy, which is known as Venice of the Alps. By the time registration came around we were climbing the walls with excitement. Although a poor quality video below I have included it as it really illustrates how excited we were as we cycle into Annecy to pick up our race number and timer etc. You also get an idea of the beauty of Lake Annecy. My live in head mechanic running through a last minute mechanical check.

‘Twas an amazing sight at around 6:30am to witness the gathering of over 10,000 like minded cyclists from all over the world….

There was quite a wait to start as we were in the last pen but before we knew where we were we were off on our first Etape du Tour!

As I mentioned earlier I am writing this post a good 2 and a half years after the event so all I can really summon from my rather dilapidated memory are a few bullet points: DG getting his dodgy wheel attended to at one of the Mavic Vans. One of my favourite ever photos. The 4 of us atop Semnoz. L to R; Wazza, Wilson, Me and DG. Back in the town of Annecy post “conquering” our first Etape du Tour. (Put it away Wazza)

As mentioned, I finished just after the broom wagon so I didn’t get an official time but my Garmin clocked me at around 10 hours (of which I was actually moving for just over 8 and a half hours). A long and tough ole’ day but damn worthwhile.

Strava stats from the day.

An amazing day! Lets do it again!

Day 8.... Off chasing buffalo and running from be

The morning after the Day 6 before due to bugger a